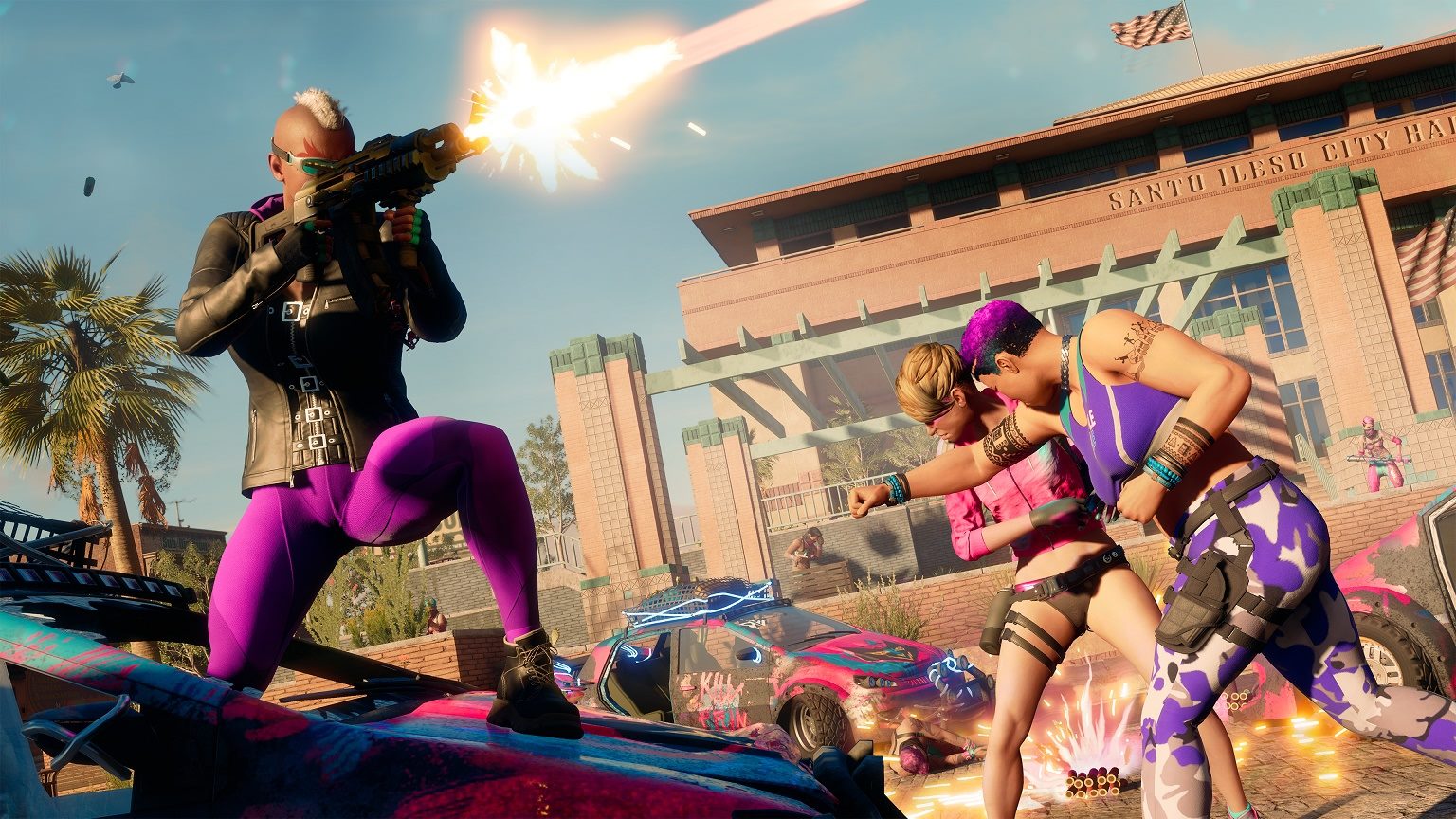 The latest work of the Clime Action series “Saints RowThe latest video for the media has been released. This work “Saints Row” whose numbering has been abolished as a new work that reboots the series. The contents of the newly released attractive gameplay video are introduced below.

The stage of this work is the fictional city “Sant Ireso” in the southwestern United States. Santo Ireso is divided into nine districts, each with unique characteristics and gameplay. At first, the “Saints” to which the players and their friends belong do not exist, and the game begins with the aim of becoming independent as a new criminal organization rooted in the city.

The video begins with a scene in which the main character and his crew attempt to rob the “Saints”. The protagonists, who succeeded in taking out cash but were chased by the police, will develop a car chase with a police car, but here the new game mechanics “Sideswipe” of this work will be introduced. This is a brush-up of the ramming by the vehicle as an element of the gameplay, and the higher the speed, the more powerful the ramming, and the pursuit vehicle can be exploded and destroyed. ..

Santo Ireso is a city full of opportunities and offers a variety of side hustle. The simplest and easiest side job is to destroy an armored car parked on the street with explosives and collect cash from it. In addition, a side hustle called the “passenger seat” is introduced in the video. This mission is to support the escape of the client of the jewel robbery from the passenger seat, not only to shoot a gun from the window and attack the pursuit vehicle, but also to lie down on the top plate of the car and shoot “car surfing” The absurd mechanics are prepared.

The money earned from these side hustle can be fully used in Old Town. “Saints Row” puts a lot of effort into character customization, and all types of costumes are available. Purchased costumes can be changed at any time with a customized app that can be called from your smartphone in the game, and there are more than 100 emotes that you can freely use in the city.

Not only the player but also the car customization is abundantly prepared. In Jim Rob’s garage, more than 80 types of base vehicles can be freely modified for each part. Of course, you can paint and paint freely, and by clearing the challenge, you can unlock special abilities such as “Ejector Sheet” and “Infinite Boost”.

The main mission will be mainly related to the expansion of our team “Saints”. One of the main missions introduced in the video is to destroy a building called “Blacksmith”, which is also a symbol of the rival organization “Los Panteros” mentioned above. Raid members of “Los Panteros” who enjoy barbecue from the air with a missile-armed civilian tourist helicopter. It invades the building from the roof, and after that, the main mission is hand-to-hand combat. Customization that can be called from a smartphone allows you to freely change skills, so in the video, throwing grenades as an active skill and a park that enhances fire resistance as a passive skill are attached.

In hand-to-hand combat, the hero can bring in various weapons and fight while using them properly. Each weapon has its own unique ability generated by clearing the task, and burst rifles with increasing damage to the vehicle will be a big success in this mission. In addition, since the main enemy this time, “Los Panteros”, is an enemy with strong style characteristics centered on close combat, it is important to select weapons and skills accordingly.

The ruined church, which is the headquarters of “Saints”, will grow in size as “Saints” grows. In addition to being able to arrange more than 100 types of props and furniture to create an original headquarters, all customization elements such as vehicles, weapons, appearances of friends and costumes are also accessible from this base.

Another function provided at the base is the “war table”. Wartable is a system that establishes venture companies called “criminal ventures” in each of the 14 vacant lots in the city. These companies are a cover for criminal activity, and as they are established, new gameplay will be lifted and at the same time regional control will progress. For example, establishing the aforementioned Jim Rob Garage will lift the ban on car customization and gameplay called the “chop shop,” and Chalpa Kabra will be able to control drug trafficking by controlling the food distribution network.

In the video, there are other co-ops that can be seamlessly rushed in, a wing suit that can fly after being ejected from the vehicle, and a kidnapped companion against the third criminal organization “Idols”. The main mission to recapture is also introduced. Both are chaotic and ridiculous, with a humorous story and gameplay, and are fully open to the “Saints Row” character.

“Saints Row” will be released on August 23 for PC (Epic Games Store) / PS4 / PS5 / Xbox One / Xbox Series X | S. It looks like it will be a title that will keep an eye on new announcements in the future.

Jacky on the run, sentenced for kidnapping his five children: “I did what my duty as a father commanded me”

Mai Ezz El-Din shocked all her fans after she sent a message to her husband.. The artist revealed her secret in public!! (shocking details)