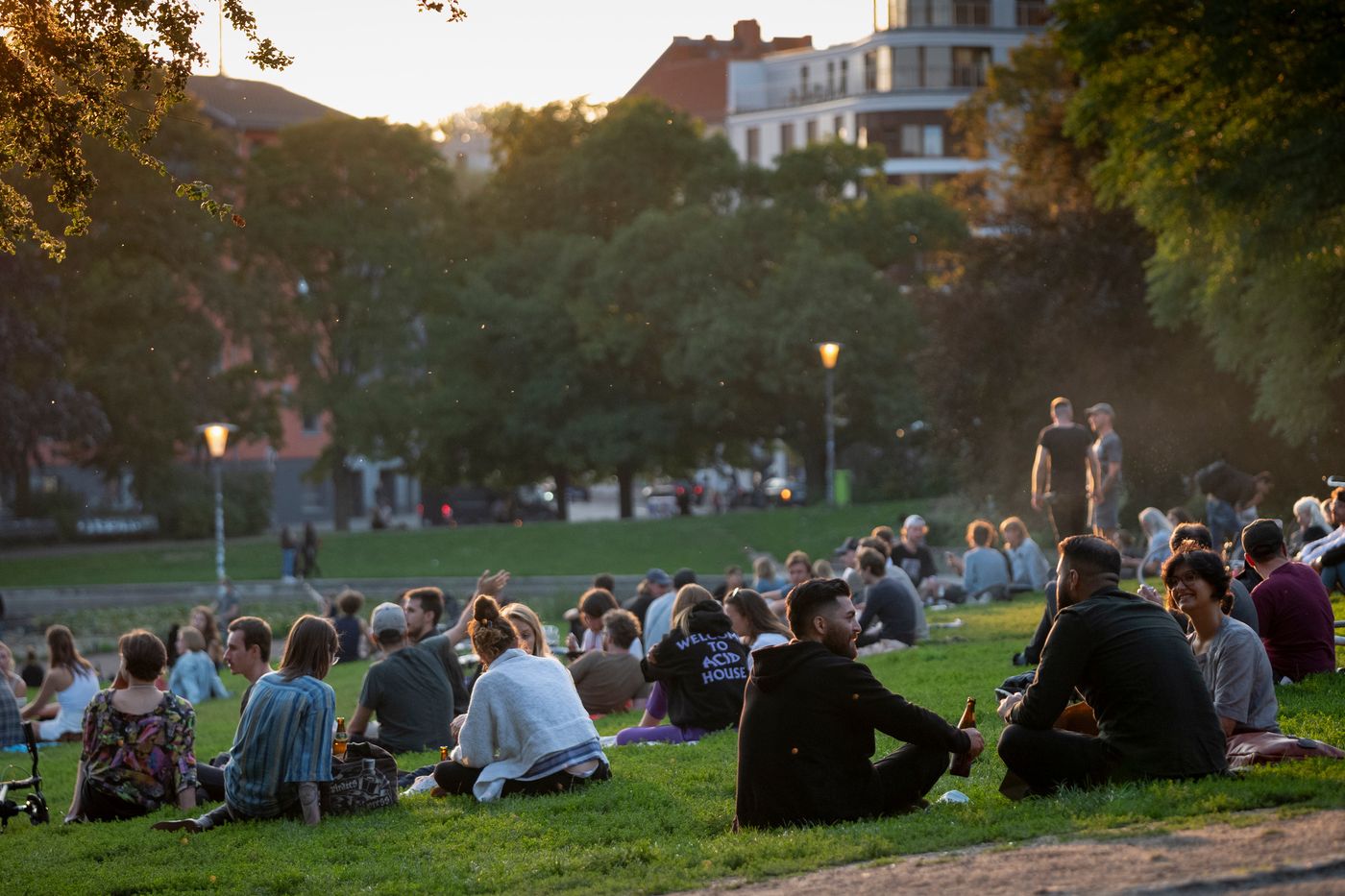 Görlitzer Bahnhof, in Berlin. Caps screwed on the head, two dealers watch the customer at the bottom of the stairs of the metro station. Moldovan Roma camp on a corner of the lawn below the overhead railway line. A few meters further on, on Wiener Strasse, you can see the glass dome of the Omar-Ibn-Al-Khattab mosque, frequented by Palestinian and Lebanese immigrants.

A former stronghold of the alternative counter-culture, Kreuzberg remains the heart of the Turkish and Arab community in the German capital. In the 1960s, the Gast­arbeiter– the “guest workers” to meet the labor needs of German companies – had settled by the thousands in the apartments deserted by their occupants in this district surrounded by the construction of the Wall. After reunification, tourism and gentrification transformed the landscape again.

→ OUR SERIES. No Merkel effect for German women

Alper was born in this district in 1994. Her father Zacharia landed there in the early 1970s at the age of 5. His grandfather, Hussein, had brought his wife and nine children from Trabzon, a Turkish town on the Black Sea. Zacharia met Marianne, a German gallery owner. “My grandparents had a mini-market, my uncle a furniture store, and my father made a living delivering restaurants and renovating apartments”, tells Alper, brought up in a cosmopolitan atmosphere where life is organized around the family, a tribe reconstituted around Hussein, the patriarch.

“The advantage of not being called Mohammed”

A master’s degree at the Mannheim Business School concluded a flawless academic career in 2020. “I never felt discrimination during my studies”, assures the young man, consultant in a firm of chartered accountant. “There were a lot of Turkish children in primary school. In high school in Friedrichshain, I found myself with children of Vietnamese immigrants from the GDR. I have the advantage of not being called Mohammed. When people look at me, they don’t necessarily see that I am of Turkish origin. “

He was therefore not obliged, as the journalist Ferda Ataman recounts in a book, to constantly explain where he came from, what he thought of Erdogan or of the wearing of the headscarf. “I belong to a very mixed family, he adds. I feel German, with Turkish colors for culture and tradition. “

Multiple in its history and regional identities, Germany has long been a country structured by immigration. More than one in four Germans have at least one parent born abroad. “Reality took hold in the 1990s”, recalls Franck, 58, a former neighborhood manager. “The Gastarbeiter children have become visible. The fall of the Wall put immigration at the forefront with the reception of several million returnees from the former Eastern bloc and the admission of asylum seekers. Governments could no longer continue to pretend immigration did not exist. “

If Turkey remains the first country of origin of immigrants and their descendants, the arrival of 1.14 million asylum seekers in 2015 has diversified the mosaic. Syria comes in third position. Arriving in Germany in 2015, via Turkey and Greece, Mohammad Fazaa, 32, a telecommunications engineer, landed a job at Deustche Bahn, the public railway company.

“Luck doesn’t knock on your door, you have to go get it, says this native of Homs. I learned German and I did a year of voluntary civil service in an association. There I met a volunteer who helped me find a job for three years at the Berlin University Hospital. “ One of his sisters lives in Frankfurt and Mohammad Fazaa hopes to bring the rest of the family from Syria. And, of course, get German citizenship, “A security”.

In six years, he has familiarized himself with the codes and rules of the game. Across the Rhine, Facebook groups of Syrian engineers circulate job offers. A survey by the public bank KfW affirms that migrants have less aversion to risk and are often carried by the entrepreneurial culture of their environment. These are all qualities that can make the difference in the job market.

“The future of Germany will be hybrid”

“Immigrants have a lot of opportunities, confirms Mohammad. You have to get moving, face complicated administrative procedures, face discrimination when looking for accommodation, but society is behind people to help them. The German economy needs young people to innovate. “

As an aging society, Germany has realized the need for immigration. The integration policy has focused on language learning and training, often eluding the cultural and religious dimension, questions such as the place of women in society or the relationship to criticism or freedom of expression. ‘expression. “Bubbles coexist, reflecting plural affiliations and identity recompositions, without always communicating, analyzes Daniel Gruschke, senior manager at the Charité hospital. Germany’s future will be hybrid. The fact remains that confidence in the system depends on the economic success which makes it so attractive. In the event of difficulties, it risks weakening and losing its legitimacy. “

Between opening and closing, the “refugee crisis” of 2015 left its mark on society. Katja, 39, at the time engaged in welcoming refugees in Spandau with the organization Humanistischer Verband, remembers“An intense moment filled with emotion”. “The civil society solidarity movement has had paternalistic aspects, she continues, but it has contributed to setting up reception structures and to launching the debate on an “We” negotiated and built with all. It’s a fluid process, in the works. Collective identity cannot be fixed forever, as society changes. “

Education, “the key to success”

In Neukölln, a district of 330,000 inhabitants in the south of Berlin, a quarter of the population does not have German nationality. “The key to success is education”, insists Martin Hikel, 35, in his office at Karl-Marx-Strasse. Elected mayor in 2018, this former teacher has invested 130 million euros over three years in neighborhood schools. “The average German remains skeptical of diversity, notes this Social Democrat. An immigration law to clarify the rules would make it easier. We need more transparency to become a proud country of immigration. “

Pastor Jasmin El-Manhy, in her church in Neukölln. / Maurice Weiss for La Croix

Still in Neukölln, Jasmin El-Manhy, 40, pastor at Genezareth Kirche, dreams of a more intercultural Protestant Church, open to meeting and sharing. “Not with those who think like us but with people who have had different experiences, she specifies. Everyone should be able to feel respected and recognized. “

→ REPORTAGE. In Germany, the integration of migrants remains a challenge for Neuruppin

Daughter of an Egyptian Muslim and a German Catholic, Jasmin El-Manhy was baptized after graduating from high school, before studying theology at Humboldt University. “I sometimes feel like I have the status of an exotic person, she says, but I have a story to tell. I was born in Berlin, I speak German and Arabic, I am an integral part of this society and I am a bridge for people who are like me. “” As the philosopher Jean-Luc Nancy says, she adds, it is a matter of existing in communication with others, without identification and without fusion. “

A quarter of the population with an immigrant background

More than one in four Germans, or 26% of the population, has at least one parent born abroad. Rates reach 36.5% in Bremen, in northern Germany, 34% in Hamburg and 33% in Berlin. The 7.4 million Germans with an immigrant background who have the right to vote represent 12% of voters.

An immigration law was adopted in 2004, comparable to the legislation of other European states.