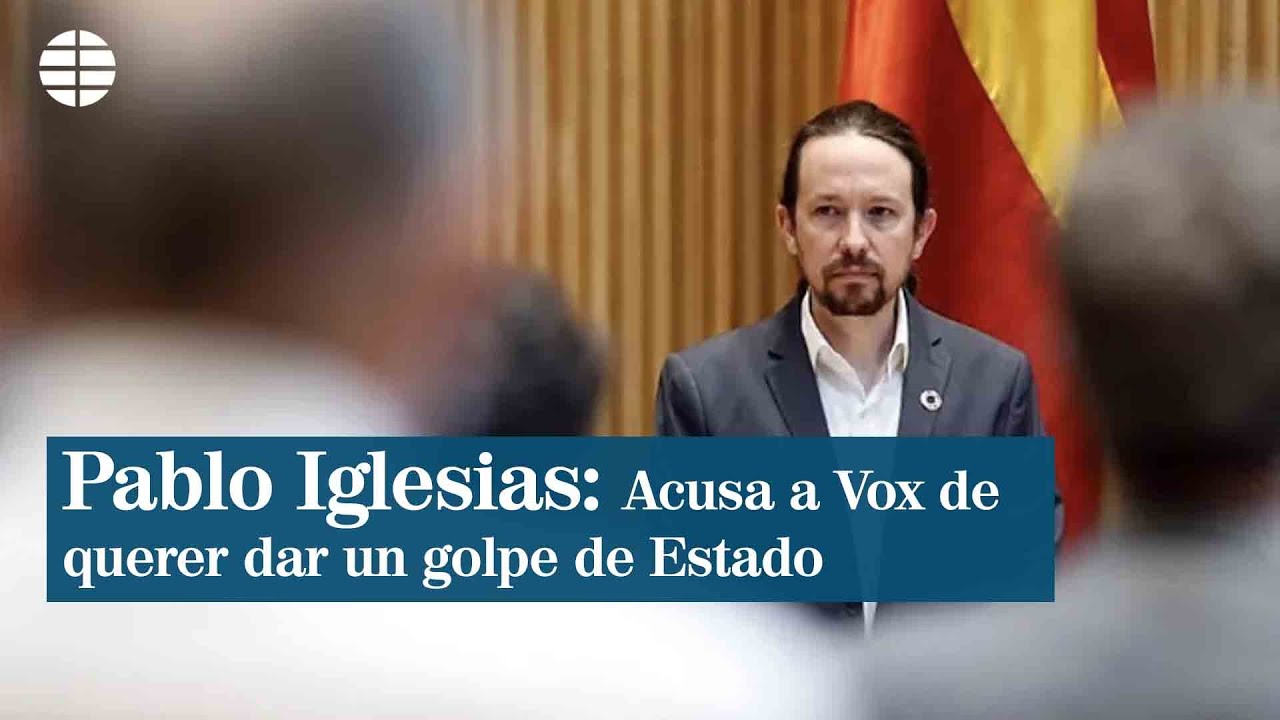 The vice president urges the confrontation with the right, blaming the PP policies for the damage caused by the coronavirus crisis and he declares himself ready to dialogue with the fugitive Puigdemont “because many Spaniards vote for him”

The second vice president, Pablo Iglesias, has accused Vox of wanting to carry out a “coup d’état” but “not dare” to do so. I stated this in theReconstruction Commissionof Congress in which he also blamed the PP directly, and the policies put in place from 2012 to alleviate the recession that the country is experiencing, the damage caused by the current coronavirus crisis and all the difficulties with which it has encountered the Government to face it.

Iglesias emphasized in his appearance that this “is not a time for reproach or analysis”, but he embarked on a comparison of the measures adopted in this crisis with those that were put in place to overcome that of 2008 and that, in In his opinion, they were “a failure”. In addition, he faced Vox, a party that, in his opinion, “would like to carry out a coup d’état” although “he does not dare to do it.”

These words were the subject of an angry protest by the spokesman for this formation, Ivn Espinosa de los Monteros, who dismissed them as “intolerable” and immediately left the room. “Close the door when you leave,” replied a defiant Iglesias, who found the support of the president of the Commission, the socialist Patxi López, for whom the vice president’s statements were nothing more than an exercise in “freedom of expression”.

See Also:  Hacking Migrations: the file on the asylum requests of Cubans and Syrians

Espinosa de los Monteros, after leaving the meeting, accused Iglesias of “bursting the Reconstruction Commission” and demonstrating with his attitude “his inability to govern”. “Est,” he said, “in the same key as when he was a student and called to take to the streets, he performed escraches, he prevented those who did not think like him from speaking, and he called for violence.”

Just a couple of hours later, when the Commission met again to celebrate the appearance of the third vice president, Nadia Calvio, President Patxi López opened the session asking for “apologies” for, he said, “not having been to the height”. Also the representatives of Vox have reconsidered and have returned to the meeting. In López’s opinion, in the morning session with Pablo Iglesias, there were “unnecessary expressions and behaviors”, something “that the citizen does not expect” from parliamentary work.

For this reason, he called for “rethinking for what and by whom” are the deputies in the Reconstruction Commission. “Let us honor what has brought us so far,” he stressed, “people who need us to agree so that their lives are not worse.” Vox has accepted the apology request, calling the gesture “honorable.”

In the morning session, Pablo Iglesias also collided with the PP, a party that, he stressed, welcomes “some people” who intend “to take the opposite path from the one he did in his dayManuel Fraga“that is to say” from the criminal dictatorship to democracy. “Thus he made reference, tacitly, to the spokesperson for thepopularin Congress, Cayetana lvarez de Toledo, with whom she starred yesterday in a very difficult confrontation in the plenary session of the Chamber.

In this way, the harsh echoes experienced in the control session to the Government have been replicated today in the Reconstruction Commission. Iglesias pulled the thread that he himself launched yesterday in his face to face with the secretary general of the PP, Teodoro Garca Egea, when he accused him of nothing less than promoting involvementism and of encouraging an “insubordination” of the Civil Guard.

In favor of the dialogue with Puigdemont

Churches also, to questions from the representative of thepopularin the Reconstruction Commission, he was “totally ready to dialogue” with the fugitive Carles Puigdemont because, he said, “he is the head of a political formation that many Spaniards vote for.” It was at that moment that he assured that he was even open to speak with Vox representatives despite the fact that “it seems that they are going to carry out a coup.”

The second vice president devoted most of his speech to directly blaming thepopular, to which he expressly addressed, to remind them that “the cuts of more than 7,000 million euros” that “perpetrated” in public health have had direct consequences in the current management of the crisis, and urged them to “recognize” that this “has subtracted instruments fromSpainto deal with the pandemic. “

In his opinion, the production model “with low added value, based on the ball, has weakened us as a country”, and “has made us depend on third-party markets” when it comes to supplying the necessary material that healthcare needed in this crisis . According to him, the cuts in the PP have also been to blame for the dramatic situation experienced by nursing homes. In this sense, I bet on “rebuilding the industry”, including a nationalization plan to guarantee self-sufficiency in the event of new pandemics.

He also chanted in favor of “urgently intervening in the housing market to ensure that there are never again families who cannot access it” and advocated “rebuilding the labor rights that were devastated by the 2012 labor reform”. In this sense, he stressed that the Government is already “dismantling the labor reform with a social dialogue” and plans to continue doing so.

The vice president finally bet on carrying out a “more democratic” tax reform that would allow for reconstruction. “It does not seem sensible to anyone that 10% of the population accumulates more wealth than the remaining 90%,” he said. As a result, he advocated a more redistributive system that would forever set aside “fiscal amnesties” like the one carried out by the Popular Party. This is, he said, “a matter of patriotism.”

In his recipe to “go from words to deeds and to be real patriots and not just wristwatches” a reconstruction tax is essential, a tax on great fortunes to boost the country “.

Despite this allegation, in fact an amendment to the entire policy of the Rajoy government, the second vice president assured that his intention is to “reach out” to all to undertake the reconstruction of the country with an “expansive spending policy” and with “public investment”. To put this into practice, he stressed, “The ideal framework is theConstitutionand its social articles as a common denominator. “