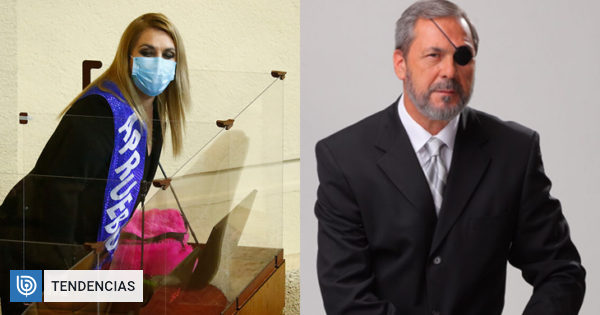 This Thursday, TVN issued a new chapter of the Special Report, which was dedicated to analyzing the social outbreak of October 18, 2019. In charge of its traditional host, the journalist Santiago Pavlovic, the program did a factual review and cited expert opinions.

The treatment of the program did not go down well with many users of social networks, who denounced the production of the program for “Criminalize protests” and carry out a “face wash” on Human Rights issues.

One of the most acidic, however, was the former work partner and current deputy of the Humanist Party, Pamela Jiles, who through Twitter recalled the accusations he had already made against Pavlovic, accusing him of having served as a collaborator of the Dictatorship.

Decades ago I noticed that Santiago Pavlovic participated in DINACOS operations, was TVN’s press director when the dead floated in the Mapocho, collaborated with the dictatorship and was awarded a scholarship to Germany. Now he whitewashes Larraín and criminalizes the protest. #InformeEspecial

Jiles was referring to a column of hers from 2005, published in issue No. 143 of the weekly The Clinic, titled “Complicit Faces”, where he reproached him for having been director of the TVN Press Department “at the service of Pinochet” and not having said anything “about his colleagues who were arrested, persecuted, tortured and killed during that period.”

“He was the star journalist of the maximum organism of propaganda and cover-up of the dictatorship, awarded for his services to Pinochet with a scholarship in Germany, after which he was reinstated in glory and majesty to the journalistic staff of the regime, destined to hide them violations of human rights that today he denounces with regret “He noted on the occasion.

But at that time Pavlovic tried to respond to Jiles through the same medium, in a column also published by The Clinic, where he not only explained his relationship with the state channel in those years, but also with the legislator herself.

Below, we reproduce the response of the Special Report journalist in full.

The ineffable Pamela Jiles stands as the judge of some “faces” on Chilean television and somehow asks for a Mea Culpa, and in this kind of neo-McCarthyism she alludes to me.

See Also:  Hamilton thinks they want to arrest him with ridiculous penalties

What can I say before I reply with my own volleys to this self-righteous location?

On many occasions I have spoken of the subject. I started working at Televisión Nacional in 1970 and continued working there after 1973. I worked at TVN during that period and it is not something of which I am particularly proud. But I am not very proud of having worked in the period when the Canal was administered by the UP. In both periods it was used as a political trench and the pluralistic journalistic criteria, typical of democratic societies, were not respected. The error, as Don Ricardo says, then gave way to horror. We had uniformed censors who dictated what could be broadcast on the air. But, like many Chileans, I needed to work, I had a wife and children, and I also harbored the dream since my student days: to write in a media that could once become a voice other than the business press, as I believe TVN is today .

After September 11, journalists such as the Colodro sisters, Patricio Caldichoury – current Head of Information for Chilevisión-, Gazi Jalil – current Editor-Chief of TVN-, René Schneider, Alipio Vera and many others who were never sympathizers continued to work on the Channel. of the coup d’etat.

In the months that I was acting boss – my friends at the time at the channel, Gonzalo Bertrán and Emilio Benavides, persuaded me to assume the position and avoid possible abuses – I did not fire any journalist or cameraman. Indeed, some professionals went into exile and others were arrested, including Dennis Jones, who continued to report on National Television until his arrest and whom I visited in jail. I even remember that Lucía Sepúlveda, a Mir journalist, went to my apartment in Villa Portales to withdraw her last wages.

Professionals from different currents also worked with me, including my friend Patricia Politzer, whom I brought to the Channel in 1973 and who years later would also be a friend and boss of Pamela Jiles on TVN, but whose name she does not mention in this naughty reckoning. .

Certainly I only lasted a few months as Acting Chief of the Press because I was formally accused, and with good reason, of not participating in the principles of the Governing Board and the Director of the Canal himself, Colonel FACH Eduardo Sepúlveda, a good-natured man and good person He informed me that General Augusto Pinochet considered me an “infiltrator.” I was replaced and “underwater” for a time while trying to get a scholarship to study abroad; I started doing special reports that were never broadcast, I worked as an editor and then I got a scholarship to study film and television in Germany. Later comes a long curricular history …

See Also:  he silences her and threatens to leave

Today, Pamela is dedicated to witch hunting and I am not surprised. It’s part of his style ex post, something rogue and for sure. When he was in the Special Report and on TVN he never complained about anything, he never signed a letter of protest for any censorship or for any editorial difference with the channel’s management, or with the TVN Board of Directors. He never had a public reaction to certain media that attacked us for our coverage of human rights. He never accompanied us in a journalistic fight, never got his feathered ass wet for something or someone. She was always seen profiting from her good relations with the Director of the Channel, Jorge Navarrete, the same one who was Press Attaché in the days of Pinochet in London, but whom she is careful to mention in her chronicle.

I believe that many decent, good, brilliant people, many of them, are not happy with the memory of those years. They must have worked in a bitter hour, there were mistakes, but to speak of complicity is to put salt on the wound, it is knowingly lying and gratuitously insulting.

Ineffable Pam … Always boasting of her contacts and family relationships with steep and tight soldiers like her relative, General Izurieta Caffarena …

Always abusing with her derogatory and lewd treatment of cameramen, pagers and assistants who ended up hating her. Suavecita with the ones above and damn with the ones below. (Curiously, it was Pam, the only journalist who has left the Canal without anyone regretting it, without a farewell dinner, without someone remembering her with affection and consideration).

Cameramen have never forgotten their “creative” expense surrenders. (What a good lady to transgress!)

One says almost admiringly: “If laziness and dishonesty were virtues, Pam would be a saint.”

Work, perseverance, rigorous reporting – at least at TVN – were always alien values ​​and unbearable burdens for Pam. So I have sometimes helped her and made amends for her displays of overwhelming ignorance. Being her boss, I sent her more than once to report abroad so that she would have a certain international touch and even if it was due to osmosis some English or French would stick to her (nothing!) …

Pam complains today about not being on television, but she has been one of the ones who has had the most opportunities on National Television and she had many of those opportunities in Special Report and in other programs but she generally missed them because she always looked for the easy way , exploiting cameramen and production assistants, unloading on them their non-delegable responsibility … If he had spent in serious reporting the same time he spent putting on makeup, dyeing blonde, looking in the mirror and feathering his butt, he could have done something moderately redeemable. But no, she prefers to pass and pose for being a politically persecuted person when, in short, everything indicates that she was fired for systematic loafing. In any case, that helped him to successfully dedicate himself to pornography, opinology and farandulogy …

On one occasion, I sent her to interview Muhammar Gaddafi in Libya and she had a panic attack. On the third day he called me from his Hotel in Tripoli, hysterical, tearful and scared, because they were going to perform a blood test, prior to meeting Gaddafi. Of course, the pre-arranged interview did not take place. One more fiasco of this brave transgressor to the fart, whose moral superiority smells rotten.

It should be noted that Pavlovic was not the only one who spoke about the alleged mistreatment that Jiles would have had with his co-workers. In 2011, the journalist Jennifer Warner briefly touched on the subject during the program “True Lies” on La Red.