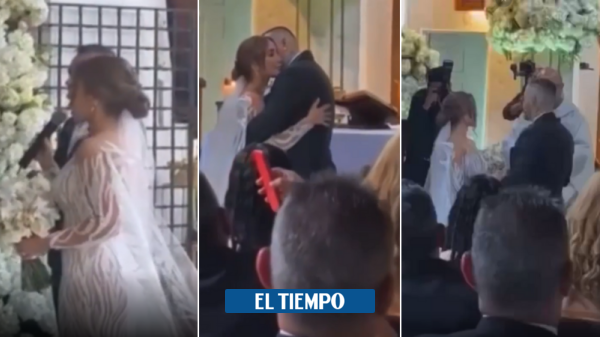 One of the most important entertainment news of the year occurred in the last few hours: the singers Paola Jara and Jessi Uribe got married. The love story that began about three years ago, has been involved in controversy and was revealed with the song “Como si nada” ended at the altar with a kiss, in Medellín, Antioquia.

The woman arrived in a classic pink convertible car and surprised the attendees by singing at the ceremony ‘There are loves’ by Shakira: “Oh my love, like the Magdalena River, which melts into the sand of the sea, I want to sink into you (…) There are loves that become resistant to damage, like wine that improves with age, like this what I feel for you grows,” he heard as he entered the church.

(You may be interested: Did Paola Jara celebrate her bachelorette party in the company of her friends?)

The woman was dressed in a white one-piece dress and a veil that hung from her head to the ground.designed by Jorge Duque. A frame of white flowers and candles on the floor greeted her. Jessi Uribe was dressed in a black suit. The ceremony was private with few guests. Jorge Celedón was present.

In another well-known video, it is seen when the couple kisses after saying “yes” at the altar. A choir accompanied the moment. For several seconds they embraced and the singer whispered something in the woman’s ear.

(Besides: Jessi Uribe loses lawsuit before the SIC for use of the word ‘repeat it’)

In several interviews, Jessi Uribe had said that she wanted them to “throw rice in the middle of music”, something that was fulfilled. At the end of the ceremony, the guests received them with flower petals and rice, something traditional in Colombia.

In the entertainment media there have been rumors of eccentricities for the wedding party. Several have published images of the wedding on Saturday afternoon. What was known in recent days is that the honeymoon would be in Dubai.

They will launch unmanned test flight to the ISS

Maxi Rolón died: the Argentine striker trained in Barcelona was killed in an accident on the road