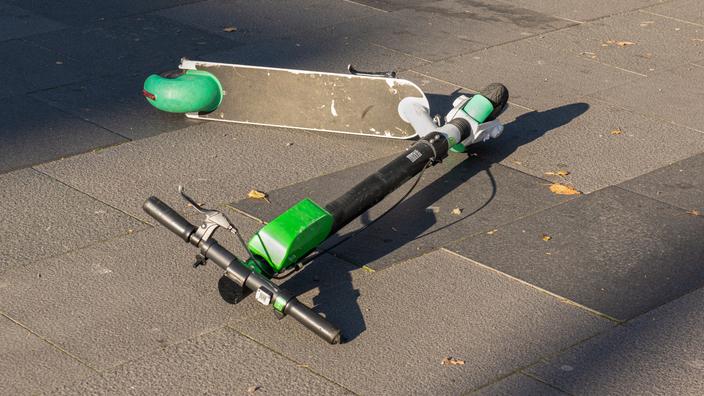 David Belliard summoned the representatives of Lime, Dott and Tier after the death of a young woman struck in mid-June by on a pedestrian alley along the Seine.

The Paris city hall threatened on Tuesday the three private operators of self-service electric scooters operating in the capital not to renew their contract if they do not make progress on the speed limit and parking.

Read also :The “alarming behavior” of electric scooter enthusiasts in the time of Covid

“Either there is a significant improvement in the situation and scooters find their place in public space without causing disturbance or additional danger, especially for pedestrians, or we are considering the total elimination of scooters” electric self-service at the end of the contract in October 2022, explained to AFP David Belliard, the deputy (EELV) of the mayor PS Anne Hidalgo, in charge in particular of transport. Ban these private fleets, “There are cities that have done it, in the suburbs, internationally”, recalls David Belliard, citing New York, Barcelona, ​​Boulogne-Billancourt or Issy-les-Moulineaux.

The deputy environmentalist summoned the representatives of Lime, Dott and Tier (the three private operators chosen in July 2020 for a 2-year contract and which have 5,000 vehicles each), after the death of a 32-year-old Italian woman, hit in mid -June by an electric scooter on a pedestrian alley along the Seine. Besides this recent drama, David Belliard says he has “A lot of negative feedback on the scooters that roll on the sidewalks, the feeling of insecurity, the scooters that hang out in the street again” since the end of confinement.

In October 2019, the government regulated the use of electric scooters, gyropods and other monowheels, the use of which has exploded in recent years with in particular the rise of self-service rentals (“free floating”). By law, these machines must not be able to exceed a speed of 25 km / h, can only carry one driver and must circulate on cycle paths. As of summer 2019, the City of Paris limited the speed of electric scooters to 20 km / h and prohibited their parking on sidewalks.

David Belliard asked operators to limit the speed to 10 km / h maximum in areas of high pedestrian density. As of Wednesday, this maximum speed will have to be respected in “slow zones” of the center of Paris (Halles, République, Bastille …), according to the entourage of David Belliard who wants to extend this device “in the coming weeks” in front of the schools or other areas with high pedestrian density. The fee voted in 2019 for this contract was to bring in nearly one million euros per year to the city.