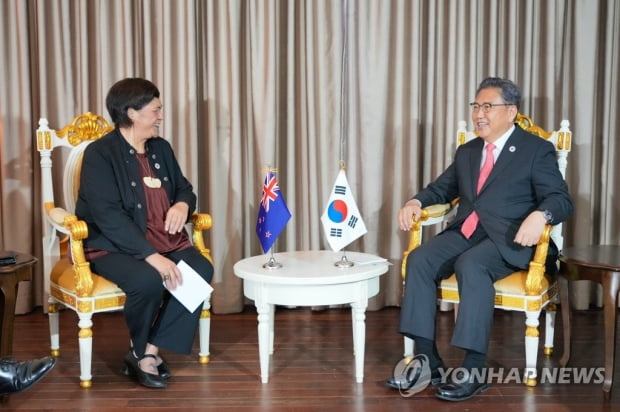 Minister of Foreign Affairs Park Jin, who is attending a series of ASEAN-related foreign ministers’ meeting held in Cambodia, held a meeting of foreign ministers with New Zealand and Brunei on the 4th and discussed the regional situation and ways to develop relations.

According to the Ministry of Foreign Affairs, Minister Park had a meeting with New Zealand Foreign Minister Nanaia Mahuta on the same day and in-depth discussions about the situation on the Korean Peninsula and the Indo-Pacific region.

The two Ministers agreed to strengthen substantive cooperation, mentioning that high-level exchanges are continuing, such as being invited to the NATO (North Atlantic Treaty Organization) summit in Madrid as four Asia-Pacific Partners (AP4).

In particular, we agreed to strengthen communication and cooperation on major regional and global issues, including Pacific Island States, based on the consensus that the basic values ​​shared by both countries, such as liberal democracy and market economy, are an important foundation for cooperation.

Minister Park also introduced the strong will of the Korean government to host the 2030 World Expo in Busan and asked for support.

The Minister and the Minister welcomed that direct flights between Korea and Brunei, which had been temporarily suspended since the outbreak of COVID-19, are scheduled to resume from this month, and hoped that people-to-people exchanges between the two countries would become more active.

The Brunei side also told Minister Park, “I am happy that there are a lot of K-pop fans in Brunei, so the demand for direct flights will increase,” an official from the Ministry of Foreign Affairs said.

The two sides also discussed ways to strengthen economic and security cooperation, including cooperation at the level of the Indo-Pacific Economic Framework (IPEF) and the Regional Comprehensive Economic Partnership (RCEP).

The Egyptian Saif al-Adl: The Egyptian commando officer who is likely to assume the leadership of al-Qaeda

“He doesn’t have enough respect to say hello?” »