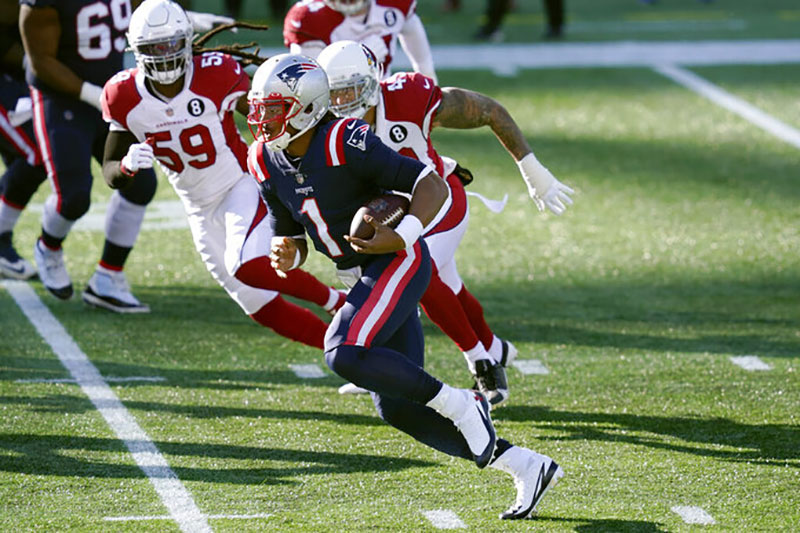 New England fans will have to get used to it: nothing will be easy for New England this year and even victories will be hanging by a thread. Against Arizona, the Patriots were not particularly good, they would probably even have lost this game if not for a missed kick from Zane Gonzalez from 45 yards late in the game.

But like their quarterback Cam Newton (9/18, 84 yards and 2 INTs), the Massachusetts players have heart and courage. Two qualities which enabled them to emerge victorious from this duel and above all to always believe in the post-season.

The half-time score (7-10) only half reflects the physiognomy of the first thirty minutes. If the Patriots are still alive at the break, they owe it to two things. First and foremost thanks to this 4e attempt at a yard in their end-zone. While Kyler Murray (23/34, 170 yards and 1 INT) and the Cardinals are about to score their second touchdown of the game just before entering the locker room, New England stops Kenyan Drake (22 races, 78 yards and 2 TDs) thanks to a superb effort and a big solidarity. The second factor that keeps the locals in the game is not in defense or attack, but in special teams.

A mammoth punt from Jake Bailey who cornered Arizona on his line from 3 yards and a return kick from Donte Moncrief on 53 yards which put his attack in good position. Two actions which may seem trivial, but which are good for a team that has hitherto been in difficulty. It must be said that Cam Newton’s first pass attempt was blocked and then intercepted to give the first points of the game. Especially, during the first two quarters, the attack of New England does not advance. The ground game is well stopped and Cam Newton does not succeed. But again, the quarterback and the Patriots are going to come back to the mental. Thanks to their special teams then, then a touchdown from James White on a 7-yard run and finally this famous 4e tentative.

An intense duel between Gilmore and Hopkins intense

The locals will even manage to pass in front after the break. Thanks to a field goal and a new touchdown from James White on their first two drives of the second half, New England regains control (17-10). Above all, the defense puts a lot of pressure on Kyler Murray who seems disturbed. As announced, the duel between Stephon Gilmore and DeAndre Hopkins (5 receptions and 55 yards) is one of the most exciting of the game. In turn, the best defender of the year 2019 and the receiver take the advantage over their direct opponent. Somehow, Arizona still manages to find its way back to the end-zone. On a drive of 16 games and 80 yards, Kenyan Drake crosses the small yard which separates him from the 7 points and the two teams find themselves back to back.

At that point, each team will have the opportunity to win. For the Patriots, this chance to win ends up in the hands of the opponent. Once again Cam Newton throws an interception. The Cardinals then go the other way to put their kicker in good position. Unfortunately, Zane Gonzalez, usually so efficient in this kind of situation, misses and gives the ball to the men of Bill Belichick. A godsend for Cam Newton who has the opportunity to make up for it. Once again, the attack brings few guarantees, but succeeds, with the courage and with the selflessness of his quarterback, to put himself this time in a position to win the match.

Nick Folk does not miss him and New England wins. A crucial victory for the Patriots who will now travel to California to play the two teams from Los Angeles. On the other hand, this defeat does a lot of harm to the Cardinals who do not really have the right to make mistakes in a raised NFC West. In front with 10 points in advance during this game, Arizona could not fold the meeting for lack of experience. The Cardinals have a great team, but still have to improve to win this kind of meeting if they want to establish themselves as real underdogs.