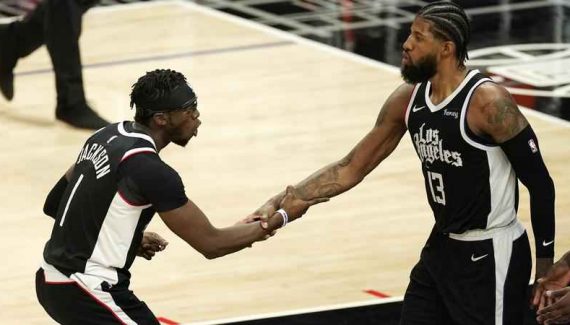 Kawhi Leonard injured, Reggie Jackson has asserted himself for several matches as the most reliable Lieutenant to support Paul George. The former leader of the Thunder and the Pistons amazes more than one by his nerve, but also his lucidity in hot moments, and at the heart of this tandem, there is a ten-year-old friendship. Asked about their very strong links since they even lived together, Paul George is very proud of his friend’s performances.

“We dreamed of it. We dreamed of it ” he repeats to ESPN. “There were a lot of nights when I was at the Pacers and he was at the Pistons, where we had considered playing together for the same team. We didn’t know where, but we wanted to play together. Today, we have the chance to do it and we take advantage of the moment. It’s just great doing that with someone you genuinely love, and you have fun. “

During confinement, he trains in Paul George’s garden

15 months ago, after being cut by the Pistons, Reggie Jackson explained that it was ” surrealist “For him to play with” his best friend in NBA“, And that he was just happy, every evening, to say” see you tomorrow ! »

During confinement, it was also at Paul George’s that Reggie Jackson had found refuge to train, squatting in the garden of a house that his teammate did not occupy …

“Paul had a second home in Los Angeles, and he wasn’t in it” he said last summer. “I was bothering him to be able to go there, just to go shoot outside.” It was to get out of my four walls of my hotel room ”.

Today, Reggie Jackson is fine with his mind and his basketball, and after considering giving up basketball when he was in Detroit, he has become a major player for the Clippers. Tonight, his 23 points went a long way in their first ever conference final victory, and Tyronn Lue is genuinely happy for him.

“At the start of the season, when we extended Reggie, our staff were talking about him as a potential start, because of the way we wanted to play with Kawhi and PG. And when Pat Beverley has been injured several times this season and Reggie did indeed take over. He did a great job then. Our stats with him as the starter were out of the ordinary, as with Pat, but offensively, we really took off. You know, as soon as he got into that role, he made it easy for PG and Kawhi, he was the source of our attack and he never stopped doing it. I’m just happy for him. He’s had a hell of a year, we just have to keep going like this. “