– PD Notebook, an exclusive interview with Pastor Kwang-Hoon Jeon. The truth behind the 50 billion won in compensation and the use of donations revealed by the former pastor

– The PD handbook and articles of incorporation that obtained the document contain the content that the president cannot be held responsible for the results of the execution, so members cannot raise any questions about the use of donations.

– A former pastor who purchased real estate with church finances. However, as a result of the PD notebook investigation, some of them were purchased in the name of an individual rather than in the name of the church.

On the night of the 27th, PD Notebook reported on Sarang First Church and Rev. Jeon Kwang-hoon, who received 50 billion won in redevelopment compensation and large land. The abbreviation ‘association’ has been litigating over the issue of compensation through litigation with the name of the company since May 2020. The union won the first and second trials and carried out six executions (compulsory execution) against the church. However, the church’s enforced execution did not go as planned due to the fierce resistance of the church members. Then, in January 2022, the Supreme Court ruled in favor of the union, but on September 6 of the same year. The media reported a shocking report that the union decided in favor of providing 50 billion won in redevelopment compensation and 15 billion won of land to the church after the general meeting.

Based on the initial evaluation of the negotiations, Sarang First Church received a compensation of tens of billions of won, which is greater than the 8.4 billion won offered by the union. On September 16, Pastor Kwang-Hoon Jeon celebrated his victory by handing out 100,000 won gift certificates to those who visited the church. The amount they used for gift certificates, etc. they said was a whopping 1 billion won. PD Notebook conducted an interview with Pastor Kwang-Hoon Jeon to hear his position on the incident. Pastor Jeon said, “The trial was wrong from the beginning. Park Won-soon and Moon Jae-in are trying to arrest me.” Lee Seong-hee, a lawyer for Sarang First Church, argued that the Seoul Metropolitan Government’s plan to promote reorganization in 2008 included religious facilities 10-2. That this place was designated as the new site of the church. In response, an official from Seongbuk-gu Office said, “There is nothing in the special law for the promotion of urban renewal that requires religious facilities to exist.” Pastor Jeon cited the Seoul ordinance bill as another reason for not handing over the church to the union. Religious facilities should be considered to be preserved first. A Seoul official said that Pastor Jeon’s basis was not an ordinance. “It is an internal policy. It has no legal effect.” 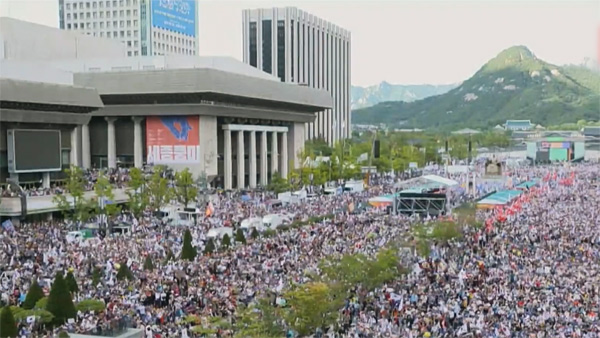 As Pastor Kwang-Hoon Jeon led the Gwanghwamun protests in 2019, the number of members of Sarang First Church increased dramatically. He went to protests by the so-called patriotic conservatives and many became church members. Kang Hyeon-suk (pseudonym) also said that he first met the former pastor in Gwanghwamun. Kang said the former pastor had been homeless for about four months when he held a tent demonstration in front of the Blue House. She explained the situation at the time, “At first, pay money to build a Christian office, then pay money to build a Christian office, and then spend money again to say that you will be freed for Christian unification,” and “I took money every time I worshiped, and since then I haven’t been there,” she explained. The cause of the donation that Pastor Jeon requested was varied. In addition to the expenses for running the church, it was a fundraiser necessary for the so-called patriotic project.

According to Pastor Kwang-Hoon Jeon, the monthly offering of Sarang First Church is about 5 billion won. In August 2020, Lee Dong-wook, president of Gyeonggi-do Medical Association, stood at the Gwanghwamun protest site with a former pastor. He said, “(Former pastor) deals mostly with cash. Give the people around you 10 million won to 100 million won in cash. The person who received the money has a weakness.” He said only the former pastor knew where the funds were spent. So far, there has never been an accounting report. He explained that if you ask him how he spent his money, he would become a reactionary in the group. The reason why the church could not raise an issue about the use of donations was because of the articles of incorporation made by the former pastor. Among the contents of the articles of incorporation, in the personnel and finance items, it was stipulated that “personnel and finances of this church are delegated to the chairman of the session according to the decision of the session, and no responsibility for the execution results is held.” Accountant Hoyun Choi, who has been in the church finances and non-profit corporations for over 30 years, pointed out that there are many problems with the charter of Sarang First Church. “The fact that it was delegated to the chairman of the session according to the decision of the session means that the chairman does all the financial execution one by one.” In addition, Article 3 of the Church’s Articles of Incorporation contained the contents of ‘to protect the Republic of Korea and the Korean Church from communist humanism’ and ‘Projects to protect Korea from communism and sectarianism’ in the Article 4 project.

The production team met a member of the church who was well aware of the internal affairs of the church. He said, “There are long-time evangelists. I bought more than 10 villas in Myeonmok-dong under their names. That’s the way they do it,” he said. Myeonmok-dong, Jungnang-gu, Seoul is a model area for moa housing that reorganizes outdated residential areas. In 2021, before this site was confirmed as a demonstration area, the elders and ministers of Sarang First Church bought the local real estate, and in the process, some of the church finances went into it. The PD notebook found several names matching the members of Sarang First Church among those who bought houses in Myeonmok-dong. Most of them were ministers, such as elders and evangelists. Pastor Jeon admitted that he used church money to purchase a house in Myeonmok-dong. “You bought a house for our educators. He explained that he was only helping homeless members because the evangelists said that the property value of Myeonmok-dong would increase. He asked the church finance elder if he had paid his taxes properly, and he was told why he had to pay it.

Pastor Jeon’s side called the producers of the PD notebook to the church. To check how frugal the former pastor is. There is a temporary building on one side of Sarang Jeil Church, and this is Pastor Jeon’s first residence. He said he lived here and moved to a house next door, where he lived for 20 years. However, as a result of checking the PD notebook, the former pastor and his wife’s home was not all there. A residential and commercial complex called the landmark of Seongbuk-gu. The apartment costing 2 billion won was owned by the former pastor’s wife. It is the place where the daughter of the former pastor currently lives, and the elder in charge of church finances said that he personally bought it for the homeless pastor, but the former pastor said, “The elders bought this. I bought it with the concept of a church house,” he said. If you bought real estate with church finances, of course, you should have signed a contract in the name of the church. A five-story building purchased under the name of Sarang Jeil Church earlier this year. The interior construction of this place, which had been started for a while, was to be used as the former pastor’s residence by decorating one floor as a family home. There was another real estate purchased in the name of Sarang First Church. In an apartment with a sale price of 800 million won, the son and wife of a former pastor lived. All three of the properties that were bought with church finances were confirmed to be houses of the pastor’s family, or they are currently living there. Real estate didn’t end there. Newspapers in the church subscription movement. The representative of this place was the daughter of a former pastor. Most of the advertisements posted here are businesses that the former pastor is running. The full-page advertisement of the World Christian Office, which is published almost without exception. As a result of the PD Notebook asking the newspaper company for the amount of full-page advertisements by phone, it was estimated that Sarang First Church spent about 1 billion won on advertisements for the Christian Church alone. In a typical church, church money was the property of all members, so the pastor could not dispose of it at will. The same was true of the redevelopment compensation. Pastor Kwang-Hoon Jeon set up his son, Evangelist Jeonnok, in front of the church members from 2021. A former pastor who looked forward to his son returning from his studies. In July of this year, he asked the church members to “delegate all rights and the entire process of the project to Pastor Kwang-Hoon Jeon and the only begotten Evangelist Jeon Nok.” When the PD notebook asked about the situation in which he suddenly got a job from the evangelist Jeon Nok, whom he met at the church, he replied that he would not be given the job suddenly, saying that he was going to be entrusted with external projects such as missions and youth projects. . Choi Ho-yoon, an accountant for the Church’s Financial Health Movement, said, “Because I don’t trust other people. Let your son do it. He points out the problem that it could be hereditary in itself. “Even if it’s not me, someone can lead me at any time.” That’s what a community is. On the other hand, “It can’t be me. He expressed his view that it could be transformed into “my company, that is, a private company.”

Moritz and Franz Wagner ready to start training in Orlando