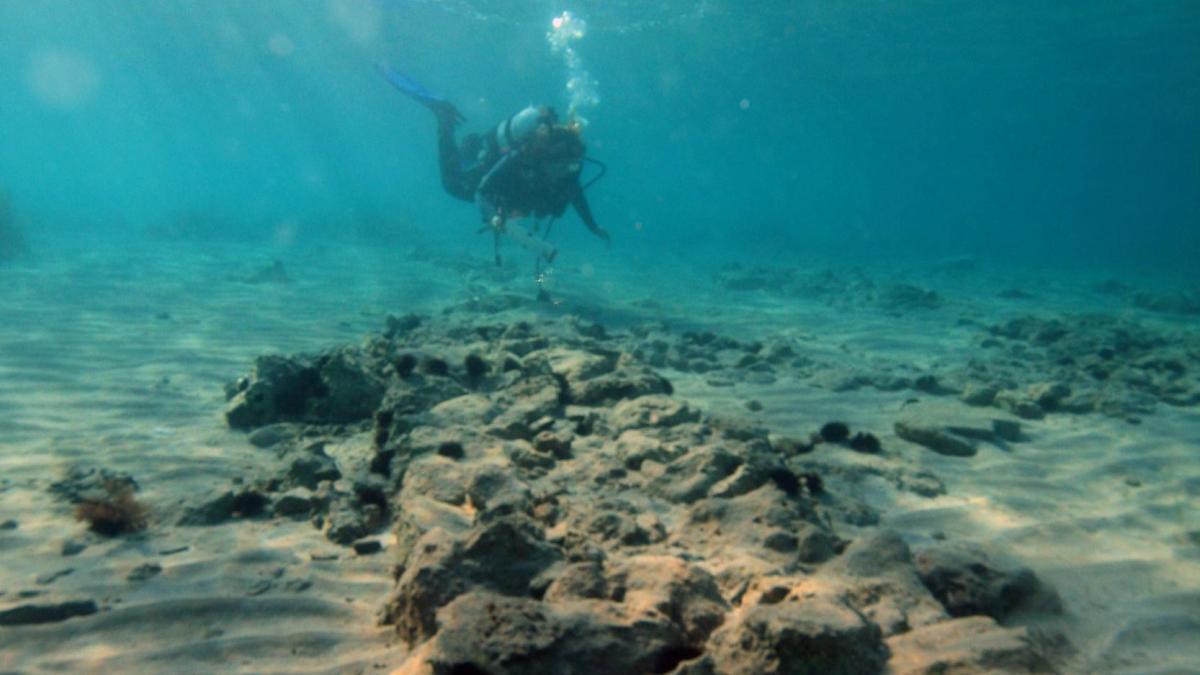 “Are you sure that we are right here?” I am standing on a gently curved sandy beach on the index finger of the Peloponnese, southern Laconia. The water tickles my toes, which I balance on so that I can see as far as possible into the bay in front of me. The Mediterranean is as smooth as silk, the coastline at the other end of the bay is rocky, in the sand in front of me there are countless tiny shells and snails.

Our travel companions Tom and Sophie heard of a sunken city that is said to be close to the beach and only a few meters below the surface of the water – close and shallow enough that you can snorkel through the ruins. Even if the thought is obvious, it is not about the Atlantis first described by Plato, but about the remains of Pavlopetri, the supposedly oldest sunken city in the world.

This doesn’t detract from our curiosity. The traces of civilization that archaeologists have found here on the seabed of Greece date partly from the Neolithic. The ruins of Pavlopetris extend over thousands of square meters in this bay.

Snorkeling off the coast of the Peloponnese

And that is where the challenge begins, because above the surface of the water it is impossible to tell where exactly the city is. Alleged signs, which our travel companions have also heard of, cannot be discovered and snorkelling the entire bay is out of the question, as that would exceed the time frame and overwhelm our strength.

While I am still stretching and trying absurdly to discover something with the naked eye, my friend Mathias calls up a satellite image of the bay with his cell phone. We use this to try to orientate ourselves as best we can. In the end, however, we stalk into the sea at random – diving masks on our noses and in the hope not to have to swim too far.

The water is crystal clear, we can see effortlessly all the way to the sea floor. I drift a little, unsure of what to look for. Wall remnants? Buildings, pillars, archways? A yellow-spotted moray eel lazily jerks out from between the stones on the seabed, next to it fish, otherwise all I see is empty space.

Suddenly Mathias dives into a vortex of air bubbles. He picks something out of the sand and holds it under my nose: a broken clay handle, it could have come from an amphora. Or not, I think to myself, and let the shard fall again. Allegedly, robbers and tourists have already grazed the sunken city extremely thoroughly and taken away a number of antiques and souvenirs.

But Mathias discovered more. He makes a long, straight movement with his arm along the sea floor. I follow his outstretched finger with my eyes, then I see it too: half hidden in the sand, a dead straight line of stone runs into blue infinity.

We snorkel over the row of stones, which suddenly turns at a right angle. Too symmetrical to be natural in origin. Excited, I dive closer, enlarge my circles and slowly more and more geometric shapes become recognizable in the sand: Small and large rectangles, hewn cuboids and again and again the dead straight remains of the wall – or are they fragments of former streets?

An earthquake caused the sinking of Pavlopetri

Who were the people who lived here 5000 years ago, I ask myself as I emerge to catch my breath. What was your everyday life like, what were your worries and why is your home under the sea today?

At least I find an answer to the last riddle in our van that evening. An internet search tells me that Pavlopetri sank into the sea about 3000 years ago due to an earthquake. Rising sea levels prevented the rebuilding of the city, which scientists say may have served as a trading center.

However, their remains have been severely damaged by anchored ships and trophy hunters, which might be an explanation for the lack of signage, I wonder.

As I shake the sand out of my shoes, I am glad that the sea has betrayed this secret to us.

The author blogs at thehappyroad.de.