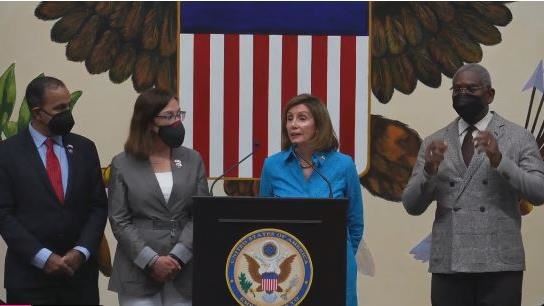 ▲ Pelosi visited Japan today to meet with Fumio Kishida. In the press conference after the meeting, he condemned China’s behavior of launching missiles during military exercises. (Picture / Authorized by ASSOCIATED PRESS)

US House of Representatives Speaker Nancy Pelosi’s visit to Taiwan has triggered tensions across the Taiwan Strait, and the Chinese People’s Liberation Army has announced that it will conduct military exercises around Taiwan. After leaving Taiwan, she made a whirlwind visit to South Korea and Japan. Today, she had breakfast and talks with Japanese Prime Minister Fumio Kishida. The two reached a consensus to maintain peace across the Taiwan Strait. Regarding the large-scale military exercises by the Communist Party of China, Pelosi led a delegation to a press conference at the U.S. Embassy in Japan earlier. During the press conference, she strongly condemned China’s conduct of military exercises in the waters around Taiwan. She also stressed that “China should not use her visit to Taiwan as an excuse.”

Pelosi held a press conference at the U.S. embassy in Tokyo on the morning of the 5th, and she publicly condemned China’s missile launch during the military exercise. Pelosi pointed out that China should not use the US delegation’s trip to Taiwan as an excuse to launch missiles. At the same time, when talking about the U.S. policy toward China, she also emphasized that she will continue to attach importance to the stability of the Taiwan Strait. In addition to Pelosi’s strong condemnation, Japanese Prime Minister Fumio Kishida condemned China’s actions during the breakfast meeting with Pelosi and demanded an immediate cessation of military exercises.

On the other hand, Pelosi pointed out in the press conference that the United States will “not allow” China to isolate Taiwan, “They may try to prevent Taiwan from participating in international organizations, such as the World Health Organization, or to visit other places, but not through Block our visit to isolate Taiwan.”

▲ Pelosi pointed out that China should not use the trip of the US delegation to Taiwan as an excuse to launch missiles. (Photo/Retrieved from Twitter @SpeakerPelosi)