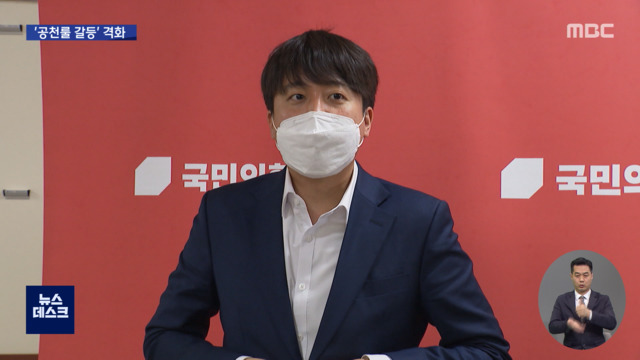 In Power of the People, a conflict is escalating over the nomination rules between Rep. Hong Jun-pyo, who declared his candidacy for Daegu mayor, and Kim Jae-won, the Supreme Council member.

In addition, as former CEO Seung-min Yoo is known to be actively considering running for governor of Gyeonggi Province, the checks against other candidates are also getting fiercer.

On the 21st, the People’s Power Supreme Committee decided to deduct points in the nomination review if an active member of the National Assembly applies for a nomination or has a history of running as an independent in this local election.

Rep. Hong Joon-pyo, who received a 25% reduction in nomination points for falling under both provisions, has been strongly protesting for over a week.

Rep. Hong also wrote a letter of opinion to the party today, saying, “I cannot accept that I have to run for the first time while being punished for what I did wrong.”

In particular, he criticized Kim Jae-won, who directly participated in the nomination-related decision, saying, “The referee has set an unprecedented rule to play as a player” and “the right to be fair and fair has been sabotaged by personal greed.”

Kim, who officially announced his candidacy for mayor of Daegu, declined to comment on the related controversy.

“Likewise, it’s a problem that I have to sort out.”

Previously, Supreme Council member Kim Jae-won blamed CEO Lee Jun-seok for the resolution of the deduction rule, and then started a battle for truth.

The internal competition for the Gyeonggi governor election is also getting fiercer.

As rumors arose that former lawmaker Yoo Seung-min, who was running as a presidential candidate, would be elected, former lawmakers who had already declared their candidacy began to focus on ‘migratory bird politicians’ and ‘put down without cause’.

“Whether it’s Yoo Seung-min or former member of the National Assembly, many other people have nothing to do with Gyeonggi-do.

Former lawmaker Yoo, who has not yet made an official statement, said in an interview with the media that he would make a decision on whether to run for office this week.

This is Kim Jung-in from MBC News.

10 provinces infected with the most covids Bangkok No. 1, 3,248 cases – Post Today, general society

Russia and Ukraine: Zelensky describes the removal of Russian forces from all Ukrainian lands as impossible and means the outbreak of a “third world war”