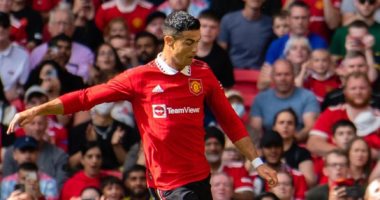 Real Madrid president Florentino Perez was shocked during the European Super Cup by one of the fans who suggested the return of the Portuguese Don Cristiano Ronaldo, the Manchester United winger, during the current summer transfers, expressing his astonishment at the proposal he received.

A crisis erupted between Cristiano Ronaldo and the management of Manchester United because of his desire to leave the ranks of the Red Devils, in search of a new place to participate in the Champions League this season.

According to the newspaper “Marca”“ The Spanish club, a number of Real Madrid fans, who stayed in the same hotel where the riyal stayed, before the European Super match, demanded Perez to return Ronaldo to the royal team..

Florentino Perez responded to the Madrid fan: “Cristiano? Again? At 38 years old?” The newspaper pointed out that the president of Real Madrid left the fans of the royal team, laughing.

Cristiano Ronaldo is going through a difficult period with Manchester United, and does not want to participate in the European League, and is looking to leave for a team that participates in the Champions League..

A doctor reveals the health benefits of consuming frankincense infusion