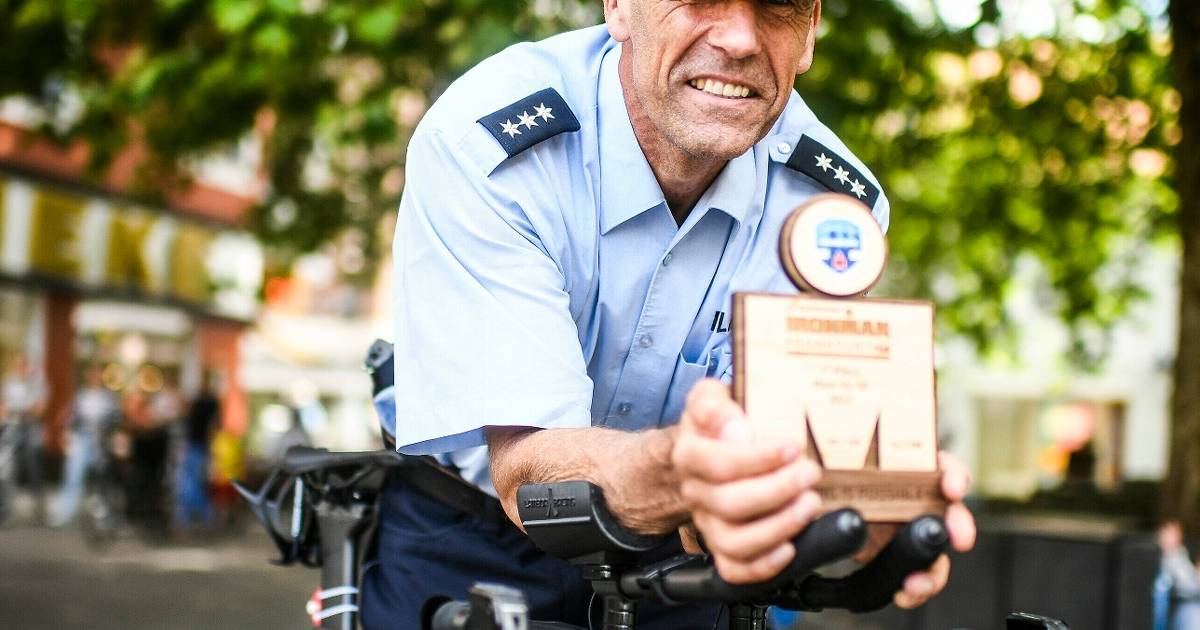 Garath/Hellerhof Peter Lohmann is the new Ironman European Champion and has qualified for one of the toughest competitions in the world in the United States. Professionally, he works as a district officer in Garath and Hellerhof.

Peter Lohmann compares his running style with a car drive. “I’m more of the diesel type,” says the 57-year-old. He runs only moderately fast, but very reliably and at a constant pace. Discipline is one of Lohmann’s sporting strengths. But he also masters cycling and swimming. So good that the police officer became Ironman European Champion in the 55 to 59 age group in Frankfurt am Main at the end of June. Lohmann has once again qualified for a legendary and extremely tough triathlon competition: the Ironman in Hawaii.

Lohmann had secretly hoped for success even before the start in Hesse. “I wanted to become European champion in order to qualify for the island directly,” says the athlete. His wife and daughter optimistically booked accommodation in Hawaii for 2022 last year – in case of victory in Frankfurt. Peter Lohmann is proud that he is actually the winner in his age group. “I’m incredibly happy about the support of my family and my colleagues,” he says. “It’s unbelievable how many people have followed all this and what a positive response I’m getting.”

Launch in Hawaii on October 8th

Ironman The Ironman in Hawaii will take place on several competition days this year. Peter Lohmann will start on October 8th. The disciplines of the triathlon competition are swimming (3.8 kilometers), cycling (180.2 kilometers) and running (42.195 kilometers).

sponsors So far, Peter Lohmann has always financed participation in the Ironman competitions himself. He says he would be happy to have a sponsor.

Hard work preceded the victory: Lohmann had to swim a distance of 3.8 kilometers at the Frankfurt Ironman. Then he gets on his bike. He rides 182 kilometers through the Taunus. This is followed by the marathon. The 57-year-old also successfully covered the 42 kilometers with the finish line on Römerberg. In total, he needs 9 hours and 43 minutes for all disciplines. “The changeover times, for example for moving between sports, are included in the time,” explains Lohmann. In the end, one thing is certain: out of a total of 3000 starters, he is in 156th place and is the European champion in his age group. Nothing stands in the way of the Ironman in Hawaii, which takes place in October.

Lohmann is already very familiar with the competition on the Pacific island – also from the perspective of the participants. He has already been allowed to start there four times. This year, however, he will compete for the first time with the title of European champion. “The competition simply casts a spell over you,” says Lohmann. He was always impressed by the serenity of many Hawaiians, swam with colorful fish at the event and had to endure heat of more than 40 degrees. Precisely because of the extreme temperatures and the strong waves, the Ironman there is considered one of the toughest competitions in the world.

Lohmann can count on his family to prepare. “My son is a triathlon coach,” he says. 26-year-old Felix has already supported his father in Frankfurt; called him current times and commented on his run. “My wife and daughter always have my back,” says Peter Lohmann happily. This is necessary because the sport means a lot of time. He trains almost every day to achieve personal bests.

Lohmann, who lives in Monheim and, as a district official, is primarily responsible for the Garath-Südost and Hellerhof areas, is also receiving many congratulations from his colleagues these days. “The police force is always about physical ability. Peter Lohmann’s success has a radiant effect on his colleagues,” says Norbert Latuske, Head of the Police Inspectorate South. The athlete is released from duty for the competition in Hawaii.

Lohmann has an ambitious goal for the Hawaii Ironman this year: he wants to take the world champion’s trophy home for the first time.

Watch.. an elderly man falls from his car on a public road in Riyadh.. and a young man saves him at the last moment