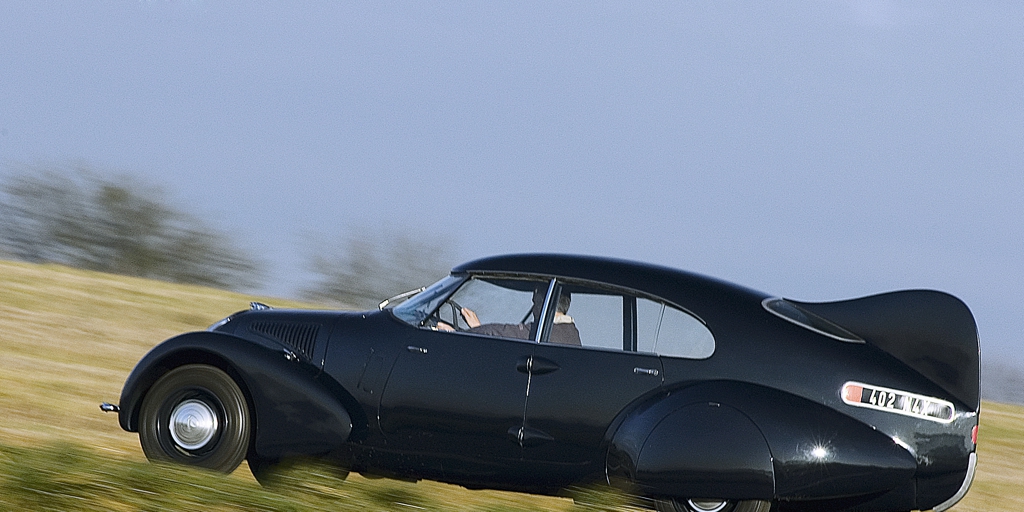 The year is 1935. Peugeot launched its model 402. Successor to the 401 and 601, it is an elegant saloon that is considered at the same time as one of the first series cars in which aerodynamics take priority importance. It is a car 4.85 meters long, equipped with a 1.9-liter four-cylinder engine, which provides it with a power of 55 HP. It is offered in three body variants (saloon, coupe and cabriolet) and also in a long version of 5 meters. One year after its presentation, the 302 appears, shorter and less powerful (4.50 m and 43 CV), and the 202 (4.11 m and 30 CV). In total, Peugeot manufactures 78,000 units of the 402 between its launch and 1940, when production was cut off due to the German invasion. After the war, in 1945, the economic situation made Peugeot resume only the production of the 202, the most economical of the saga.

But let’s go back to 1935. At this time, in France the works of the engineer Jean Andreau, a prestigious expert in aerodynamics, stand out. He had graduated from the Saint-Cyr military school, and after being seriously wounded in 1914, he was declared unfit for armed service, entering the technical service of the army, where he would excel in the design of profiled artillery shells and also for the aviation.

After World War I, he began his work in the automotive field, from suspensions to engines. developing various technical solutions whose objective was to make more accessible what he considered a means to have more freedom and that, therefore, should be available to as many people as possible. In this sense, and after the second world conflagration, he came to conceive the Mathis 333, from 1946, a small and aerodynamic three-wheeled car, with a curb weight of 380 kilos, built with classic materials and procedures, which allowed to transport three people (265 kilos of payload), at 100 km / h, with a consumption of 3 liters of gasoline per 100 kilometers.

Andreau, as a recognized expert in aerodynamics, carried out numerous works in the automotive field, such as the bodywork of the Hispano Suiza H6C Xenia or the Thunderbolt fairing of Captain George Eyston, which reached 594.97 km / h in 1939.

At the beginning, we highlighted the aerodynamic lines of the Peugeot 402. But the brand wants to go further and commissioned a study by Jean Andreau on the basis of his saloon. The engineer conceives a new body, but without the cost limits that a series production model can mark. Of course, he has signed a contract with the Sochaux brand by which his remuneration is set according to the kilometers per hour gained in relation to the 402 series.

The fins are elongated and profiled. At the front, the windshield takes on rounded shapes, and its pillars are thinner. A drift-shaped spoiler appears at the rear, inspired by airplanes.

It is announced that, in addition to a fuel saving of 30%, this 402 has a top speed that is 20 km / h higher than the series model. Actually, with 127 km / h they have gained only 7 km / h: the coefficient of penetration (Cx) is 0.37 compared to the expected 0.28. Of course, the figure was not, even so, not bad at all because the series model had a Cx of 68. And it does not benefit much that the new body, made by the Labourdette firm, is much heavier than the original.

In any case, the style of the 402 Andreau is a commercial claim. The car was exhibited at the 1936 Paris Motor Show, where it became a true star, attracting a large crowd to the Peugeot stand.

Although the 402 Andreau is spoken of as a single model, six bodies were actually produced. But they were not all the same, they had slight differences from each other. One of them (the only one that is preserved today), offered a panoramic glass surface. Others had thicker windshield pillars, like the stock model. The first of the six prototypes, was clearly different from the rest, even by its denomination: 802. Externally identifiable by a four-piece windshield, under the hood it hid a V8 engine (hence its name), 3.2 liters of displacement. and 80 hp of power.

This engine will be mounted on another eight 402s as standard (although larger than the original), which will never be put on sale since the study of this version will be cut short by the outbreak of World War II.

As for the six Andreau built, it is known that three (including the famous 802), were sold by Peugeot, probably in 1939, to collaborators of the brand.

Only one 402 Andreau has survived, which is in the Adventure Peugeot museum in Sochaux. This unit was purchased in 1967 by a well-known collector named Hubert Auran, who found the car in a small advertisement, for 12,000 francs, the price of a new 404 of the time.