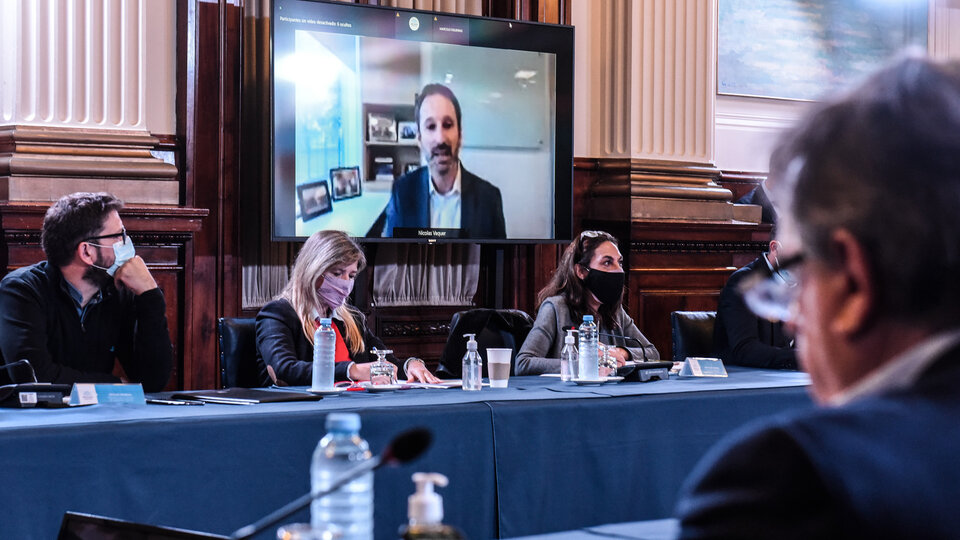 The manager of Pfizer, Nicolás Vaquer, was categorical in denying that the Argentine government had made a “request for undue payments or the existence of intermediaries” during the negotiations for the acquisition of vaccines and confirmed that the laboratory was holding conversations with the Ministry of Health and the Legal and Technical Secretariat of the Nation to advance in a future agreement. During an informative meeting in the Chamber of Deputies, the Pfizer representative finished debunking the complaints from opposition figures of alleged “returns”, and acknowledged that the reason why an agreement had not been reached it had to do with the fact that “the legal framework is not compatible with some contractual aspects” required by the laboratory. The ruling party for the moment ruled out the possibility of modifying the vaccine law, but assured that it was willing “to do whatever it takes from Congress to safeguard the lives of Argentines.” The informative plenary also included the participation of the president of the Richmond laboratory, Marcelo Figueiras, which will produce the Spuntik V vaccine.

“There was no request for undue payments or demand for intermediaries at any time during the negotiations,” repeated more than three times throughout his presentation, the manager of Pfizer, Nicolás Vaquer, in front of the deputies of Congress. During this first informative meeting with representatives of laboratories that signed agreements for the provision of vaccines with the national government (or that are currently in talks to do so), Vaquer ended up clearing the speculations that had been generated around the accusation of the president of the PRO, Patricia Bullrich, regarding the fact that the Ministry of Health had requested bribes from the pharmaceutical company during the negotiations. “Pfizer is willing to move forward with Argentina in signing a contract and when we are in a position to sign it, we will make an offer with volumes and delivery dates,” said Vaquer, who confirmed that the laboratory is currently holding “conversations. with the Ministry of Health and the Legal and Technical Secretariat “for the purchase of vaccines. At the same time, he clarified that the company “has no interest in intervening with State assets” both “natural, Central Bank reserves or cultural assets.”

“It is the power of the Executive Power to decide with which vaccines and with which ones it does not advance in its strategy to fight the pandemic,” the representative of Pfizer during an informative plenary in which the focus of the questions of the legislators was centered in finding out what had been the problem that had blocked the signing of an agreement. “Today the legal framework is not compatible with some of the contractual aspects proposed by Pfizer. Although I am not a lawyer, it has to do with indemnity and other protections that are part of the contractual framework,” he explained. Although he insisted that Pfizer “does not require any change in the law” for the purchase of vaccines, Vaquer implied that the current regulation was “incompatible” with Pfizer’s contractual requirements, although he did not give details about what he defined as incompatible.

Neither slow nor lazy, from Together for Change they quickly came out to demand the modification of the law so that it could conform to the demands of Pfizer. “The government is responsible for action and omission,” said the president of the JxC interblock, Mario Negri, insisting on the need to correct the legal framework. Shortly after, criticism rained down on him. “Tell Negri that they also voted for the law,” the president of the Constitutional Affairs Commission, Hernán Pérez Araujo, responded ironically to Page 12. Indeed, the Vaccine Law was approved at the end of last year with the support of all political blocs and in the Chamber of Deputies it obtained 230 positive votes, 8 negative votes and 11 abstentions.

The crux of the matter with the law has to do with the article that includes the condition of “negligence” as an exception to the conditions of indemnity. Publicly, the ruling party stated that it would be open to the possibility of making changes in the law if this would imply “protecting the lives of Argentines”, but considered that “it is not necessary to do so yet”: “If we have any competitive advantage and the We are going to change, but if nothing changes, the situation seems to me that the law we have is sufficient, “said the president of the Health Commission, Pablo Yedlin. On the ground, however, the Frente de Todos is reactive to “make a special law for Pfizer.” “With this law we signed five contracts and we had no problem. The problem is in a laboratory then,” said one of the main figures of the ruling party in the Lower House. The legislators assure that the Executive did not request to make any changes and that, in any case, the decision to do so will be made by the president. Meanwhile, and taking into account that the Pfizer vaccine is enabled for children between 12 and 18 years old, the ruling party analyzes an intermediate position of working on a special pediatric vaccination law.

Finally, Nicolás Vaquer also confirmed that Pfizer had offered Argentina 13.2 million vaccines to be delivered as of December 2020. “One million doses before 2020, two million in the first quarter of 2021, 5 million in the second quarter, and the rest in the fourth quarter, “he described. Given the claims of some sectors of the opposition, Cecilia Moreau clarified that this agreement for 13 million was “a hypothetical and staggered delivery.” “You have to see the delays in other countries,” they warned from the ruling party, from where they released a Foreign Ministry report that gave an account of the shortages in the countries that had signed an agreement with Pfizer. According to it, in Brazil, for example, 200 million doses had been purchased but, as of May 14, it had only received 2.2 million.

The value of producing vaccines

The president of Laboratorio Richmond, Marcelo Figueiras, vindicated the importance of the national production of Sputnik V and announced that his plant could produce up to five million doses per month. “The countries that produce vaccines, vaccinate; those that do not, wait,” stressed the head of the laboratory that will be in charge of the local production of the Russian vaccine before the deputies. During his presentation, Figueiras explained that Richmond had signed an exclusive contract with the Gamaleya Institute and the Direct Investment Fund of Russia, and not with the Argentine State.

“Starting this week, we are going to start producing 500 thousand doses per week, with a capacity to manufacture five million doses per month once we reach the rhythm,” Figueiras assured in front of the deputies. “I want to highlight the support of the entire political and business arc to the project with a patriotic sense that overcomes political differences, which will surely be reflected in the participation of many private companies,” said Figueiras, who explained that the investment “will be made through a public, transparent and open trust. “