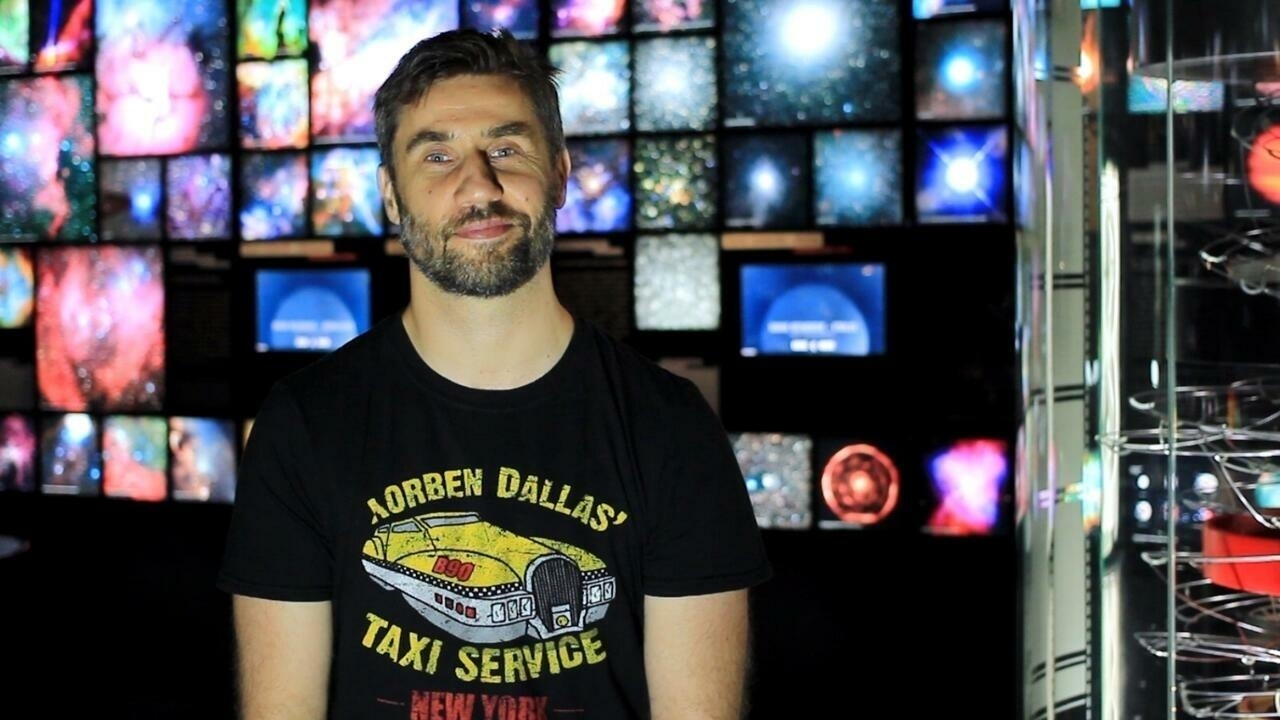 Better known under the nickname “astropierre” on Twitter, Pierre Henriquet lives, dreams and breathes scientific mediation. All his youth, he was attracted by her, before understanding that he had to make it his job. His goal ? Make complex scientific knowledge accessible, with a preference for the stars, despite an increasingly tense context on social networks. Portrait.

« Since I was little I have looked at the sky, my parents tell me that before I even knew how to speak I pointed to the Moon and asked them what it was. Pierre Henriquet, 45, has a natural good nature, a way of speaking, of staring which immediately puts the listener at ease and immerses the listener in the flow of his words as in a story. The exchange is easy despite the interposed screen. The scientist recounts his childhood, in the Alps, in Chambéry. ” It’s a small chance because in the Alps there are two three corners still well spared by light pollution » and suddenly, without transition, the memory of childhood gives way to the popularizer of science: « winter, contrary to what people think, is the period when there are the most beautiful skies to observe, because the atmospheric turbulence is much lower, the humidity freezes, the atmosphere is crystalline. »

Since his childhood surrounded by mountains and stars, Pierre Henriquet/Astropierre has been a scientist, mediator, doctoral student, lecturer, popularizer, chronicler mediator… He is now a little of the seven at the same time, at the crossroads between the scientific world and the general public.

Some pass the glance on what surrounds us without lingering there, others will ask themselves a question, and a minority finally will try to find an answer, sometimes in a compulsive way. Pierre Henriquet is one of them: “ This curiosity to know how a blade of grass grows, why a million-ton cloud floats in the air, why the sky is blue… How does a ballpoint pen work? I’m as fascinated by a ballpoint pen image through a scanning electron microscope as I am by the latest image of a black hole jetting matter deep into the universe.s. »

Tonight from 6:13 p.m., the International Space Station will pass over France.

Observable with the naked eye, it will begin by brushing past Jupiter in the West before rising in the sky & crossing it in a few minutes.https://t.co/5yo1P6iFVO pic.twitter.com/o8VxsjbfG9


This compulsive, vital need to understand drives him to share his discoveries with his friends and family, sometimes at the risk of going too far. ” Long before I knew I wanted to do science mediation, I already wanted to. I jumped at every opportunity, in my schooling, with parents, friends, to talk about science, to explain phenomena. I had to understand that something that fascinated me did not always fascinate others. he smiles. As a young student, he discovered an ad in a specialized magazine to be a scientific mediator. Neither one nor two, he applied without really believing it at the Astronomy Center of Saint-Michel-l’Observatoire, in the Alpes-de-Haute-Provence.

He spent four years there, before resuming his studies and obtaining a Master’s degree in nuclear physics applied to medicine. Due to a lack of funding for post-doctoral work, and a parallel diploma in his pocket in astrophysics, he returned to scientific mediation. In 2011, the Vaulx-en-Velin planetarium contacted him to complete its team. Without hesitation, the young scientist agrees: “ I was responding to a physical need, I needed to tell all this to people, the dam was full. I realized while doing it how much I had missed it all my life. »

In ten years at the planetarium of Vaulx-en-Velin, the scientific mediator learned a lot. Adapting to the people they meet, quickly determining what levels of knowledge they have and transforming the discourse into function… but the work is not limited to transmitting knowledge.

One day, when he turns on the lights at the end of a session illustrating the immensity of the Universe, an old lady comes to see him and asks him: ” Here, with all the instruments that you showed, everywhere you looked in the Universe, did we already see where paradise was? » Pierre Henriquet continues: « I reply, taken aback, “No… as far as we looked, we never saw where heaven was, why you ask me that?”, and there she answers me: “ because my husband passed away a week ago, and I wanted to know where he was and if he’s okay.” All of a sudden, the scientific mediator finds himself dealing with a new situation. After an emotional silence, he continues: No more talking about the cosmic microwave background: I have a lady who is suffering, and who needs reassurance. I made her talk about her husband. I told her that all the stars we saw were shining everywhere in the Universe, that it was the domain of light… she left with a smile thanking me. »

► To read also: Éric Saint-Sulpice, a diver between passion and blues of the depths

Or this other time, when you have to know how to explain the difference between belief and science. In intervention in a district, he makes discover through a telescope the face of the Moon. A person approaches, looks, amazed, but turns towards him with a sorry look. For her, it cannot be the Moon, since it is written in the Koran that the Moon was cut in two by the prophet, and that it has no scar. ” I explained the difference between a belief and a science, that it was not necessarily incompatible but that there was an intellectual approach that was not the same: it led to a super interesting discussion. You can’t give to people without getting a lot in return. smiles the scientist.

Without knowing it, in 2012, Pierre Henriquet began a new phase. He takes to Twitter, where he talks about everything he doesn’t have time to cover in his presentations at the planetarium. ” Twitter suited me well because it was going very fast, by following the right people you have access to a lot of information. I didn’t aim to be known by many people “, he is surprised. Ten years and 50,000 subscribers later, he has become one of the figures of popularization on social networks. In November 2021, he became self-employed and sold chronicles, conferences and interventions to live from his passion. A new experience that amuses him: I do mediation, on my own, a totally different way of working, you have to get contracts, write invoices, a new adventure begins! »

There are many like Astropierre, popularizing on Twitter, with a lot of threads, these series of tweets, in a row, to develop a specific subject on science. When asked about the links between these super-popularizers, he does not hesitate: ” We all know each other, and that’s what I really like, there’s a real benevolence between us, we appreciate all the content we share, and we all share it in a different way, each person has their own way to do. »

Digital bonds sometimes turn into real friendship: like a movie crossover between emblematic figures of superheroes, after having carried out their work in the area, certain popularizers meet, sometimes. ” It happens to us but we don’t have a secret base of scientific mediators! » Peter replies with a laugh, a little less for two years, but not long ago Tania [voir ci-dessus, NDLR] went to Lyon for a symposium… there are plenty of them, to whom we promised ourselves that we would see each other, but we didn’t find the time! »

Because it takes time and tenacity to be a scientific mediator on social networks. The health crisis is not helping matters. A situation from which the forty-something escapes a little, but not his colleagues: “ I know some personally, friends who popularize medical science, threatened with murder, “we are going to come to your house, since you want to poison us with your vaccines we are going to poison your family…” friends who received rape threats, terrible things, extraordinarily violent. »

There, Pierre hardens his tone and look. He becomes animated, speaks faster. Embraces the treatment of certain information by part of the media: “ On a set, it is dangerous to put at the same level Valérie Masson-Delmotte, who worked at the IPCC, a world reference, who takes the time to share his knowledge, and Jean-Louis Complotiste, convinced that global warming does not does not exist and that it serves China or the lobbies. There is no need to have its truth, it is necessary to look at the current consensus on our knowledge, not to confuse science and belief! »

I watched with family #DontLookUp during the holidays… and quickly heard “eh, mom, it’s the same as for climate change!”

I would like to share some thoughts, with regard to certain experiences at the science / society interface…


The populariser denounces an ambient relativism, according to which the slightest contrary opinion should always be presented, even if it is unfounded and a thousand miles from the scientific consensus, under the pretext of plurality of opinion. ” This is how we raised the “druid of Marseille” to the rank of muse when this imbecile was saying nonsense from the start. Those who denounced him were dragged through the mud “, he continues without counting the blows.

Despite everything, Pierre Henriquet does not intend to stop there. Spreading science is far too important: “ We increasingly live in a technological and technical society. If we want to ask the population for their opinion, if we want to hold referendums, we must have a population that is able to reflect on the issues on which we are asking them to decide., from nuclear power to GMOs and public health policies. » Read popular science articles, watch videos of reliable personalities, get informed, and doubt everything that is sold as a revelation, by checking the sources… and follow @Astropierre, one of the many scientists who take the time to open up the wonder of the worlds to all.

Pierre Henriquet chose a few “tweets” to follow absolutely … while stating that he would have liked to quote more:

follow live the quarter-final between Senegal and Equatorial Guinea