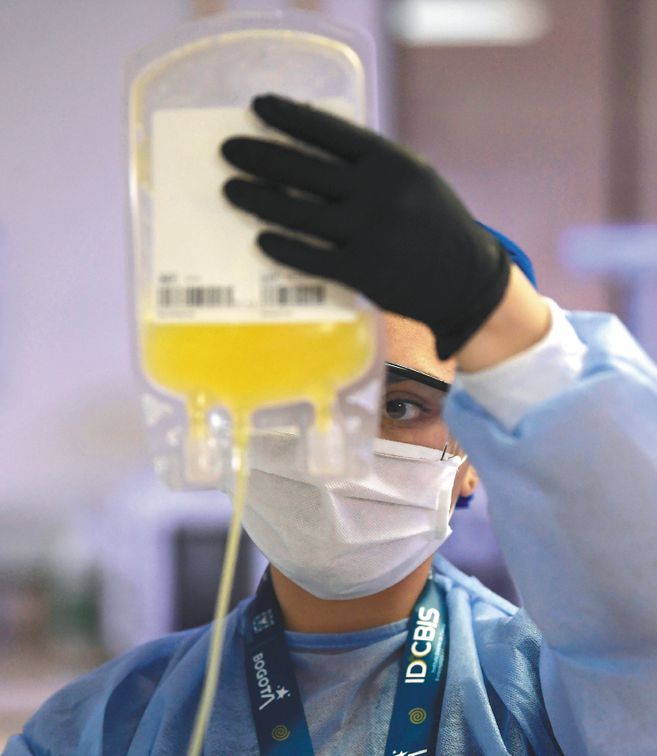 This old therapy has always been on the radar of medicine to face new epidemics. Today there are 135 clinical trials underway to see if it can be effective against the new coronavirus. One of them is Colombian. Why has it generated so much expectation?

More than eight months have passed since the emergence of SARS-CoV-2. The twenty million infected and 700,000 dead are a pressure cooker for science, which faces a race against the clock. Shortly after the virus was identified, studies began to find a treatment or vaccine. Since then, every week the world receives hundreds of news about their progress, although none have yet been proven effective. This time, after a group of researchers presented preliminary results of their study, the headlines in Colombia pointed to an old therapy used on other occasions to control unknown epidemics: plasma, a liquid present in the blood.

Convalescent plasma therapy, as it is known in the medical world, was discovered by the German Emil Adolf von Behring in a technique he called passive immunity, with which he won the Nobel Prize in Medicine in 1901. The treatment was used with some success during the influenza pandemic of 1918. History indicates that transfusions were carried out in about 1,700 people, reducing mortality in 21% of treated patients. The plasma served as a first control measure for a pandemic that left a toll of fifty million deaths.

For the scientists who started doing it, the procedure could work: the antibodies contained in the plasma generated a neutralizing activity and accelerated the virological control of a person in the event of a possible infection. It was a kind of “antiviral therapy.” Thereafter, convalescent plasma became one of the first tools used by medicine to control emerging epidemics.

“When faced with an emerging pathogen, we usually do not have specific, proven and effective therapies; therefore what we have at hand is the use of plasma from recovered patients. We have recognized the usefulness of plasma since the end of the 19th century, with work on diphtheria, findings that recognized Emil Von Behring with the first Nobel Prize in the history of medicine ”, points out the infectologist Edwin Silva.

The convalescent plasma was even used to treat diseases such as polio, measles, mumps, and Ebola. But one of the main reasons for resuming its study in this pandemic was its use against other coronaviruses: SARS, which appeared in China in 2002, and MERS in the Middle East (2012).

“The plasma treatment was used with SARS-CoV-1 and MERS and they did show benefits regarding mortality, but they are anecdotal cases, because at that time such rigorous studies were not carried out and they were controlled epidemic outbreaks”, explains Bernardo Camacho, director of the District Institute of Sciences, Biotechnology and Innovation in Health (Idcbis), who directs a study with convalescent plasma for COVID-19 patients in the country.

See Also:  The NBA confirms that it negotiates with Disney

If the evidence is not so clear, why then retest to demonstrate its efficacy? The answer, for the group of Colombian researchers who lead the PC-COVID-19 convalescent plasma project is clear: “We cannot compare the results of the past because those studies were not done with the rigor we have today. Neither a hundred years ago, nor in 2002 or 2012 did they have the technology that today allows us to carry out high-precision molecular studies, viral loads, chemical markers, etc. That is precisely the purpose of our study: to demonstrate with strong scientific evidence that plasma is an effective substance, ”said Bernardo Camacho.

Colombia’s experience with convalescent plasma treatment is still very premature. Just a few days ago, the group leading the PC-COVID-19 study released data from a pilot test with just ten patients. The preliminary results were favorable: there was a recovery in 80% of the cases and the chosen donors were selected under a rigorous process in which they had to meet certain characteristics: having tested positive for coronavirus, recovering from a severe illness without going through an intensive care unit, and having been symptom-free for fourteen days.

With these first data in hand, the group decided to launch a clinical trial, the only way that clearly clarifies the doubts about its effectiveness in combating COVID-19. “We are going to start a randomized clinical trial with ninety people. 45 of them will be administered plasma and the other 45 will continue with the standard treatment of the three clinics that are part of the study: the Méderi, the Clínica del Occidente and the CES University clinic in Medellín ”, adds Camacho.

The project has a cost of $ 1.2 billion and those who run it expect to deliver the first results by the end of September. They ensure that their study is different from the rest of the world. “Identifying super-donors, as we call them due to their special characteristics, is a singularity of the Colombia study. We were able to extract a hyperimmune plasma with an antiviral and anti-inflammatory effect. No other study in the world uses a plasma with these characteristics ”, says Camacho.

Although they know that the road ahead is still long, they believe that this is a great opportunity for science. “The virus is giving us the opportunity to do very important research and this is a huge learning curve. This possibility of using the plasma of those who have had COVID-19 could even become an important investigation for other viruses that exist in Colombia ”.

In addition to the Colombian group, according to the Clinical Trials medical database, there are at least 135 clinical trials in the world that are studying convalescent plasma as a possible treatment against COVID-19. One of the few that has published results is the one that took place in Wuhan (China), where the pandemic began. As reported in the medical journal JAMA, that group compared 103 coronavirus-infected patients, between the ages of sixty and seventy. 51% of those who received plasma improved faster than those who used the standard treatment. However, the researchers found no significant difference in patient mortality. The authors acknowledged that their results were not conclusive, as they had to finish the tests earlier than expected due to the lack of patients.

“The first randomized clinical trial of convalescent plasma in COVID-19 did not show a statistically significant benefit in clinical improvement at 28 days or mortality among all randomized patients, but it provides an important signal of a possible benefit in the subgroup. of seriously ill patients and suggests that the high concentration of antibodies against SARS-CoV-2 may have antiviral effects ”, were the conclusions of the journal JAMA in a editorial published on June 3.

Another of the recognized clinical trials is the one being carried out by the Mayo Clinic in the United States. In total, 20,000 people received convalescent plasma. A first control report, published on July 19, revealed a decrease in mortality, but the study authors themselves cautioned that these are not yet significant results. However, although the Mayo Clinic tests were conducted with a representative number of people, the failure to compare the course of people who used plasma with other patients who used a conventional treatment leaves many questions.

“This publication is a large registry from the US Food and Drug Administration analyzed by researchers at the Mayo Clinic with nearly 20,000 patients using convalescent serum. The problem is that no matter how large it is, it is not a controlled clinical trial and the information it provides cannot give us news of the efficacy of convalescent plasma ”, explained infectologist Edwin Silva.

Even so, these first findings were well received by the North American press and even President Donald Trump himself, with the eagerness and lack of scientific rigor that characterizes him, encouraged other coronavirus patients to donate their plasma: “You, the who have overcome the virus, they have something very special: they had something that eliminated COVID-19, so we want to be able to use it, “he said cheekily. Other Hollywood celebrities such as country singer Dolly Parton or actor Dwayne Johnson, The Rock, also publicly praised the supposed “beautiful ingredient,” as Trump cataloged it.

Another more recent study, published the first week of August in The American Journal of Pathology, was conducted at Houston Methodist Hospital and preliminary results from 300 patients treated with plasma therapy showed favorable results in the first 72 hours transfusion has been started in people with severe COVID-19. Researchers suggest that the treatment is safe and effective. This research represents one of the first peer-reviewed publications in the United States.

For some, the lack of scientific evidence is not the only limitation regarding the application of convalescent plasma. The time that should be used in the treatment, its cost and its effectiveness are some questions that have not yet been answered. “As for antiviral therapy, one would ideally like to have a drug, not the need to administer plasma, which not only has a costly protocol for its collection and administration, but can also trigger severe allergic reactions or the lung injury itself related to transfusion, ”added the infectologist Silva.

The truth is that, like other treatments, convalescent plasma is still in the testing phase and its effectiveness will be proven over the months. For now, the pressure that has been put on this therapy has prompted immunologists like Arturo Casadevall, from Johns Hopkins University, who is also conducting a plasma study, to assure that “it is the only option currently available to face the pandemic in the US while a vaccine or drug is being developed. “

The PC-COVID-19 researchers still have to answer several questions in the coming months: the improvement of patients in a shorter time, the recovery from lung failure or the reduction of the inflammatory processes that the virus generates in the body. “We still have to solve several unknowns, but if everything goes well, we will not only be able to have a protocol for obtaining plasma approved by Invima and the Ministry of Health, but we will also have a therapeutic protocol for COVID-19 patients”, concluded Rubén Manrique, epidemiologist at the University of CES and participant in the study.

Questions are still on the table and for doctors facing the daily increase in infections in the country, it is clear that we still have to wait. “The most important thing to define in terms of plasma,” Silva reiterates, “is whether it can reduce mortality in COVID-19 and so far it has not been proven. Likewise, it will be important to determine in what type of patients and when it should be used. We are pending to verify this news ”.