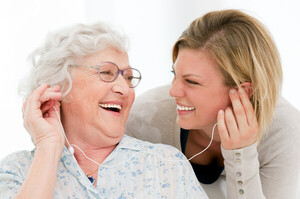 Dementia lacks the ability to communicate with others in addition to memory and reasoning skills. Social participation and communication are also a problem, but communication with the closest caregiver also becomes difficult.

However, an American study proposing a solution was recently published in Alzheimer’s Disease & Associated Disorders.

It is said that certain forms of music therapy can alleviate the difficulties experienced by dementia patients and their caregivers.

Music therapy here refers to the use of music to improve mood and improve life.

In this study, subjects with dementia and their caregivers were given a 45-minute live concert.

The results showed better nonverbal communication compared to those who did not receive music therapy. During the concert, dementia patients showed eye contact, interest, concentration, and calmness with their guardians.

In addition, caregivers also answered the questionnaire that the stress of the dementia symptoms of the person they loved was reduced and that music was helpful in improving the relationship between the two.

Since the study spanned 12 weeks, it is difficult to see it as a proof of long-term effectiveness. However, it is meaningful in proving that music itself helps communication between dementia patients and their caregivers and has the effect of lowering the stress level of caregivers.

In addition to the above study, experts generally agree on how important music is for dementia patients.

American music therapist Scott Horowitz emphasized the effect of music therapy on the basis that human memory is closely related to sensory experience. People with dementia or other cognitive impairments often have impaired memory elements, which can be triggered by listening to music with memories that are meaningful to them.

Another music therapist, Dr. Bettany Cooke, said the effect was particularly strong with the music she enjoyed as a child (7-20 years old). In fact, he said he saw cases of dementia patients who could not recognize their spouses of 65 years during the course of treatment, and they recognized their spouses when they listened to the wedding music.

drooping Bezrukov spoke out after the funeral of a loved one