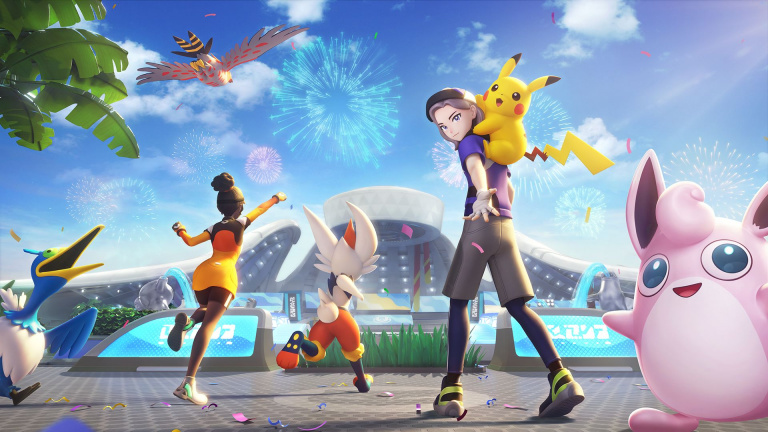 Announced a little over a year ago during a dedicated event, Pokémon Unite was long overdue before arriving in our regions. After multiple beta phases around the world, Tencent has finally decided to publish its Pokémon MOBA on Nintendo Switch, pending the mobile release set for September. Available for free and not requiring Nintendo Switch Online, Pokémon Unite is likely to be full, but what’s really under the hood?

For all intents and purposes, let’s briefly review what a MOBA is. In this genre opposing two teams, of five in this specific case, the players compete on a symmetrical map housing different objectives. They must defend their base, but also appropriate neutral objectives which will give them a clear advantage. By defeating opponents and AI-controlled monsters, avatars gain experience and unlock increasingly powerful skills. Pokémon Unite respects these codes to the letter, but lightens the formula to make it all public.

The most accessible MOBA on the market

Players’ Pokémon must beat wild Pokémon or opponents to earn points. They must then go “dunker” in the opposing base to validate these points. Be careful, because the more wild Pokémon the player has defeated, the more time this manipulation will take. So not to do in the presence of enemies. Once 100 points have been reached, the goal is destroyed and the team can progress to the next goal and so on to the opponent’s base. It is essential to bring down the opposing goals, because in these areas, enemy Pokémon gradually recover their HP. As in all games of the genre, cooperation is very important and it will be necessary to act in concert to achieve victory. For that, players can count on a prompt message system that takes care of the essentials. It will be necessary to act quickly, because the parts last only ten minutes maximum. The tactic begins with the selection of Pokémon, it is essential to choose your creature well to compose a complete and balanced team. Tank, attacker, support… Very classic for those who have already touched a MOBA. By knowing the license and the Pokémon, it is easy to identify the role of creatures and the threat an opponent poses. Once in the game, it will be necessary to coordinate to attack the opposing base at the right time and defeat the legendary Pokémon as a group. These weaken the opposing goals and allow to score instantly, which is particularly decisive at the end of the game. Indeed, the points are doubled during the last two minutes. This makes it possible to return a match in two stages, three movements. Finally, we quickly get around the concept of the game as it is wise in its re-adaptation of the MOBA codes. Pokémon Unite still benefits from specificities straight from the universe of the cult license of Nintendo.

Rather than simply improving their spells as the game progresses, each Pokémon forgets its basic ability and replaces it with another. In total each pocket monster has 5 different attacks, but only has access to 3 per game, because it must make a choice. For example, Nigosier forgets Siphon which he replaces with Surf or Dive depending on the player’s choice. At 9th level, each unlocks their ultimate attack which deals heavy damage and can easily turn over a fight if used properly. Interestingly, Pokémon evolve as the game progresses! As long as they do so in the original game. Selecting Charizard will start the game as Charmander. At first, it will therefore be necessary to evolve into Reptincel before accessing the final evolution. Each Pokémon can be equipped with different items and can hold a potion. The latter recharges every 30 seconds and can have different uses. At first, players have access to the Healing Potion, but then they can unlock brews that increase their damage or speed, for example. It is surprising, however, and perhaps regrettable, that Unite does not use the series’ traditional Weakness system. A Fire Pokémon will have all its chances against a Water Pokémon. That’s understandable, as this additional mechanic would have made the already precarious balance of the experience even more unstable. And if we understand the reason, it is still a central point of the Pokémon experience that is not used in this MOBA. A mechanism of this type could have led to sessions of “Picks and Bans” and very interesting compositions.

Apart from this grievance, there’s no denying that Unite is fun to play. Easy to learn while docked or on a laptop and very accessible, this competitive game has a very pleasant, good-natured atmosphere. The controls are well thought out, the hitboxes are generous, and there are only three spells to use. However, do not be fooled by its apparent innocence, as it is entirely possible to create real individual feats. Over our various sessions, it was not uncommon to see a player turn a fight into a well thought out action. If it seems clear that it does not have an infinite margin of progress like a LoL or a DOTA, Pokémon Unite still offers real sensations and can motivate players to jump into the ranked queue. In short, Tencent’s game finds a very nice compromise between accessibility and depth of play.

It is good to remember that this MOBA is free-to-play. You will therefore not have to go to the cash register to play. If you can buy Pokémon with real money, we do not recommend it, because in a few matches you will already have enough to unlock the Pokémon of your choice without taking out the blue card. In addition, as in all games of the genre, a free monster rotation is available to try. Sadly, we quickly go around the available content, because only 20 Pokémon are playable at the moment. It’s light. And if five more should join the roster in the near future, that is not much for a game of its kind. To deceive the repetitiveness, players can indulge in the “Quick Battle” mode which, as its name suggests, offers more frenetic clashes. This secondary mode is still less interesting in terms of tactics and relies on incessant fighting to entertain the player.

The title obviously has a battle pass. The latter costs about 10 euros, is rather generous in content and can be unlocked quickly. You will be rewarded with coins allowing the purchase of Pokémon, cosmetic items, upgrade coins, etc. All gameplay items are unlockable without paying while some costumes can only be purchased with real money. Whether you take out the wallet or not, you will have access to different clothes to personalize your trainer. Without being particularly extensive, this personalization seduced us, because the artistic direction is very clean and the clothes offered are modern. Displaying a non-obnoxious streetwear aesthetic, player trainers can don very pretty outfits, which in our medium is rare enough to be noted.

Without being a graphic stallion, Pokémon Unite is rather pleasing to the eye and has a very important graphic option. You can either lock the Framerate at 30 frames per second or choose a higher frame rate. Unfortunately, the “High Framerate” mode lacks a bit of stability and causes occasional freezes. Nothing dramatic, but in the heat of the moment it can cost your life. We did not encounter this issue in 30 FPS mode. We would still have appreciated that the title holds its 60 frames per second in all circumstances, especially in view of its own technique, of course, but not necessarily impressive. Hopefully the mobile version will benefit from better optimization.
Finally, we regret the absence of French translation. If the required level is accessible and once entered the bath the displayed language does not really matter any more, that remains harmful.

By leveraging the power of the franchise and accessible gameplay, Pokémon Unite stands out as a successful MOBA. Simple without being simplistic, it can be a perfect entry point for newbies. However, it’s pretty clear that Tencent’s title will need to inflate its content in the coming months to keep players engaged. As it stands, the low number of Pokémon limits the situations encountered and may make the games boring. Still, Pokémon Unite already has a solid base and is only waiting for content to evolve into a staple of the genre with the general public.

Read readers’ reviewsGive your opinion on the game!