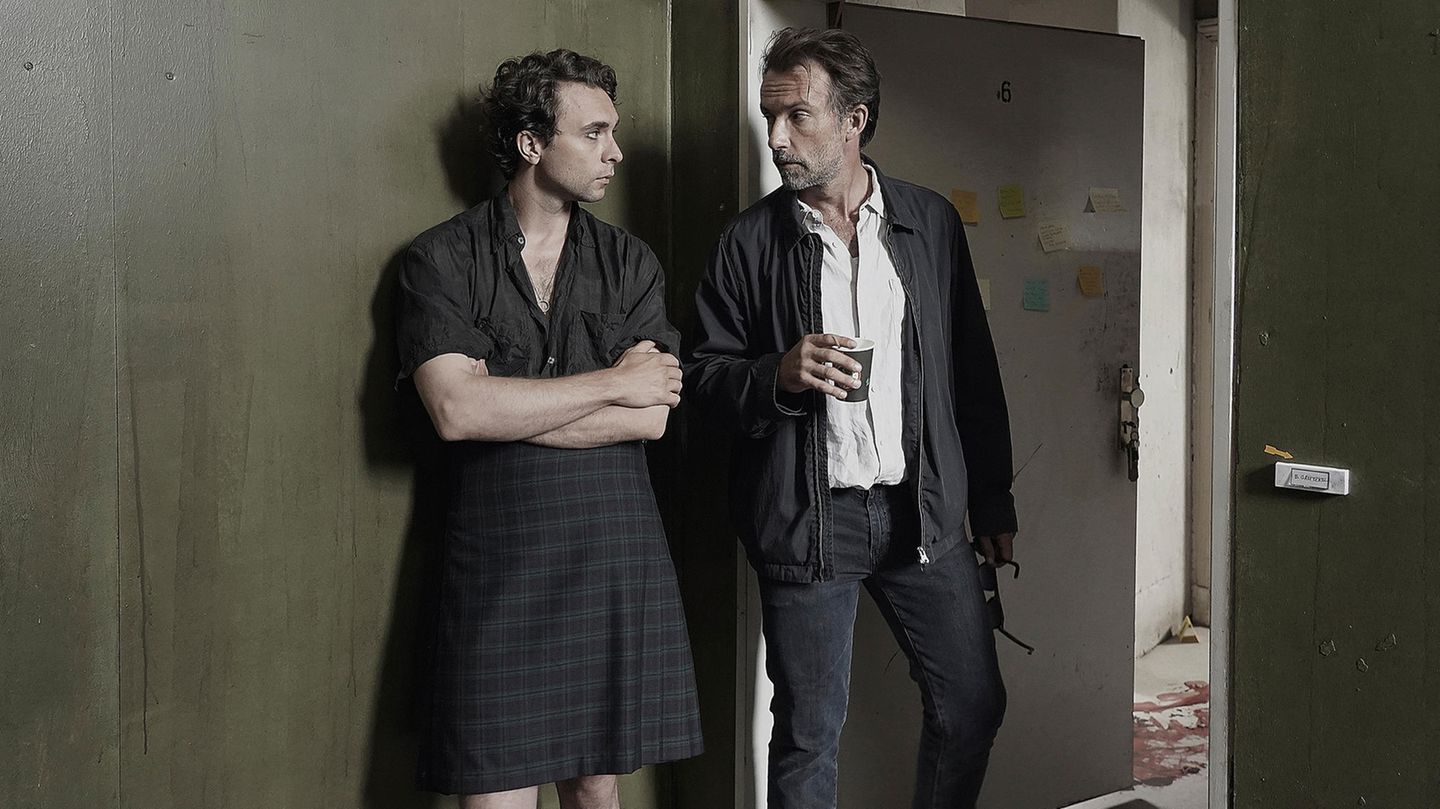 “Police call 110” from Frankfurt (Oder)
A new sheriff is in town: Vincent Ross’ debut with kilt and kajal

This detective is refreshingly different: Vincent Ross wears a skirt, makes up and doesn’t give a damn about gender roles. In his first “police call” operation, the young man has to deal with a bloody inheritance dispute.

Commissioner candidate Vincent Ross (André Kaczmarczyk) had certainly imagined starting his new job differently: before his first day at work, he is involved in a murder investigation. A young man is murdered above his new apartment in Slubice. Inspector Adam Raczek (Lucas Gregorowicz) is amazed when the kajal-painted resident in the checkered skirt turns out to be his new colleague.

In their first murder case together, there are many indications of an inheritance dispute: Hilde Grutzke, the grandmother of the dead man, keeps an enormous sum of cash in bags in her house. Her son Ulf lives on the street, her granddaughter Emma, ​​sister of the murder victim, has taken refuge in a dream world. The two investigators suspect the perpetrator in the family.

Why is this “police call 110” worthwhile?

Some viewers will surely fume and shout “Gender-Gaga” indignantly. But in 2022, an investigator who breaks down rigid gender roles and plays with clichés should be a matter of course for a long time. The fact that it had to take so long does not reflect well on public television, which is still all too often driven by trying to please everyone and offend no one. All the greater the merit of the RBB to finally face the present.

The actual case is not particularly sophisticated: the investigators keep going to the same places and interviewing the same people again and again. The human and social misery that becomes visible in the process is somewhat tiring in the long run.

They couldn’t be more different: Adam Raczek is a macho of the old school who doesn’t want to admit his feelings under his hard shell and prefers to suppress them. Vincent Ross immediately recognizes the deficits in his older colleague. It’s not love at first sight – but the two gentlemen pull themselves together surprisingly quickly. A wonderful friendship could develop there.

Turn on or off?

Even if the case is not completely convincing: An exciting investigator is celebrating his debut here – you shouldn’t miss it.

“There was a break”, how do suspended caregivers live after 4 months of suspension?