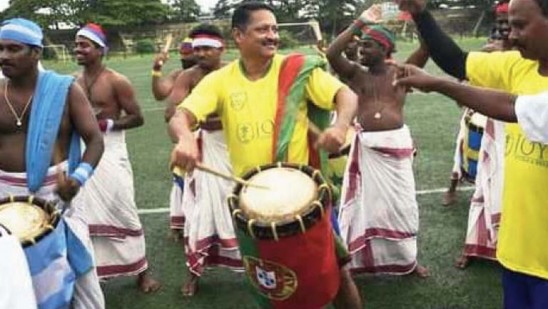 Thrissur
CV Pappachan retires from police service Pappachan is retiring as the Commandant of the Kerala Police Academy, having created amazement with football all over the country, especially for Kerala and the Kerala Police. Pappachan says that he will be active in art and sports training for a long time to come.

Pappachan, who amazed the field with his ball handling and dribbling, is bidding farewell to the police force with his own signature in Indian football. He will be active in the world of football, starting with the Academy for Goalkeepers, and aiming for further training in his favorite pastimes, the saxophone and the saxophone.

Pappachan started playing football from the LP school ground in his hometown of Parapur wearing a jersey for Calicut University. He then became a player for Premier Tires. Nagji played football. He joined the police force in 1985 as an ASI. Until 1998, he played on the police football team. Later he put on a uniform and joined the army. Despite great offers from leading clubs in the country, the Kerala Police did not give up and go nowhere.

In 1990, Pappachan scored the first goal of the season for the Kerala Police to overthrow the mighty Sal Gokart of Indian football. Police won the title by two goals to one. He played in the Santosh Trophy several times and was a member of the winning Kerala team. VP Sathyan, IM Vijayan, U Sharafali, Tobias, KT Chacko and Kurikesh Mathew were his teammates. He wore the jersey for India several times and captained the team against Sri Lanka. Pappachan’s goal against Hungary in the Nehru Trophy was one of the highlights. In 2020, Pappachan was awarded the President’s Police Medal.