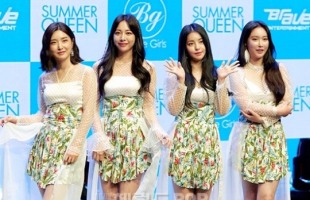 The Brave Girls side explained and apologized for everything from the alleged abuse of the fan manager to the controversy over the goods.

On the 12th, the quality of Brave Girls’ first goods became controversial. The goods with the members’ faces were of low quality, and were priced at 55,000 won for 4 sets of soju glasses, 7,000 won for glasses cleaner, and 18,000 won for acrylic stands.

In addition, suspicions of abuse by the fan manager were raised. Brave Girls fans announced that they would prepare 50 million won worth of sound equipment as support for the members and deliver them on the spot on the condition that they do not face the members. However, the fan manager refused and claimed that he opened the boxes one by one on the street and inspected the contents of the support. Fans also added that they were offended by the attitude of the fan manager. The unilateral deletion of fancafe posts has also sparked controversy.

As the controversy grew, Brave Entertainment, the agency of Brave Girls, said on the official website on the 23rd, “First, we bow our heads and apologize to all the fans for the many unfortunate incidents that have occurred recently. We would like to explain the promise to prevent recurrence along with compensation for

Regarding the controversy over the quality of the goods, the management company promised, “We promise to collect and refund the entire amount of goods that have been previously sold for refund or return, and we will contact all those who have purchased them individually in sequence.”

Regarding the fan manager abuse controversy and the unilateral deletion of posts on the fan cafe, he said, “Currently, the fan manager has submitted a resignation letter, and the head office has repaired it. The newly designated fan manager promises to communicate from the fans’ point of view through thorough personality verification.”

The agency quickly clarified and apologized to the noise surrounding the Brave Girls, which had reached its peak, and promised to change. Netizens’ attention is focused on the change.