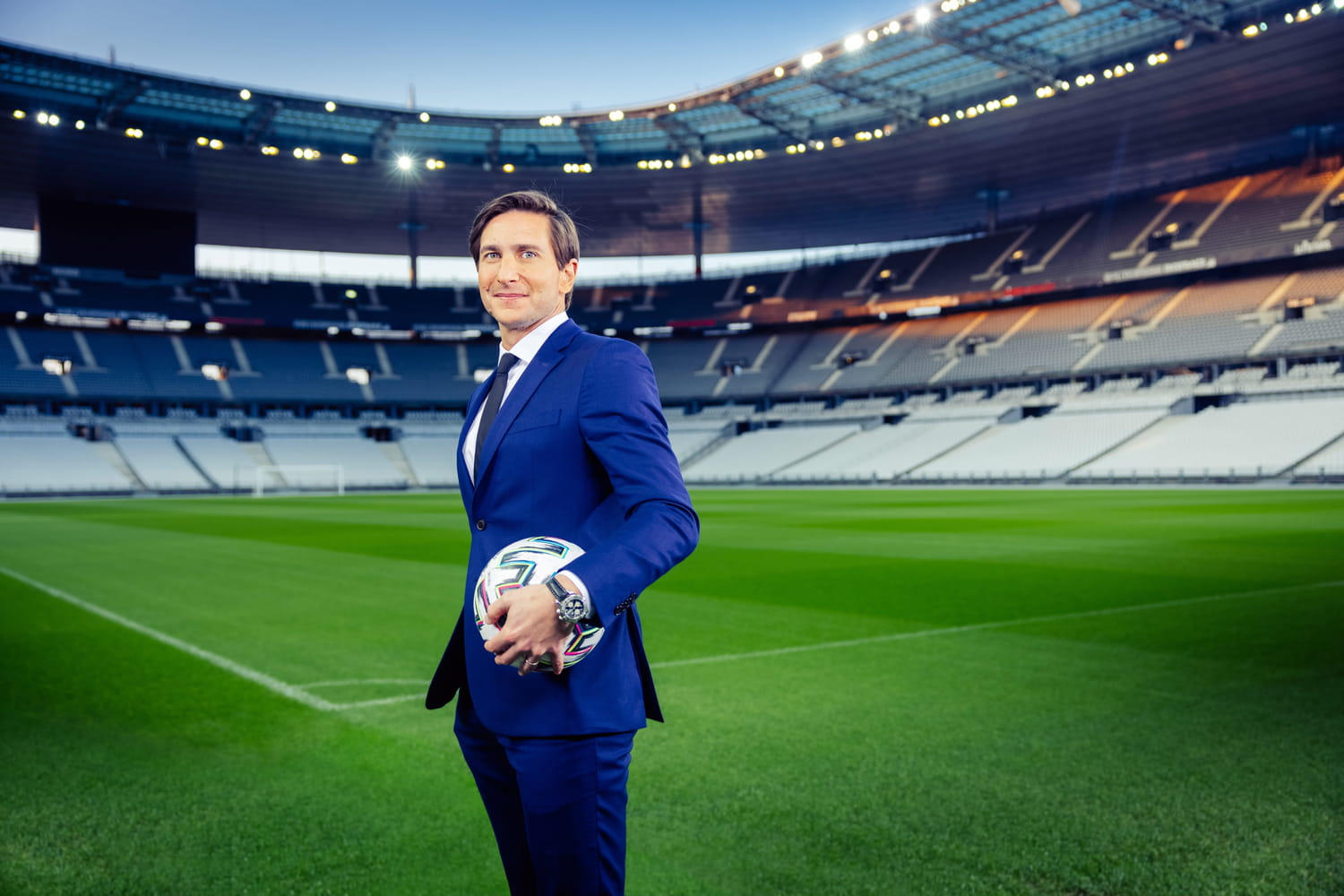 BIOGRAPHY OF XAVIER DOMERGUE. Xavier Domergue is a French sports journalist, son of footballer Jean-François Domergue. He comments on the Euro on M6 during the 2021 competition.

[Mis à jour le 22 juin 2021 à 20h00] M6 viewers can discover Xavier Domergue’s comments on the occasion of Euro 2021. The sports journalist, whose voice resembles that of Grégoire Margotton, joined the sixth channel since June 2020, after working in the editorial staff by beIN Sports. With Robert Pirès, he now comments on Euro 2021 during the matches broadcast on the Six. You can find the full schedule of the Euro 2021 TV program on the link.

Before even embarking on a career as a sports journalist, Xavier Domergue, 39, was very familiar with football fields. His father is none other than the French international player Jean-François Domergue, known in particular for having scored a decisive double in the semi-final of Euro 1984, which led a few days later to a victory for France against Spain. On the private side, Xavier Domergue is the father of three children.

Xavier Domergue is a French journalist who worked on beIN Sports and M6. During his career, he specialized in sports commentary, more particularly football. During Euro 2021, he comments on the matches broadcast on the sixth channel. He is the son of French international footballer Jean-François Domergue.

Born in 1982 in Bordeaux, Xavier Domergue is the son of a well-known footballer. His father, Jean-François Domergue, was trained at the Girondins de Bordeaux before playing for the French team, notably at Euro 1984. During his career, the one who held the position of defender played 501 matches, scoring in total 62 goals in his career. After fifteen years on the field, Jean-François Domergue ended his football career in 1989. He then coached the Le Havre and Montpellier HSC teams since the 2000s until 2007. He was director of the center. training at the Montpellier club from 2009 to 2013, before joining UEFA in 2014 as project manager for the development of football schools in Eastern Europe.

Xavier Domergue studied at the Bordeaux business school, before turning to the journalist. He took part in several internships in the editorial staff of France Football magazine then in Eurosport. He began his career as a freelance writer for Orange, Ma Chaîne Sport and Canal +. In 2012, he was asked to join the editorial staff of beIN Sports when the channel package was launched to comment on the various football events until 2020. Since June 2020, Xavier Domergue joined the M6 ​​channel, and comments in particular on the matches of Euro 2021. He also officiates at the presentation of the program “Who wants to be my associate” replacing Julien Courbet.

Xavier Domergue quickly developed a passion for football. According to Le Parisien, he began to play at the university club of the Bordeaux stadium, in defensive midfield. He was offered a contract as an aspirant to join the Girondins de Bordeaux, but he refused. His father, Jean-François Domergue, specifies in the columns of the Parisian that his son “saw football more as a leisure sport”. After having embarked on journalism, Xavier Domergue specializes in sports journalism and more particularly football. From 2012, he is commentator on beIN Sports and works on Ligue 1, Euro in 2012 then in 2016 and also covers the 2014 World Cup and the 2018 World Cup. In June 2020, Xavier Domergue joined the M6 ​​channel. He then commented on the matches of the French men’s and women’s team. During Euro 2021, Xavier Domergue works jointly with Robert Pirès to comment on the matches of the France team.

Xavier Domergue is used to thinking about it: the journalist from M6 has a vocal timbre very similar to that of Grégoire Margotton. In an interview with Le Parisien, Xavier Domergue admits that “this does not [l’]not annoy “, but that he” would like us to stop talking about it. “” I’m not trying to copy, it’s not my idea. I prefer to have fun with it. Grégoire had some nice messages. We both sound pretty serious. Grégoire was a source of inspiration like Thierry Gilardi and others. It’s okay to be inspired by the best. “