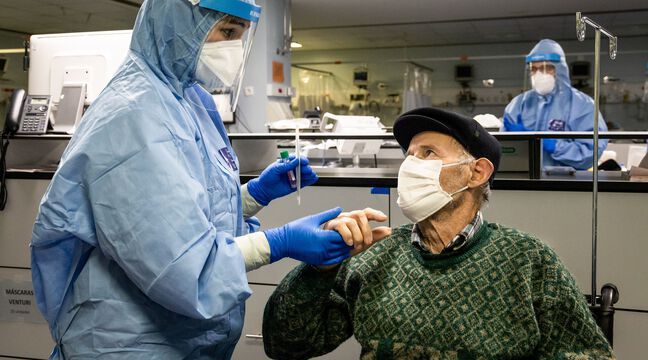 The Portugal under pressure.
The Covid-19 epidemic Thursday broke new records of deaths and contagions. Lisbon has decided to ban non-essential travel abroad while Portuguese hospitals are under “gigantic” pressure. The country currently the hardest hit in the world, in proportion to its population of 10 million inhabitants, recorded Thursday 303 deaths and 16,432 additional cases in 24 hours, according to the daily report of the General direction of health.

The total toll since the start of the pandemic thus stands at 11,608 dead, including more than 3,000 in the last two weeks, while the country has been subjected since January 15 to a second general containment.

“An exponential growth of new cases”

“Clearly things are going very badly”, admitted Prime Minister Antonio Costa, during an interview granted Wednesday evening on national television. “We have observed an exponential growth in new cases, and this is leading to new hospitalizations which in turn cause gigantic pressure on the National Health Service”, he added, adding that “this tension will surely last for several weeks ”.

The number of people hospitalized, however, fell Thursday, to 6,565 patients (including 782 in intensive care), for the first time since the start of the year. In this context, the state of health emergency in force since early November will for the first time be accompanied by a ban on non-essential travel.

Prohibitions to leave the territory from this weekend

“Except in exceptional cases, during the next fortnight, the exits of national citizens by air, land or sea, will be limited”, announced the Minister of the Interior, Eduardo Cabrita, during a speech in Parliament. This new restriction measure must come into force at midnight on the night of Saturday to Sunday, as well as the reestablishment of controls at the country’s land borders.

“In the same way that we had limited flights from the United Kingdom and suspended links with Brazil, we will contribute to the European desire to limit flights between risk areas throughout the European Union”, explained Eduardo Cabrita .

Suspension of air links with Brazil and the United Kingdom

The European Commission, anxious to avoid border closures within the EU, recommended Monday that member states put in place new travel restrictions for the areas most affected by the virus.

Portugal had already suspended its air links with the United Kingdom last week. Lisbon then announced Wednesday the suspension of all flights with Brazil, from Friday.

According to the Socialist Prime Minister, the epidemic has been racing since the start of the year due to the arrival of the new variant detected in England, combined with the reduction in health measures decided during the weekend of Christmas. “If we had learned in time of the existence of the English variant, we would surely have taken different measures for the Christmas period”, explained Antonio Costa.

He also admitted to having made “mistakes” in the way of communicating with the Portuguese. “People did not understand that we were really in confinement with the closure of schools”, decided a week later, he regretted.

The government decided on Thursday that schools will remain closed, switching from February 8 to distance education. In Portuguese hospitals, the situation seemed increasingly critical. Between Tuesday and Wednesday, a hospital in the western suburbs of Lisbon had to urgently transfer more than a hundred patients due to a problem in its oxygen distribution network.