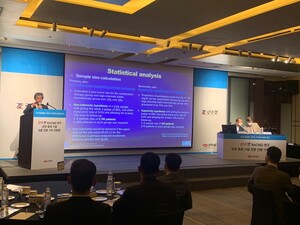 [팜뉴스=김태일 기자]A new paradigm for treatment is expected to be suggested as a result of the study that the ‘enhanced statin + ezetimibe’ combination is more helpful in the treatment of dyslipidemia than a single high-dose statin.

In the treatment of dyslipidemia (hyperlipidemia), which is estimated to be afflicted by more than 10 million people in Korea, the combined administration of a moderate-intensity statin (rosuvastatin) and ezetimibe is more useful in treating patients than the high-dose statin single drug that has been mainly used in the past. The research results were derived and listed in ‘The Lancet’, the world’s most prestigious medical journal.

In this study, which was registered in the Lancet, ‘Rosuzet’, a combination drug for dyslipidemia treatment of Hanmi Pharm, was used as the central drug.

Rosuzet, which has achieved annual prescription sales of over 100 billion units, is expected to stand at the center of the study as a catalyst for shifting to a new paradigm of dyslipidemia treatment, which was centered on a single high-dose statin drug.

“Rosuzet is a combination drug that combines rosuvastatin and ezetimibe, which Hanmi Pharm introduced for the first time in Korea based on its excellent formulation technology,” said Woo Jong-su, CEO of Hanmi Pharm. We are now able to provide an excellent treatment.”

At a press conference held at the Westin Chosun Hotel in Seoul on the 8th, Professor Kim Byung-geuk of the Department of Cardiology at Severance Hospital, who led this study, named RACING, said, “A comparison between the reduced dose statin and ezetimibe combination therapy and the existing high-dose statin monotherapy was 1 “There has been no long-term follow-up study for more than a year,” he said. “Through this large-scale investigator-led clinical trial, it is meaningful in that the combination therapy of statin + ezetimibe, represented by Rosuzet, can be presented as a useful treatment method compared to high-dose statin alone. is large,” he said.

The RACING study is a large-scale, researcher-led clinical trial conducted for 5 years targeting 3780 patients with atherosclerotic cardiovascular disease (hereinafter referred to as ASCVD) at 26 institutions in Korea. Internal medicine professors Kim Byung-geuk and Hong Seong-jin were listed as corresponding authors, and Hong Myung-ki was listed as the corresponding author.

According to the study results, the primary endpoint, cardiovascular death, major cardiovascular event, or nonfatal stroke at 2 years after administration, was confirmed to have an effect comparable to that of monotherapy in combination therapy.

The rate of reaching the LDL-C target level (less than 70 mg/dL), a secondary endpoint, was significantly different between the rosuvastatin and ezetimibe combination group, with an 18% difference between 73% in the combination therapy group and 55% in the monotherapy group at 1 year. appeared to be high.

Then, at 2 and 3 years, the combination therapy group showed 75% and 72%, respectively, and the monotherapy group observed 60% and 58%. This was found to be significantly superior.

The research team also confirmed the proportion of patients reaching ‘LDL-C < 55 mg/dL', which is lower than the target value. It was also confirmed that the LDL-C reduction effect was significantly greater than that of 25%, 29%, and 25% of

In particular, this study is significant in that it confirmed the efficacy and safety of the combined administration of rosevastatin and ezetimibe. The proportion of patients who stopped taking the study drug or reduced its dose due to adverse events or statin intolerance was observed in 88 patients (4.8%) in the combination therapy group and 150 patients (8.2%) in the monotherapy group.

Professor Kim Byeong-geuk said, “The results of this study are significant in that they suggested a new alternative to standard treatment to prevent secondary complications such as myocardial infarction or stroke recurrence in ASCVD patients. As the result that the ezetimibe combination effectively lowers LCD-C and has fewer side effects, it can be more helpful to patients, so it can be evaluated that a new paradigm has been proposed for the treatment of dyslipidemia.”

Because LCD-C, known as bad cholesterol, increases the incidence of heart disease due to the accumulation of lipids on the walls of blood vessels when the level is high. In order to prevent recurrence of the disease, the LDL-C target level for ASCVD patients is recommended to be less than 55 mg/dL, demanding a stricter standard.

In particular, it is important for cardiovascular disease patients to keep LDL-C low to prevent myocardial infarction and stroke. However, even when high-dose statins are administered, LDL-C is not controlled or it is difficult to maintain high-dose statins due to drug side effects.

“The high-dose statin therapy prescribed to lower LDL-C in ASCVD patients may have to be reduced or discontinued due to side effects such as muscle pain, liver damage, and diabetes,” said the corresponding author, Professor Yangsu Jang of Bundang Cha Hospital, who was in charge of the study. “However, a moderate-intensity combination of rosuvastine and ezetimibe, such as rosuzet, is expected to be an effective treatment for patients in need of LDL-C control based on excellent drug compliance,” he said.

Professor Hong Myung-ki of Cardiology Department at Severance Hospital also said, “It is true that many side effects may occur when a single high-dose statin is administered to a patient for a long period of time. We have high expectations that it will open a new horizon for rational and scientific dyslipidemia treatment,” he emphasized.

Meanwhile, Lancet achieved the first place in history this year, beating the New England Journal of Medicine (NEJM), which has been ranked first in the Impact Factor (IF), an international medical journal for the past 45 years, by listing many important studies related to COVID-19 in recent years. . Lancet’s IF evaluated by Clarivate, which publishes an annual journal citation report, was 202.731, significantly exceeding the NEJM of 176.079.

A beautiful anchor on Al-Jazeera, she forgot that she is live.. You will not believe what she did with her colleague and her reaction when she remembered that she was on the broadcast.!! (embarrassing video)

Coming from China .. the discovery of a new virus transmitted from animals to humans!