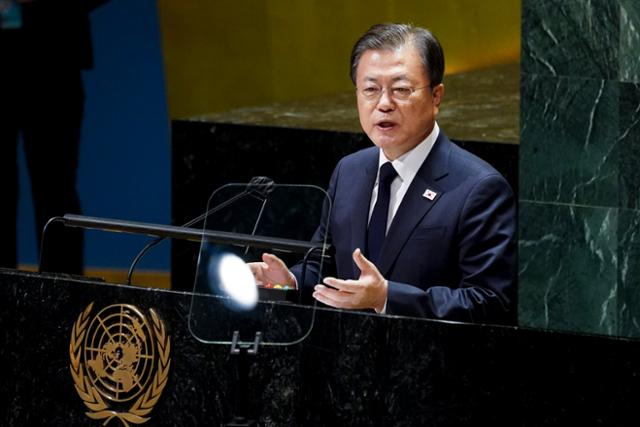 On the 21st (local time), President Moon Jae-in took out the ‘Declaration of End of War’ card again as a proposal for the denuclearization of the Korean Peninsula. This time, China was also brought in as the main body of the declaration. Considering the only seven months remaining in the term and the fact that North Korea-U.S. relations run in parallel even after the inauguration of the US administration, Joe Biden, it seems to be the last battle to reverse the stalemate in negotiations at once. However, it is difficult to expect a consistent response from North Korea through armed provocations, and the possibility of success is still unclear as the United States is adhering to North Korea’s first denuclearization policy.

President Moon appeared as a keynote speaker at the 76th UN General Assembly held in New York on the same day and said, “I propose that the two Koreas and the United States, or the two Koreas and the United States and China, gather together to declare the end of the war on the Korean Peninsula.” “The declaration of an end to the war is an important starting point for creating a new order of reconciliation and cooperation on the Korean Peninsula,” he said. President Moon also appealed to the international community to join in the end of the war.

What has changed this year is the fact that, along with North and South America, China was mentioned for the first time as the subject of the declaration of an end to the war. There are two main intentions. It may have been concluded that progress in the denuclearization process is still possible. The goal is to increase the probability of a declaration of an end to the war by putting China, North Korea’s blood ally, at the forefront. Also, as the Winter Olympics will be held in Beijing, China in February next year, the desire to use the Olympics as a stage for high-level contacts between the two Koreas or the end of the war seems to have been reflected.

In addition, the judgment that it is no longer easy to make a breakthrough in inter-Korean-North Korea-US dialogue with a bottom-up solution centered on working-level negotiations is also highly likely to have influenced the proposal for an end-of-war declaration. Due to the short remaining tenure, it was necessary to throw a ‘one-point shockwave’ through a top-down method such as the declaration of the end of the war by the leaders.

North Korea is provocative, the US is apathetic… Whether or not it works is unknown

President Moon Jae-in greets K-pop group BTS at the opening ceremony of the 2nd SDG Moment (high-level meeting of the Sustainable Development Goals) held at the General Assembly of the United Nations Headquarters in New York on the 20th. New York = Yonhap News

The key is effectiveness. First of all, it is unclear whether the US consent was obtained. At the time of the Korea-US summit held in May of this year, the government pursued a plan to express the consensus between the two leaders over the declaration of an end to the war along with the 2018 Panmunjom-Singapore Declaration. However, it is known that the Biden administration was opposed to specifying an end-of-war declaration in the agreement without interlocking denuclearization measures. A diplomatic source said, “The US was skeptical of the ROK-US announcement of an end-of-war declaration in a situation where negotiations on denuclearization between North Korea and the United States have not resumed.” From the US point of view, the declaration of an end to the war is not an ‘entrance’ to the denuclearization negotiations, but rather a ‘reward’ for practical measures.

President Biden’s speech on the same day also made clear the American perception. He said, “We pursue sincere and continuous diplomacy for the complete denuclearization of the Korean Peninsula,” but presented ‘a promise to improve the lives of North Koreans’ and a ‘possible plan’ as prerequisites. This is a marked difference from the approach of the Moon Jae-in administration, which seeks to find a clue to dialogue from the end of the war.

For now, it is unlikely that North Korea will respond. North Korea’s intentions were already confirmed at the North Korea-US summit in Singapore in June 2018. At that time, the government proposed to the United States a trilateral declaration of an end to the war between the two Koreas, but the United States put it on condition that North Korea’s ‘nuclear declaration’ was a condition. Then, in October of the same year, North Korea hinted that the declaration of an end to the war was not urgent, saying, “The end of the war is not a bargain that can be exchanged for our denuclearization measures.”

North Korea even conducted a ballistic missile test-fire banned by the United Nations on the 15th, solidifying its will to lead the situation on the Korean Peninsula according to the ‘North Korean-style timetable’. This means that there is little room for interest in the South’s proposal for an end-of-war declaration, which is nothing new. Park Won-gon, a professor of North Korean studies at Ewha Womans University, pointed out, “The government is lingering on cards that have been exhausted early.”