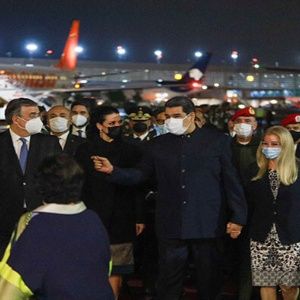 Venezuelan President Nicolás Maduro arrived in Mexico on Friday night to attend the VI Summit of Heads of State and Government of the Community of Latin American and Caribbean States (Celac) convened by Mexican President Andrés Manuel López Obrador .

Nicolás Maduro landed in the Mexican capital hours after his vice president, Delcy Rodríguez, arrived in the North American country to represent his country at the meeting.

Landing in Mexico! With the proposals that we will make in the Plenary of Heads of State and Government of CELAC. We come with the truth about Venezuela, Bolívar, Chávez and the Liberators. The Union is above differences. For the union everything, without it nothing! pic.twitter.com/GpW2fECmUk


“Foreign Minister Marcelo Ebrard received the President of Venezuela, Nicolás Maduro, at the International Airport of Mexico City for his participation in the VI Summit of Heads of State and Government of Celac that will be held tomorrow at the National Palace” , reported the Mexican Foreign Ministry in a message on Twitter.

Ebrard and Maduro met privately for a few minutes without the Mexican Foreign Ministry releasing the content of the conversation.

According to Mexican sources, Maduro will meet this Saturday with the Mexican president, Andrés Manuel López Obrador, on the occasion of the Celac summit

The presence of the Venezuelan president at the meeting had not been confirmed until Friday afternoon, in which his place would be taken by the vice president.

Later, an official of the Mexican Foreign Ministry confirmed that President Nicolás Maduro was flying to Mexico to attend the VI Celac summit.

The VI Summit of Heads of State and Government of Celac will take place from Saturday in the Mexican capital.

With 16 presidents, two vice presidents, prime ministers and foreign ministers, this conclave will hold as a central theme the strengthening of the regional mechanism to replace the Organization of American States (OAS).

This Saturday, follow the live transmission of the VI Summit of Heads of State and Government, CELAC 2021, starting at 8:00 am on our digital platforms. pic.twitter.com/KLwiDLg7WU


The meeting will focus on the joint confrontation with the Covid-19 pandemic from the production and development of medicines and vaccines, the confrontation with climate change and the creation of a disaster fund for that purpose.

It will also address the issue of the Blockade of Cuba, the situation of the Malvinas Islands, COP26 and indigenous languages ​​and peoples, among other topics.