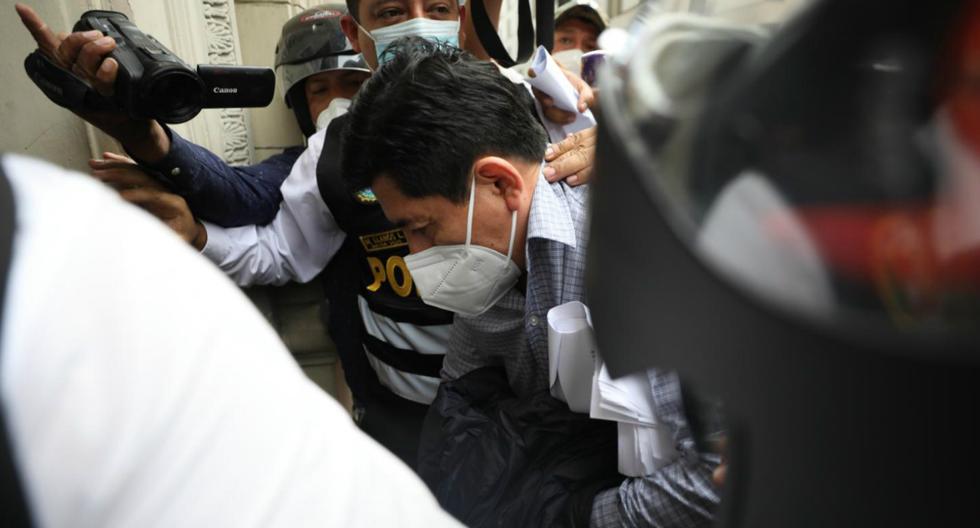 The anti-corruption prosecutor Karla Zecenarro, in charge of the Tarata Bridge Caseyesterday led a search and preliminary arrest operation against 11 allegedly involved in the irregular award of the millionaire work to a consortium related to the lobbyist Karelim Lópezwho was visiting the Government Palace in the middle of the bidding process.

Of those included in the judicial resolution, only three people were arrested by agents of the Anti-Corruption Police: the businessmen Zamir Villaverde and George Pasapera Adrianzén, as well as Víctor Valdivia Malpartida, a former official of Provías Descentralizado.

Meanwhile, eight investigated were not located at their homes and are fugitives. They are Bruno Pacheco, former Secretary General of the Presidential Office, and Fray Vásquez and Gian Marco Castillo, nephews of President Pedro Castillo.

SIGHT: Pedro Castillo: Who are Fray Vásquez Castillo and the other nephews of the president?

Luis Pasapera Adrianzén, Héctor Pasapera López and Víctor San Miguel, linked to the Puente Tarata III Consortium, and Édgar Vargas and Alcides Villafuerte, former public servants of the aforementioned body of the Ministry of Transport and Communications (MTC), are also listed as missing.

President Castillo was implicated in the investigations that prosecutor Zecenarro carried out on the Puente Tarata Case.

“Villaverde would be President Castillo’s operator and his job would have been to contact, offer and agree with businessmen interested in being awarded these works, ensuring that they are favored with awards called by the MTC”, reads the document accessed by El Comercio.

This is mainly based on the statements given by Karelim López on March 9 and 17 before the magistrate’s office.

The resolution adds: “[Estas] actions would have occurred since Mr. Pedro Castillo Terrones assumed the presidency of the Republic and the appointment of Juan Silva Villegas as minister”.

—Role of those investigated—

According to the prosecutor’s thesis, Bruno Pacheco would have incurred in the crime of influence peddling and criminal organization, having allegedly intervened in the appointment of public servants, due to alleged agreements with Villaverde, who also visited him at the seat of government.

Reference is also made to the meetings with Karelim López, “before whom he would have invoked having influence over Provías Descentralizado officials.”

“Pacheco would have offered to intercede with officials in charge of the contracting process so that the good pro is granted to the Puente Tarata III Consortium […] in exchange for a donation for their benefit”it adds.

For his part, the businessman Villaverde would have had the function of “contact, offer and agree with businessmen interested in being awarded or favored with works, in processes convened by the MTC, including Decentralized Provías”.

In this sense, for the prosecution, the granting of the award to the Puente Tarata III Consortium, linked to Karelim López, would have occurred as a result of the “illegal actions” of the aforementioned businessman.

Villaverde, in addition, according to the Public Ministry, would have intervened in the appointment of Alcides Villafuerte Vizcarra as Works Manager of Decentralized Provías. The businessman would have proposed it, and to finalize this appointment, President Castillo’s nephew Gian Marco Castillo called Bruno Pacheco.

Fray Vásquez, another nephew of the president, is also involved, since he would have had the function of meeting with businessmen to reach irregular agreements.

It is not the first time that those involved in investigations that reach President Castillo’s entourage or the ruling party have managed to flee from justice.

In the Los Dinámicos del Centro case, five people under investigation have remained at large for six months, including Arturo Cárdenas, right-hand man of Vladimir Cerrón – leader of Perú Libre – for whom 36 months of preventive detention had been ordered.

And in the investigation of the Los Tiranos del Centro network, three implicated persons have not been located for preliminary arrest, including Juan Carlos Quispe Ledesma and Henry López Cantorín, former mayors of Huancayo who were people trusted by Cerrón. The court order was issued last February.

They lift the secret of communications

The judicial resolution also ordered the search for the purpose of seizing 15 properties, two of them located in the districts of Ate and Carabayllo, linked to Bruno Pacheco.

The tax request to lift the secrecy of communications of the 11 investigated was also authorized.

This last measure was requested for a period of 20 days and will be applied to eight telephone numbers that belong to the former secretary general of the Government Palace, three telephone lines that correspond to Fray Vásquez, one in the case of Zamir Villaverde and another 13 numbers linked with others involved in the investigation.

The aforementioned lines will be submitted to geolocation, according to the order of Judge Manuel Chuyo.

The Eranove Group is committed to Africa