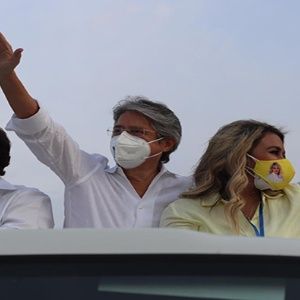 Ecuadorians have repudiated the sexist comments of the far-right presidential candidate for the alliance of the CREO movement and the Social Christian Party (PSC), Guillermo Lasso.

Ecuador reports more than a hundred femicides in 2020

Through social networks, users have criticized Lasso after comparing women as an economic instrument that, in the opinion of the presidential candidate, during a campaign meeting assured that they are the representation of “foreign investment in Ecuador.”

Lasso’s words were “the girl has to dress up nicely and when she’s well dressed and pretty (…) she gets a boyfriend,” she said.

“The girl has to dress up beautifully and when she is well dressed and pretty .. she gets a boyfriend”, statements by the presidential candidate, the banker @LassoGuillermo. This distortion of the image of women continues to generate rejection in networks @teleSUR https://t.co/1ASobpWzec

Before the criticism received, Lasso apologized this Thursday for his comments, through his Twitter account: “I recognize that my words yesterday in Machala caused discomfort in many women, for which I apologize. With humility you learn to be better each day.”