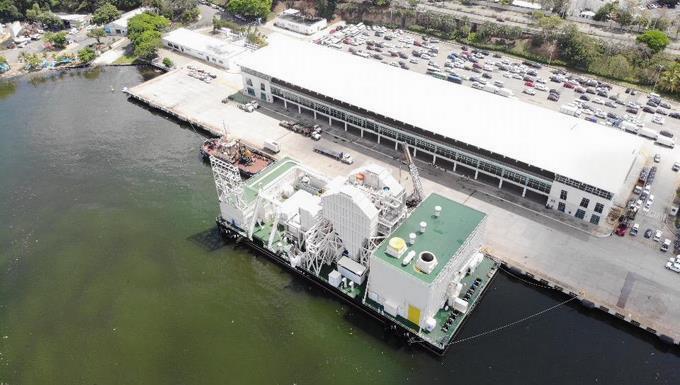 The spokesman and director of Strategy and Communication of the Presidency, Homero Figueroa, stated that the entry into commercial operation of the floating plant Estrella del mar III and the contribution of another 515 megabytes, the national electrical system is returning to normal.

In addition to the Estrella del Mar III plant, 100 MW from Falcondo, 100 MW from Barrick, 50 MW from Sultana del Este and the reintegration of the Haina TG plant with 85 MW entered the system; and also, the increase in the dispatch of hydroelectric generation by 200 MW.

Figueroa points out in a statement that the Estrella Del Mar III floating plant, with a total investment of some US$200 million for its construction and installation, begins its commercial commissioning. It is a 146MW power generation barge, exclusively using natural gas and with a configuration that includes two (2) 50MW gas turbines and a combined cycle, using a 46 MW steam turbine and which is the largest power plant efficient and technically advanced in the country.

It is also equipped with a battery system or BESS (its acronym in English that means Battery Energy Storage System) which gives us a better option in terms of efficiency, lower O&M cost and environmental performance to provide a safe base power load.

This is added to the 110 MW Estrella Del Mar II floating plant, installed 10 years ago, being a dual fuel plant (it operates with both natural gas and fuel-oil) with a configuration of 6 17 MW engines and a combined cycle of about 10 MW.

The set of both plants and the complementary infrastructure for their operation represent a total investment that is close to $350 million and offers a clear sign of trust in the Dominican Republic.

Transcontinental Capital Corporation (Bermuda), Ltd. is a subsidiary of Seaboard Corporation, a Fortune 500 company that owns and operates several diversified businesses, including the manufacture of food products, commodities and maritime transport, operating for 32 years as an electricity generator in the Dominican Republic.

Armando Rodríguez, general manager of the company Seabord, indicated that “concluding any project of this magnitude represents an enormous challenge and, in this case, it has been even more so, since we have had to deal with all the difficulties that the COVID-19 has brought, however, we have overcome them. Likewise, since the new plant arrived in the country for its installation a year ago, there have also been great challenges here and we have been able to overcome them thanks to the tremendous support received from President Luis Abinader and his administration.”

The Government is also committed to renewable energy

The document indicates that the least costly and efficient way for the country to resolve the problem of the blackouts and the fuel crisis in the international market is through the stimulation and promotion of the production of renewable energies.

To advance the plan get you 25% of the energy matrix is ​​renewable, the sector authorities have inaugurated projects, approved and signed clean energy production contracts for more than 600 MW.