In 2016, the talented team ofUbisoft Annecy was going out Steep, an extreme sports game combining skiing, snowboarding, wingsuiting, paragliding, sledding, base jumping, speedgliding or even wingsuit rocket. The game featured two open-worlds that were located in the Alps and the Rockies in the United States.

Quite nice, fun and even relaxing when we went sliding in the open world with just a little soft music to accompany us, the game had the right to good feedback with a satisfactory follow-up.

Riders Republic aims to follow in Steep’s footsteps by going even further. Announced on September 10, 2020, the game is a true declaration of love for extreme sports enthusiasts. A more ambitious project managed by the Annecy studio and six other studios including Ubisoft Montpellier, Belgrade, Pune, Berlin, Kiev and Odessa.

Everything the Republic can offer you …

From the first minutes, we were in the bath with a race allowing us to test several disciplines of Riders Republic. First by bike to perform our first tricks, hurtle down the first steep slopes and negotiate our first slopes. As we approach a jump that promises to be dantesque, the game switches to send us into the air in the middle of a wingsuit rocket race between the rocks of Bryce Canyon. The title provides good sensations and offers pretty panoramas. It’s a feast for the eyes, but we don’t have much time to admire the scenery. New transition to appear in the last stage of this crazy race with a beautiful descent on skis.

Riders Republic amazes us and we feel that the priority of the title is to give us a good time with a lot of fun in a gigantic environment. Small flat, we directly find the recurring fault of all Ubisoft games. Riders Republic clearly lacks identity and it feels like we are playing The Crew 2 in an extreme sports version. 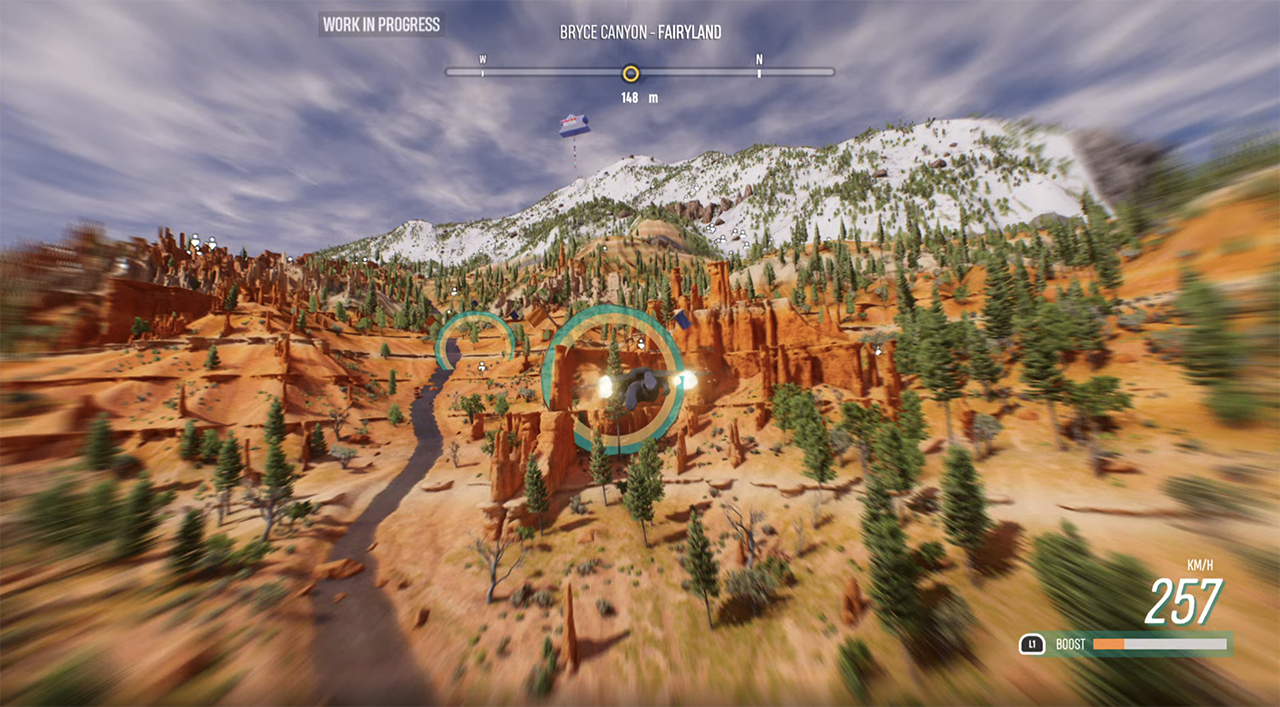 Most of Ubisoft’s open-world action games (Assassin’s Creed, FarCry, etc.) benefit from the same pathways (such as having to climb to the top of a tower, tree or building to discover the game map for example). We feel like it’s the same with Riders Republic. The game seems to take the basics of The Crew, with a fun and quirky festival broadcast on a channel that follows the entire competition. The game offers several disciplines and the possibility of switching on the fly between cycling, skiing and the rest of the categories. All in a gigantic open world.

In itself, that’s not very disturbing, but it does prove that Ubisoft has a tendency to go around in circles. The studio struggles to make games that really stand out from each other.

Ready to join the Republic? 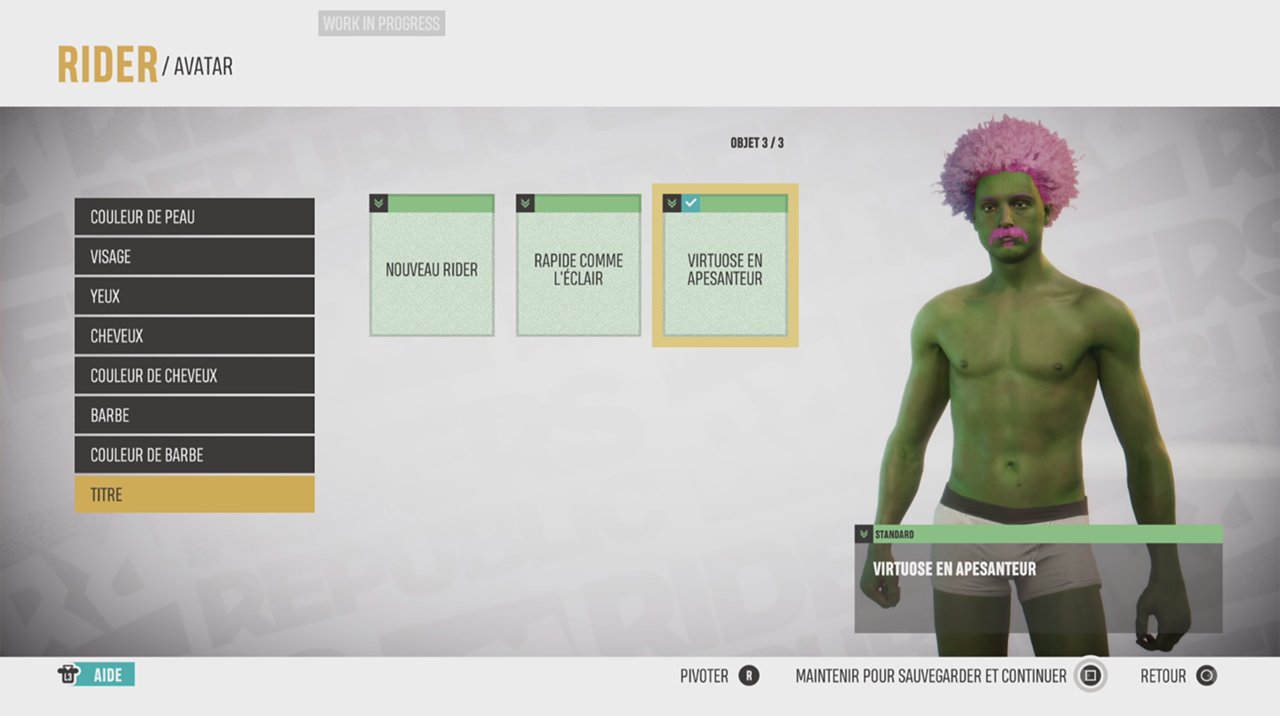 Your first steps in Riders Republic will be in the character editor. The offbeat side is well assumed allows to create an atypical avatar (male or female)! You will be able to create a character with green skin and a wacky hairstyle. Let your imagination surprise you! Don’t rely on a very sophisticated creative system, that’s not the point. The idea is simply to be able to create a quirky avatar to equip it as it should afterwards.

Before taking the plunge, you can choose your controller configuration to be more comfortable in performing your tricks. You can opt for a style Pilot allowing you to do your tricks with the action buttons (A, X, Y, B or Cross, Square, Triangle, Circle) or the configuration Trickster which allows you to perform the figures with the analog joysticks. 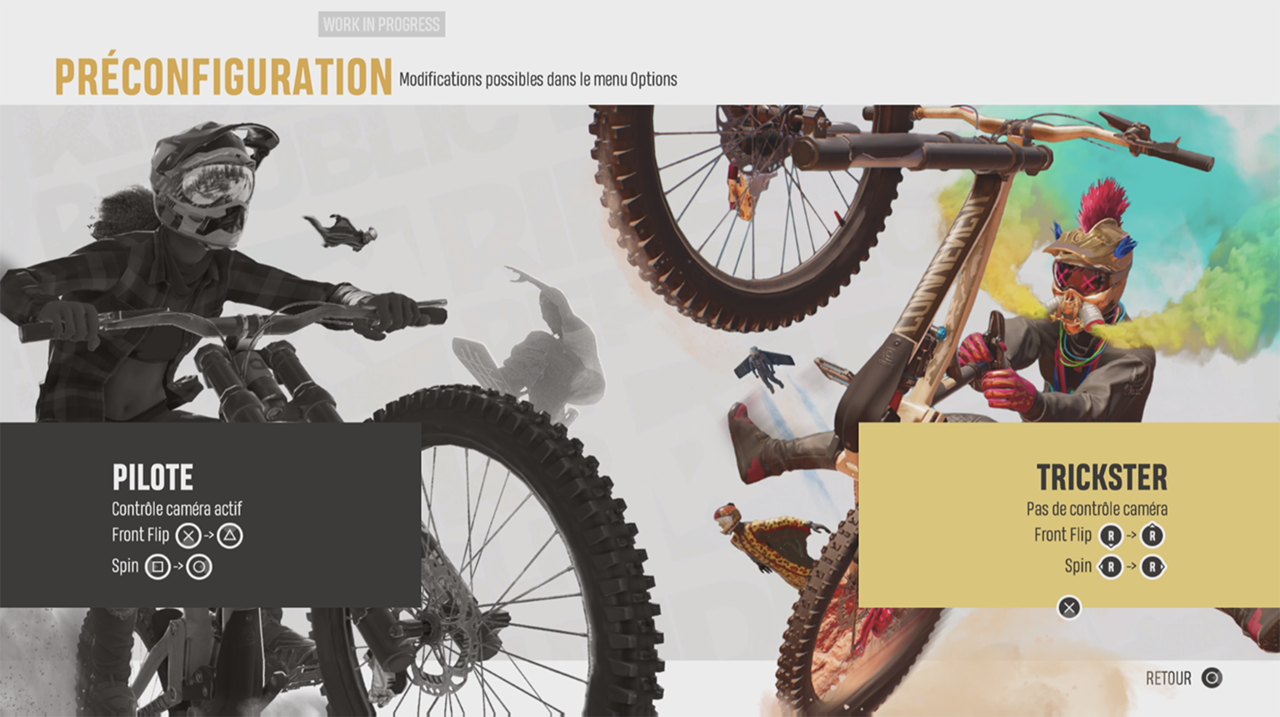 Once these little details are sorted out, it’s time to join the Republic. The game begins at Riders Ridge. This is the hub where all the riders come together to buy equipment, train, meet other riders and start different activities.

We very quickly meet Suki, a rider who has heard about us and wants to help us. Then again, as with most Ubisoft games, we are treated to a horrible French version. There is no credibility in the intonation or in the animations of the characters. We really advise you to play in original version to limit damage.

Suki introduces us to Brett, the legend of Riders Ridge who will take us under his wing to make us the best rider in the region. If the dubbing is catastrophic, we can see that the Ubisoft teams have taken care in writing the game and that there has been clear progress since The Crew 2. It is not yet sensational, but it there are some nice gags with a good staging. 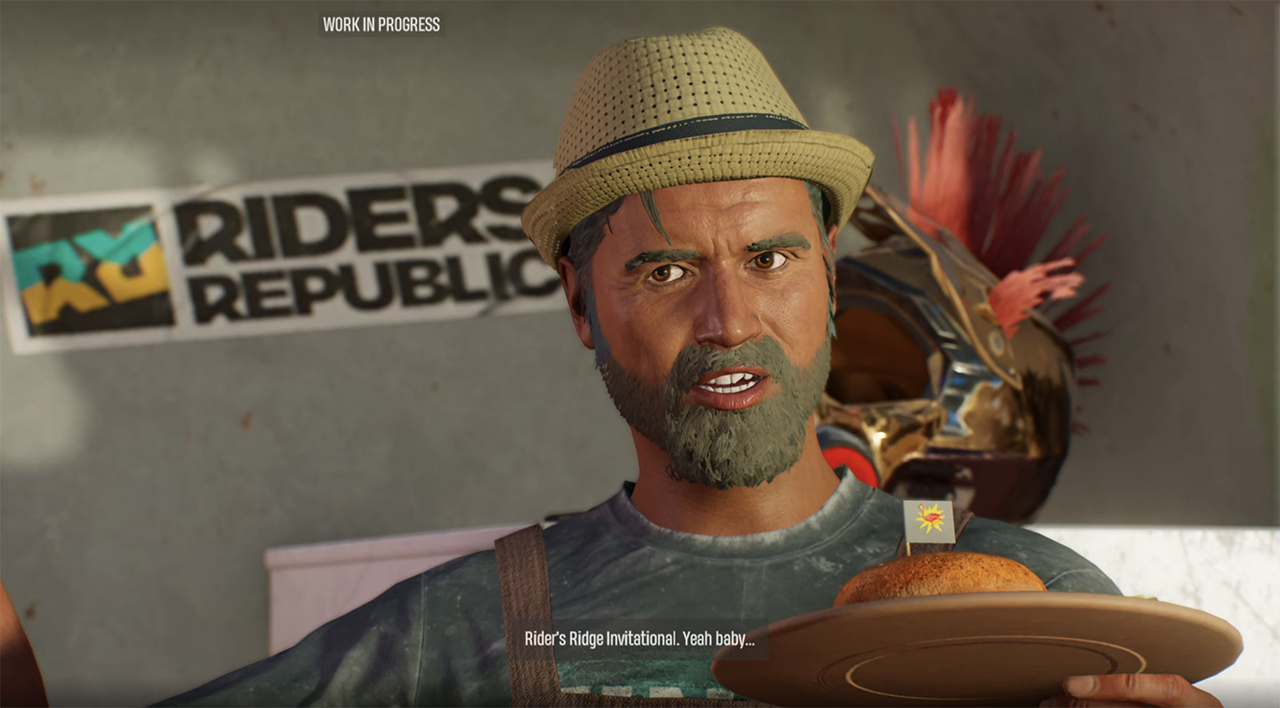 Your goal will be to participate in the great Rider’s Ridge Invitationnal competition. For this, you will have to win many events in all disciplines to make a name for yourself and earn stars. Again, we find exactly the same progression as in The Crew 2.

In the beginning, you will start your career with bike racing. Do not hesitate to chain the challenges, travel the world of Riders Republic to discover points of view, secret objects, make jumps to the four corners of the map to earn more and more stars. Once done, you will unlock other disciplines until you qualify for the Rider’s Ridge Invitationnal.

Once the meeting with Suki and Brett is over, you can finally launch your career and participate in your first bike races. You have several events such as off-road races or on asphalt and events in partnership with Red Bull, Fox or Santa Cruz.

Riders Republic adopts a very arcade gameplay. Precision will not be the key word. It takes fun and too bad if your tricks are not very precise or your trajectory is not ideal. You will not fall at the slightest opportunity and you will sometimes perform surreal actions. This has the advantage of not cutting you off and that’s quite a good thing. Some races will take you through very narrow paths that would be impossible to cross if the game adopted more demanding gameplay. 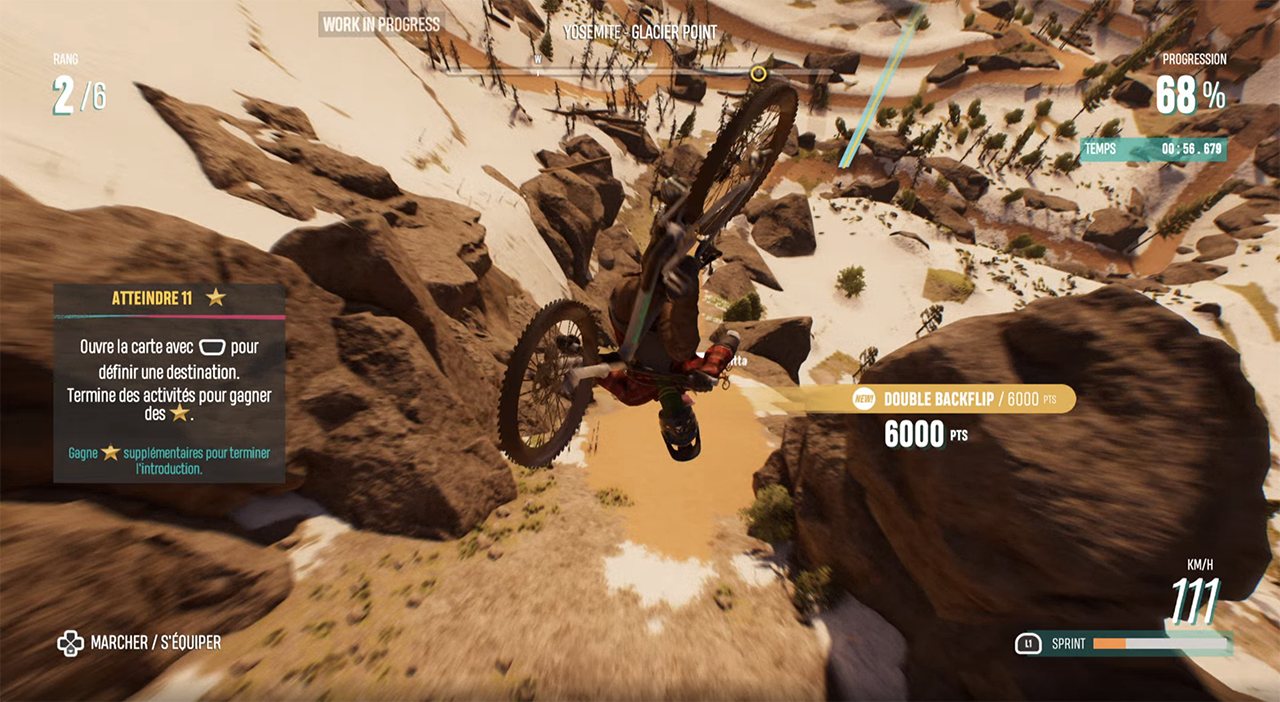 Some will regret this “too arcade” side, but this makes the game accessible to all. In addition, you will quickly realize that a fall is quite punitive and that it will be difficult to win the event if you do not race without falling. Riders Republic offers a “rollback” system, but the latter is not really beneficial.

If you fall or are not happy with your trick, you can press R1 to go back in time. However, there is only your character who goes back. Your competitors are only in slow motion, but they continue to run. So this mode can sometimes waste more time than anything else. In the event of a fall, the easiest way is to repeatedly press the round button (or B on Xbox) to reappear directly on your bike. 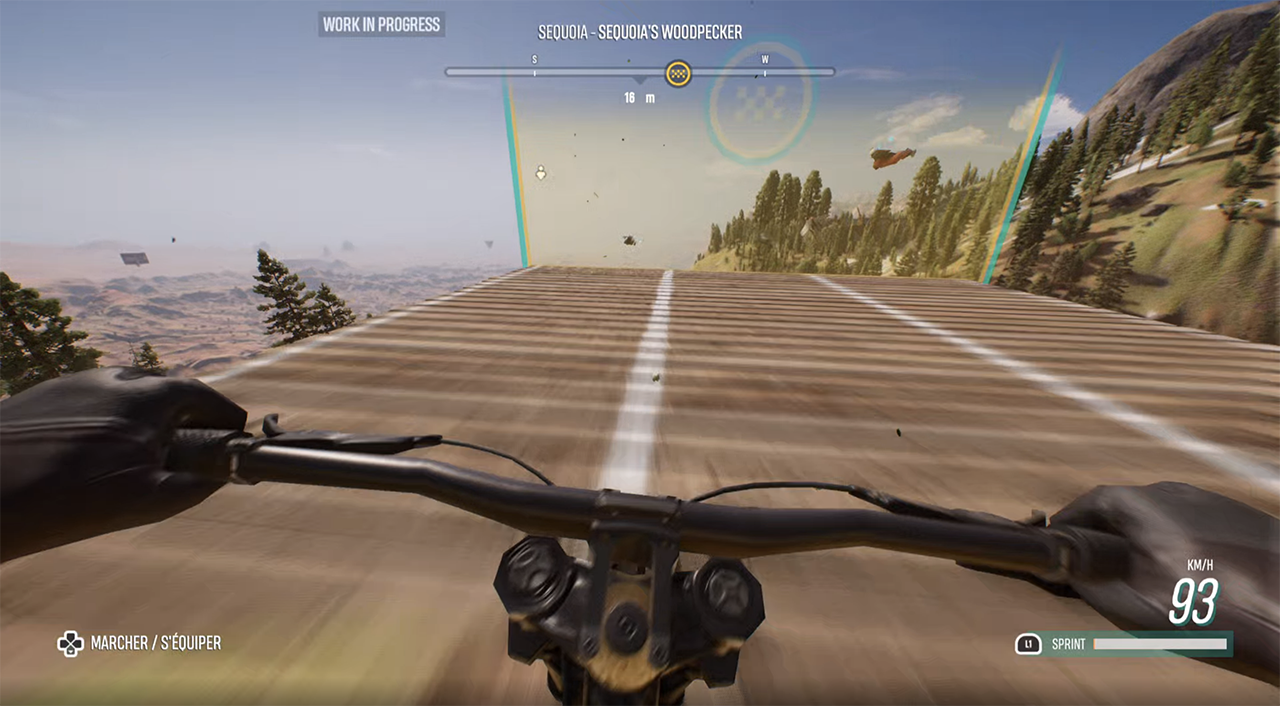 With the “square” key (or X on Xbox), you can switch to first person view. Clearly, this is a big highlight of the game and it allows you to get the best sensations! By bike, on foot, by snowmobile or even in a wingsuit, the results are striking.

After several races in the bike category, you will unlock other disciplines such as skiing or snowboarding. For these events, the objective will not be to bet on speed, but on your agility to score the most points thanks to your tricks. Before jumping into this category, you will have the right to a small initiation session at Rider’s Ridge to teach you how to perform your best tricks with the controller configuration you chose at the start (Pilot or Trickster). 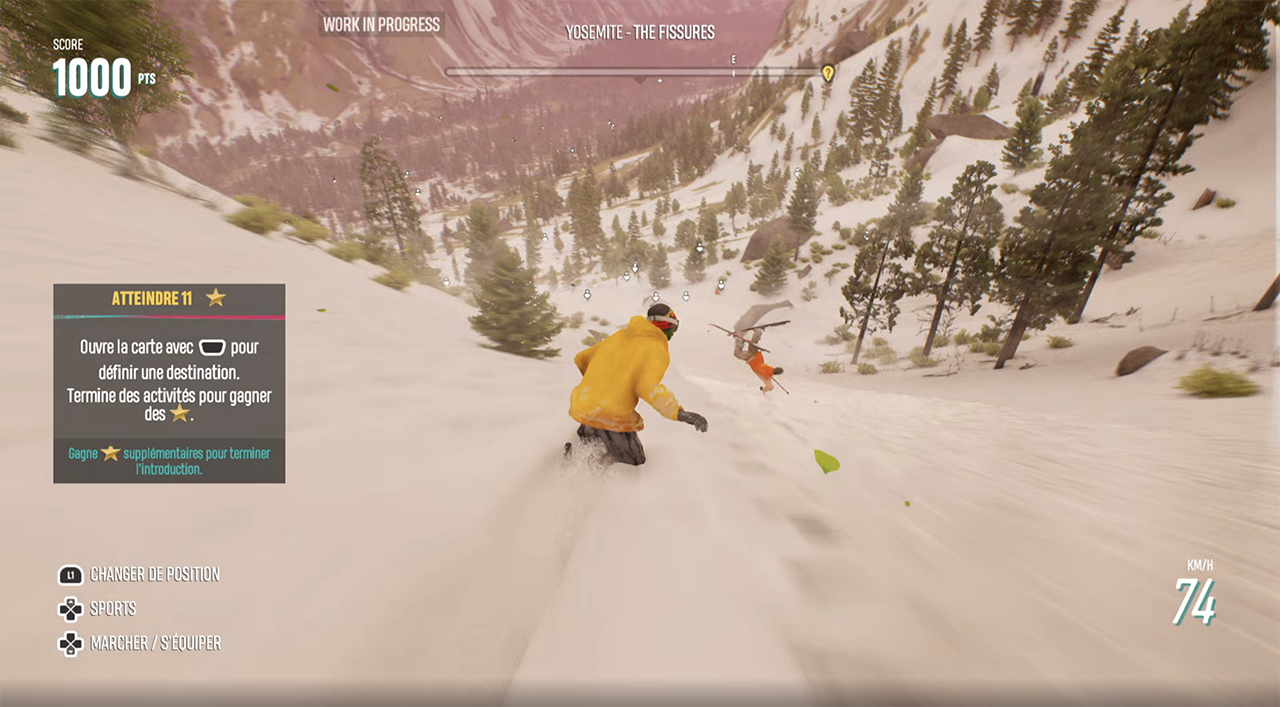 In Riders Republic, the choice is yours. Either you go through a series of events to earn stars, unlock new bikes, snowboards, skis… and gain access to other disciplines.

For this, Ubisoft took the initiative to create an imaginary map to bring together the seven places next to each other. In contrast, the parks themselves have been faithfully recreated. 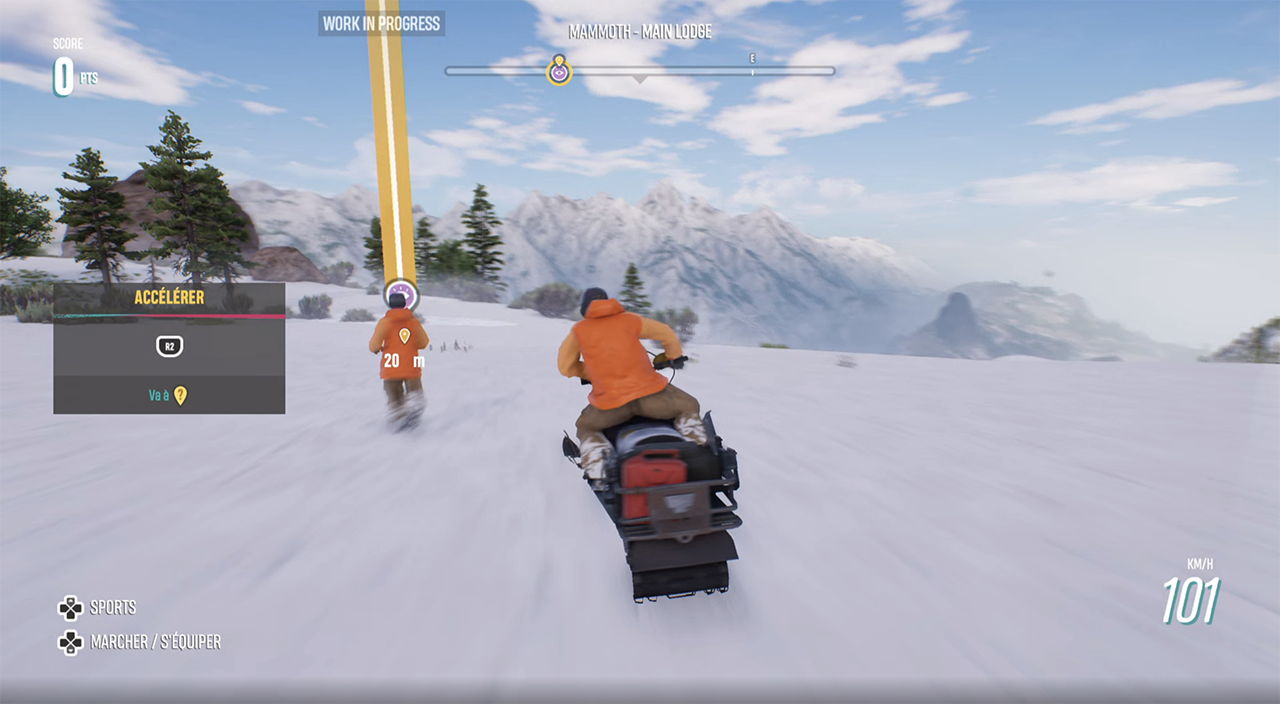 To explore this vast world and discover many points of view, special objects and other relics, you will be able to travel by snowmobile (which will be much faster than on skis or snowboard). When you descend lower and the snow melts, your bike will be ideal for exploring the surroundings.

As in The Crew 2, you can access a wheel to select different disciplines and change gear from second to second and at will. However, we do not recommend road biking in powder snow and snowmobiling on asphalt. Do whatever you want with these tips! 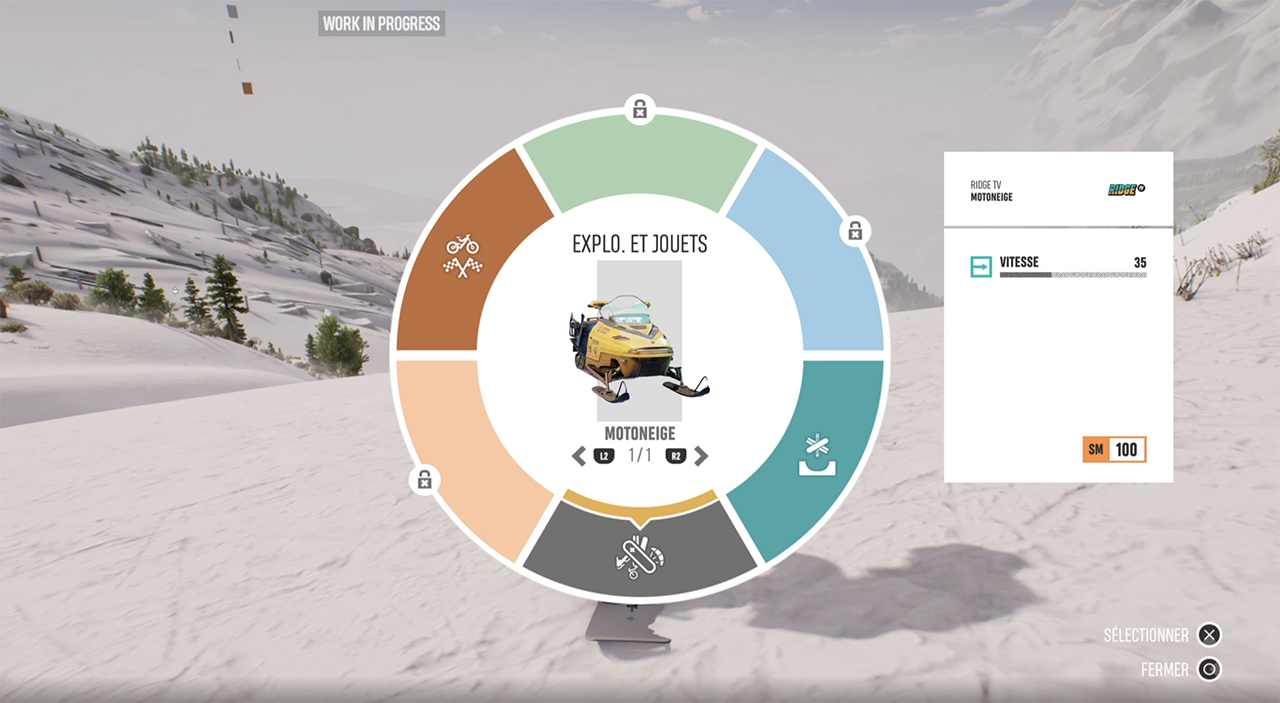 Finally, to conclude with this first glimpse of Riders Republic, you can also have fun with the other players since the title is above all an MMO (massively multiplayer game). Hundreds of players are available on the map and you can ride with them at any time. Some races will be able to accommodate up to 50 participants at the same time (limited to 20 on PS4 and Xbox One).

Among the fun game modes to do with others (and especially with friends) you have the “Tricks Battle Arena”. This is an event with teams of six players who compete in an arena where the objective is to achieve the most tricks in order to score “tricks points”. The team with the most points wins.

Our first opinion on Riders Republic 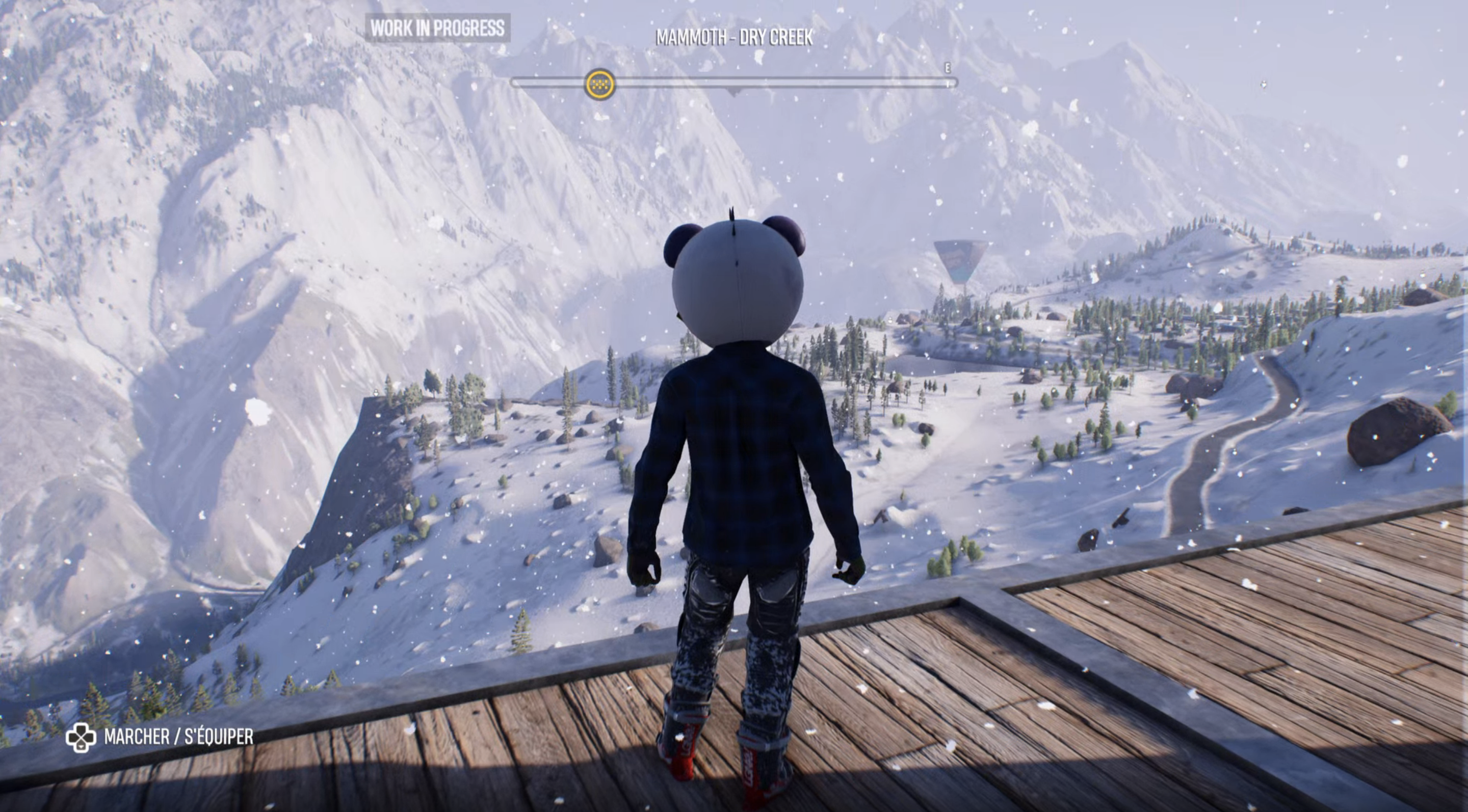 It only takes a few hours at Riders Republic to be convincing and make us want to see more. Despite a few small flaws recurring in Ubisoft games (such as a delicate French version and a feeling of déjà vu), the title has some strengths that allow you to have a good time. It remains to be seen whether these assets will manage to entertain us over time and whether we will not tire of this gigantic world after several hours.

In addition to a few bugs that will be fixed, we hope, by the release of the game, Riders Republic seems to be ideal for lovers of skiing. Whether on land, in powder or in the air, there will be something for everyone with good sensations, especially in first person view.

The MMO orientation brings a plus and allows you to participate in funny events bringing together many players. And the huge playground already promises beautiful walks online with friends for long winter evenings. See you on October 28 for a final opinion!