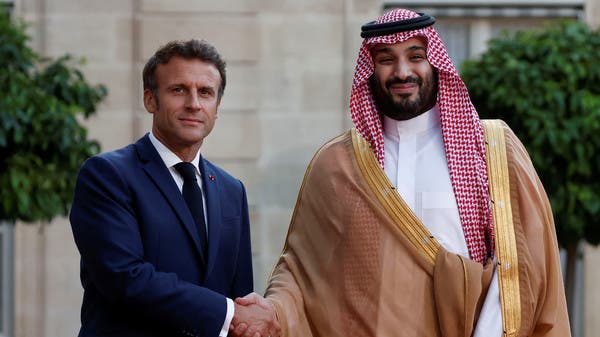 As soon as the Crown Prince arrived at the Elysee Palace, he was received by the French President, who welcomed the Crown Prince in France, wishing him and his companions a pleasant stay, while the Crown Prince expressed his happiness with this visit, quoting the Saudi Press Agency (SPA).

The Crown Prince and the French President held an extensive meeting in the presence of the delegations of the two countries. The two sides’ talks focused on bilateral relations and regional developments.

On the French side, it was attended by Minister of Economy, Finance, Industrial Sovereignty and Digital Brunoulli Meyer, Minister for Europe and Foreign Affairs Catherine Colonna, Minister for Energy Transition Agnès Pannier Rancher, Minister for Sports, Olympics and Paralympics Amelie Odea Castera, and Minister in charge of Europe, Foreign Trade and Affairs of French Abroad Oliver Becht, Ambassador to the Kingdom Ludovic Boel, Chief of Special Staff of the President of the Republic, Admiral Jean-Philippe Roland, Diplomatic Adviser to the G7 and G20 Sherpa Emmanuel Boni, Deputy Diplomatic Adviser in charge of Strategic Affairs and Disarmament at the Presidency of the Republic Alice Ruffo, and Adviser to North Africa and the Middle East at the Presidency of the Republic Patrick Dorrell, and President of the French Public Investment Bank, Nicolas Dufour.

Later on Thursday, Prince Mohammed bin Salman sent French President Macron a cable of thanks after leaving Paris after an official visit.

The text of the telegram said: “As I leave your friendly country, I am pleased to express to Your Excellency my deepest gratitude and appreciation for the warm reception and hospitality I received and the accompanying delegation. The discussions that we had with Your Excellency confirmed our common desire to strengthen the strategic partnership between our two friendly countries in all fields, and to work On the continuation of coordination and consultation on issues of common interest, under the leadership of the Custodian of the Two Holy Mosques King Salman bin Abdulaziz Al Saud and Your Excellency, which aims to achieve the interests of the two friendly countries and peoples, and to enhance security and stability in the region. More progress and prosperity.

The Crown Prince had gone to France, the second and last leg of his European tour after Greece, to discuss relations between the two countries and ways to enhance them in various fields.

The arrival of the Crown Prince to the Elysee, and Macron to receive him

The visit of the Saudi crown prince came after a similar visit by Macron to Jeddah last December.

The strength of relations between Riyadh and Athens

The Saudi Crown Prince left Greece on Wednesday after a two-day visit that witnessed the two countries signing a number of memoranda of military and economic cooperation.

Mohammed bin Salman during his visit to Greece – SPA

Before his departure, the Saudi Crown Prince confirmed that his visit to Greece provided an opportunity to emphasize the strength of relations between the two countries.

The signatures also included the inclusion of an agreement for understanding and cooperation in the health field, in addition to a memorandum of understanding in the field of scientific and technical cooperation.

These official visits to Greece and France come at the direction of the Custodian of the Two Holy Mosques King Salman bin Abdulaziz Al Saud, and out of his keenness to communicate and strengthen relations between the Kingdom and brotherly and friendly countries in all fields, and in response to the invitations made to Prince Mohammed bin Salman, according to a statement from the Court. royalist.

News 24 | After raising the interest rate, which sectors are affected and which are benefiting?

Draw in Northern Ireland. Lackluster FCB is in the third qualifying round of the Conference League.