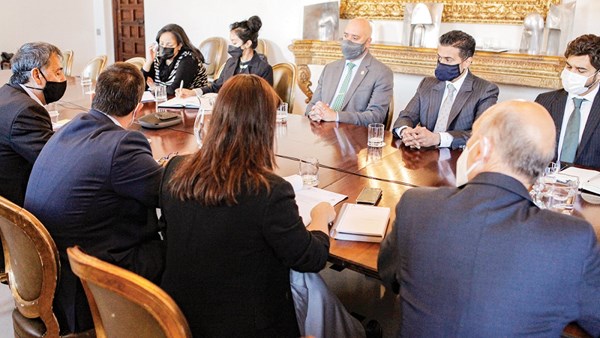 The Sharjah Book Authority and the Spanish Ministry of Culture discussed the details of Spain’s participation as the guest of honor in the fortieth session of the “Sharjah International Book Fair”, which will be held at the Expo Center Sharjah during the period from 3 to 13 November, under the slogan “Here .. you have a book.”
This came during a meeting held at the headquarters of the Spanish Ministry of Culture in Madrid, which was attended from Sharjah by a delegation from the Sharjah Book Authority, headed by Ahmed bin Rakad Al Ameri, Chairman of the Authority, Majid Al Suwaidi, UAE Ambassador to Spain, and from the Spanish side, Victor Francos, Secretary General of Culture and Sports, Maria José Gálvez, Executive Director of the General Directorate of Books of the Spanish Ministry of Culture and Sports, and Faustino Díaz, Adviser at the Sub-Directorate General for International Relations and the European Union.
The representatives of the ministry stressed that the Spanish cultural movement is looking forward to presenting the creative industries and publishing market to the Arab cultural scene through the “Sharjah International Book Fair”, one of the three largest book fairs in the world, and revealed the size and richness of the cultural program that will be held at the fair, with the participation of a selection of writers. Spanish creators and representatives of Spanish cultural institutions and bodies.
They considered that Sharjah’s celebration of the Spanish cultural experience enhances cultural relations between the emirate and Spanish cities, and opens up new opportunities for Spanish publishers in the book industry market in the UAE and the region, noting that Sharjah is a broad gateway to expanding publishing business not only at the Arab level, but also at the international level. Global.
For its part, the delegation of the Sharjah Book Authority considered that the celebration of the Spanish cultural experience at the “Sharjah International Book Fair” is an addition to the exhibition program and enriches the experience of its visitors, especially since what Spain has provided for culture, art and human creativity is present and known to the public in various countries of the world.
It is noteworthy that the meeting of the Sharjah Book Authority with the Spanish Ministry of Culture came in conjunction with the activities of the “Sharjah Literary Days” in Madrid and Cordoba, which witnessed a series of dialogue sessions that brought together Emirati and Spanish intellectuals and were held at the “Arab House” in its two branches – Madrid and Cordoba.