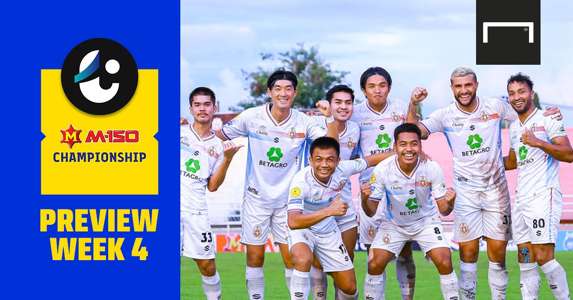 Thai League 2 continues to unfold this weekend. There are many pairs of interesting games. Who meets anyone, check it out here.

Football M-150 Championship 2021-22 continues into the 4th game of the season, playing on September 18-19, 2021. After passing the first three games, Trat FC stand at the top of the crowd with a record of 9 points. By this weekend, there are many interesting games, especially the meeting between Sukhothai FC and Lamphun Warriors, and this is a program that football fans should not miss.

Ratchapracha prepares to play at Leo Stadium with the goal of winning the first game. But their opponent this week is Trat FC, the leader of the pack led by “Aunt Shwe” Somchai Chuayboonchum, who has won 3 matches in a row. can or not

The game at Talay Luang Stadium on Saturday Considered to be another match that fans of the Second League are looking forward to when “Bat Fire” Sukhothai FC will enter the field to face the new undefeated, Lamphun Warrior, who the host wants to return to good form. Came after missing the invasion of Trat FC in the middle of the week. The away team is very active, especially Jeffrey Suarez, a former Barcelona attacker. who started the score in Thailand already

Another team that scores in every match after the first three games, Custom Ladkrabang will play at home against Chainat Hornbill, who have not won any team since the start of the season. The game is interesting as to whether the Great Bird can regain the faith of the fans or not, with only three challenges.

“Tahan Nam” Royal Navy under the supervision of the Japanese coach Mizuo Katto. is in a difficult situation After going on the field for 3 games, losing in a row, most importantly, still can’t blow up the opponent’s net, not even a single ball. Will play at home against Nakhon Pathom United’s “Coach Thong” Thongchai Sukkoki, who wants to win the first game of the season as well.

Continue reading the article below.