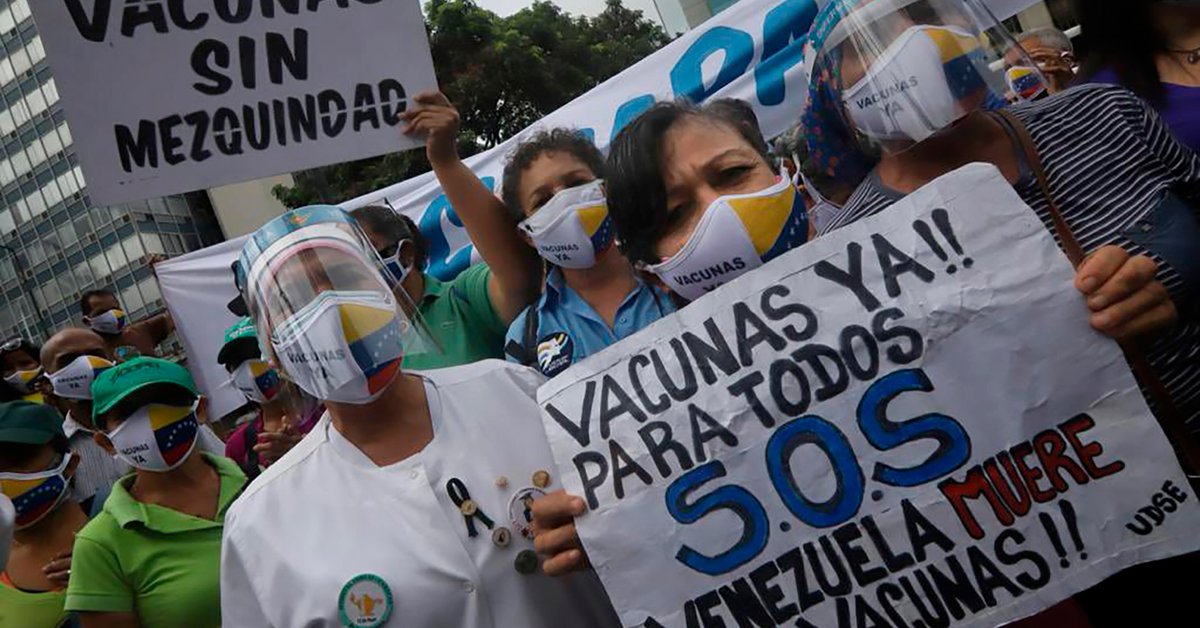 Dozens of Venezuelans protested this Friday in Caracas to demand, under the slogan of “Vaccines for all”, the mass immunization of the population against COVID-19 under a system planned, transparent and public.

The protest was headed by the opposition front of women “Venezuela Libre” and members of the College of Nursing of the Venezuelan capital who denounced lack of clarity on the amount of vaccines that have reached the country and the number of people immunized.

“Let’s save Venezuela, vaccines now”, demanded the interim president, Juan Guaidó, who joined the mobilizations. “To save our entire country, a National Salvation Agreement is urgently needed to allow us to get out of the tragedy,” he added.

Likewise, the opposition leader asked citizens “not to fall” into illegal markets for the sale of vaccines: “It is not a save who can. It is that we all save ourselves together. We are going to demand vaccines for all Venezuelans ”.

Juan Guaidó participated in the mobilization

The president of the Capital District Nursing College, Ana Rosario Contreras, asked the Minister of Health of the Chavista dictatorship, Carlos Alvarado, what tell the country the truth about what happens to vaccines and the virus.

“I have to tell the Minister of Health that the first thing he has to do is tell the country the truth, when he says that a 90% of health workers are vaccinated, he refers to Caracas but Caracas is not Venezuela“Contreras said, during the protest.

The nurse, a leader in the protests of the nursing sector and who has been denouncing the precariousness of the Venezuelan health system for years, asked the minister who visit the states of Portuguesa, Barinas or Aragua, in the west and center of the country, respectively, to keep the situation in those regions constant.

As reported, health personnel in those states face difficulties in protecting themselves from the coronavirus, for not having the proper uniform or for the collapse of the hospitals.

For her part, the president of the Caracas Women and Family Front, Marlene ledezma, indicated that what is happening in the country with vaccination against COVID-19 is “worrying”, due to the lack of information about the process.

Ledezma also expressed his lack of confidence that the regime of Nicolas Maduro can achieve the immunization of 70% of the population this year, as promised by the Venezuelan dictator.

“Having trust in the government is not viable. We really do not have a certainty that this could happen, but nevertheless we as Venezuelans we must fight for that to be fulfilled”, He pointed out.

Venezuela is, according to national and international organizations, in the last positions in Latin America in immunization against COVID-19, a fact that the regime avoids mentioning.

In this context, Maduro announced last Sunday that 1,300,000 new doses from China arrived on an unspecified date., a fact that the opposition doubts, as said arrival was not offered in the state media, that they did advertise and repeat the previous receptions for days, some with only 50,000 units.

Guaidó said on Wednesday that “it is a lie” that that amount of vaccines has arrived in the country. The interim president recalled, during a press conference in Caracas, that when a few thousand doses arrived in the country, Chavismo published photos, videos, publicized the arrival and even, on two occasions, summoned the media, while on the supposed new batch there are no images or additional information.

Venezuela accumulated 228,828 cases of covid-19 and 2,576 deaths as of Thursday, according to official figures; a fact that is questioned by the interim government of Guaidó.