Sony had taken care of the new range of accessories planned for the launch of its PlayStation 5, and among them is the Pulse 3D, the headset to highlight the new audio features of this next-gen, among others. After the Gold and Platinum, spearheads of the PS4 if any, this 3D pulse arrives in an intermediate sector in terms of price, but despite everything with a desire to mark the spirits, at least the ears. Have they been flattered or rather flogged? A brief overview of our impressions-sions-sions …

The rendering of sound spatialization is frankly excellent, and perhaps even still under-exploited.

No need to look at it from all angles to understand that it takes, like the other accessories of the launch, the design more than inspired by the PlayStation 5, and the black and white color duo already engaged on the PlayStation VR. Pretty curves on the main arch, ends of the arch with the symbol PlayStation (like the remote control, DualSense or the camera), grip under the arch identical to that of the DualSense or the shell of the PS5; Sony took to heart to make its range of accessories homogeneous and fitting in terms of design, also to distinguish it from all the previous ones. The 3D pulse is still inspired by Platinum, from which it uses the intermediate rubber arch for head support and very thick pads. The main arch is very elastic and a simple horizontal extension shows it easily, the pads mean good sound insulation (on paper), however the attachment of the ear cups to the arch shows a certain fragility, induced precisely by this desire not to be removable – we will come back to this.

In addition, and this will only be a point of detail for many, the helmet does not offer any fallback capability (which was available on the Platinum). The buttons are all grouped together on a single ear piece, like others before him, except that they offer very little intermediate space due to their multiplicity. Among these, you will indeed find the traditional volume keys (up / down), on/off headphones, Jack 3.5, volume chat versus gamebutton mute microphone (push button for once), a USB-C socket as well as a small new one, the “Monitor”, allowing to activate or not the return of his voice in-game.

On the design side, therefore, it is a rather well finished product which comes to sit with fitting the new committed theme next-gen from Sony, featuring curves, two-tone black and white, grip and systematic logo reminders. It nevertheless emerges a feeling of fragility on the atria and very (too) grouped buttons.

Unboxing completed, you will need little time to embark on a frenzied game with your helmet, since once the dongle USB connected, recognition will be immediate, the 3D option is also activated by default (because yes, it is an option, so you have the choice). However, you will have to navigate in the settings to be able to configure some additional audio options, which are not negligible. Indeed, you will find there in particular the in-depth adjustment of the 3D audio, with 5 types of configurations ranging from the highest to the lowest (note that step 4 presents a rather surprisingly unpleasant sound), and as a demonstration a river flowing from left to right.

Comfort in half-tone, rather good on the headphones, less on the rest of the structure

And this is already the first convincing proof of the contribution of technology Tempest 3D AudioTech, only available on Pulse 3D for the moment, because the distinct feeling in the left ear versus the right is real, with a feeling of continuous, precise flow. Once in play – with DiRT 5, Astro Playroom or Marvel’s Spider-Man: Miles Morales -, this first feeling is quickly reinforced. This translates to DiRT 5 by well-rendered 3D audio effects based on overshoots and shocks, sound effects (such as reward sounds for example), music in-game passing from ear to ear depending on the direction of the bends, it backfires and it sends surround. In Marvel’s Spider-Man: Miles Morales we have a real nuance between the dialogues and the background noises / background music, and this is explosive on certain effects, such as bioelectricity. As for Astro Playroom, let’s say that everything has been done to benefit from perfect 3D audio, especially with these innumerable sound effects that make the experience made by PlayStation even more enjoyable, and it is audible from the credits of the game (spearhead of the PS5 functionalities requires) and throughout thereafter. The rendering of sound spatialization is frankly excellent, and maybe even still under-exploited for the moment, and what about the double microphone – already present on the Platinum – which brings a perfectly clear sound to the hearing Party, without any crackling or parasite, it’s frankly great.

The sound bursts well in the ears on a medium volume, but the headphones lack sound insulation. The fault of the pads still too round and not vertical enough, and quite simply a design that did not want to favor passive insulation. How to realize it? Simple comparison made with a Focal Listen Wireless (same price range) on the head, with nothing more than a few “bla bla bla” spoken in a room, the difference is glaring and the voice is perfectly heard and clear with the 3D pulse, where it is barely audible with the Listen. Certainly, the helmet of Sony is also compatible with the PlayStation VR which favors the use of non-insulating audio accessories, but there is an aspect that is too quickly forgotten which will explain this choice of comparison: the PlayStation 5, unlike the PlayStation 4, is now a console that boasts of being multimedia (it does has the associated remote control)! Eh yes, Netflix, YouTube, Amazon prime, Spotify, Apple TV, myCanal, Disney+ and above all a Blu-ray player finally compatible with standard and 4K Blu-rays, just as many contributions which are supposed to make the PS5 an “all-in-one” platform for those who have opted for this model. And as such, the headset of the PlayStation 5 had to have this double half-game half-multimedia cap, it is clear that only the aspect gaming has been privileged, somewhat to the detriment of multimedia, it’s a bit of a shame and damaging.

The promises are weak in some aspects, evidenced by the lack of insulation, but really kept in what concerns everything else, it is frankly a very good surprise.

The curves of the PlayStation 5 declined in headphones, with its two-tone black and white skin. 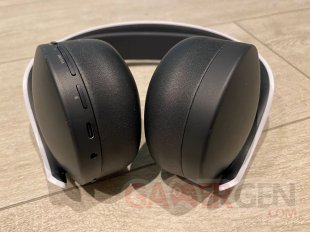 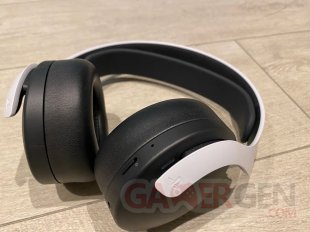 With a weight of 292 g, it stands between its predecessors the Gold (230 g) and Platinum (320 g) – like its price -, with a relative feeling of lightness when positioned on the head. The leatherette ear cushions, which appeared pleasant to the touch and very thick when unpacked, provide real comfort once in place on the ears, and allow you to experience long gaming sessions, both solo and multiplayer. As for the accessibility of the buttons, the first visual impressions are very quickly confirmed. If the push button on the Mute is really smart, because it allows you to easily know if your microphone is active or not in the middle of a multi game, the fact of having so many keys on the same slice quickly annoys, by necessarily by their welcome multiplicity, but by the little spacing between them : “I change the chat volume versus game, oh no, that was the volume, I turn off the headphones, oh no, that’s the Monitor …”. In short, you will need to establish mnemonic cues to remind you of the positioning of such and such a cursor, a matter of habit, let’s say.

On the other hand, two notable points mar the comfort of this helmet. If it takes the rubber hoop from the Platinum, this is not the best aspect. Certainly, the head support is less tight and does not compress the head thanks to this proven trick, but the helmet also slips in return. How to realize it? Take it Gold (or the Focal Listen Wireless previously used for the insulation comparison), and briefly tilt your head forward or backward (as if you were in a recliner sofa), it will not budge one iota, do the same with the 3D pulse, and it will slide smoothly back and forth, periodically requiring you to reposition it. And it’s not the lack of height adjustment that will allow you to compensate for it. If the Gold and the Platinum benefited (just like the Listen from Focal), allowing you to adjust its height as close as possible to your head size and tightening desire, it is simply absent on this model 3D pulse. In short, a subdued comfort, rather good on the headphones, much less on the rest of the structure.

Finally, a point on autonomy. We are promised 12 hours of post-charge headphone life, it will be more like 9 hours after our first tests – it’s too little – although it should be noted a faster charge, taking advantage of USB-C. 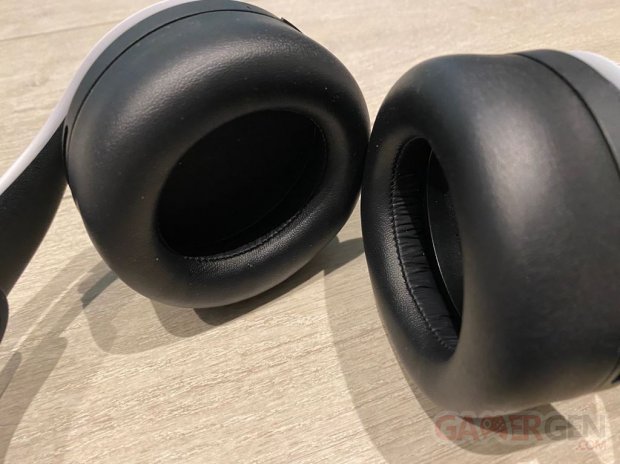 Despite its two large generous bumpers, the comfort is not complete 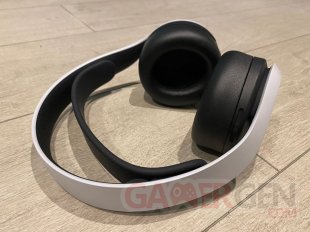 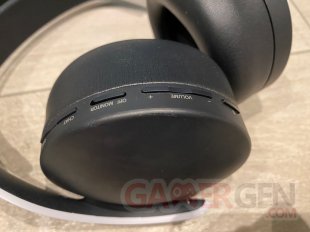 Taking advantage of a design perfectly aligned with the new PlayStation 5 charter, this 3D pulse brings a real and excellent rendering of audio spatialization, directly appreciable in game, even if still somewhat under-exploited. For this, it is the figurehead of the technological advances in sound brought by the PS5. On the other hand, it suffers from a lack of sound insulation, which confines it to a very good “gaming” headset, but in no way borrowing from the segment of multifunction headsets making it possible to meet the multimedia needs inherent in this console.

In addition, if the comfort of the ear cups is notable, their lack of height adjustment and the sliding of the rubber hoop on the head affect the overall comfort of this helmet, as well as the arrangement of the buttons. It is nonetheless a very good mid-range headset for the PS5., offering a decent quality-price ratio (99 € as a reminder), but which, beyond rather excellent 3D audio effects, will not necessarily revolutionize the genre – which may be offered by a possible “Pulse 3D Platinum ”?

While waiting for the helmet 3D pulse be restocked in your favorite physical and online stores, you can acquire the DualSense from Sony for € 69.99 at the Fnac.