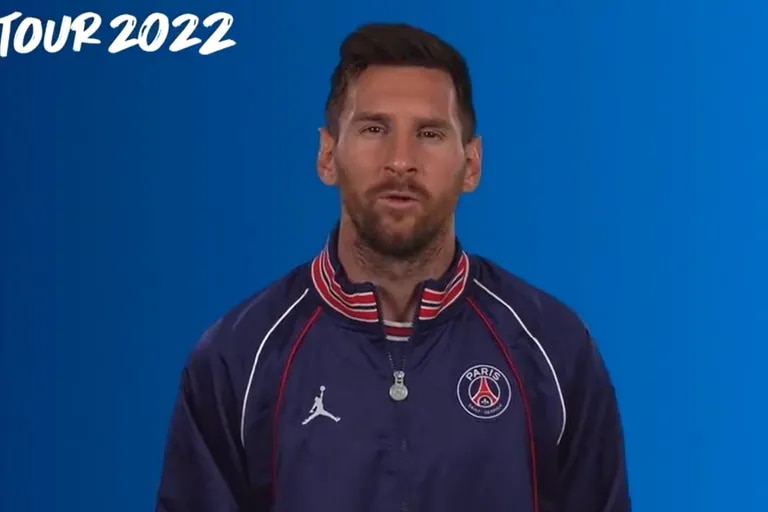 Paris Saint-Germain (PSG) shared a video on their social networks promoting a tour that the team will do in July in Japan. In the images appear Kylian Mbappe, Lionel Messi and Neymar who transmit the good news to the fanatical fans in the country of the Asian continent.

There’s a detail of the argentinian star in the video that caught the attention of users, especially all of the Argentines, who came out to support and defend him.

In the clip that lasts less than a minute, the soccer players of the Parisian team invite the fans of the club from that country to be attentive because in the coming months the campus will be in that place for several days in the middle of a tour of the 2022 preseason. For that, the footballers slipped, there will be a round of matches that will serve as preparation for what is to come in the 2022/23 season.

“We leave you a special video of MbappeMessi and Neymar for everyone in Japan”, They wrote in the language of that country from the official PSG account on Twitter. In the first instance, the French striker appears, safely presenting himself before the cameras and doing it in Japanese. Followed launches a message in English. “We will be visiting Japan in July”, tells the striker and idol of the fans of the team led by Mauricio Pochettino.

A few seconds later the Brazilian appears, and the only thing he tells in Spanish is a “hola”. “Neymar Jr. speaking. For all the fanatical fans of Japan, thank you very much for your support”he adds in English and Japanese and says that this Asian country is one of his favorites.

To end, Messi appears to give a similar message, but he does it entirely in his mother tongue: Argentine. “Thank you Japan for all your support. We will do a tour in Japan in July. We have three games against Japanese league teams. We’re going to do our best. See you in Japan”, says the man from Rosario with complete confidence.

Rosario’s decision not to speak in English or Japanese in the promotional video was celebrated and criticized by fans of the footballer and PSG on social media. Although there were those who indicated that it was not necessary for him to speak in a language other than his own, since he is an internationally renowned footballer, there were those who pointed out that he had to do the same as his teammates.

“Leo did it again”; “The one who is the best in the world speaks in the language that is sung to him…”; “He did it again”; “Messi is very crazy. I’m crying”; “Messi does not force anything, he feels comfortable with the subtitles”; “I want to be like Messi and never complicate it”; “I love you Messi, he said it in Spanish”, were just some of the comments made by fans on social networks.

In its official page, PSG indicates that the players will travel during the European summer to prepare for the 2022/23 season and meet their fans. In that sense, they indicated that the official announcement was made in Tokyo last Thursday morning during a press conference offered by the general director of PSG Sebastien Wasels, former club legend and J-League player Patrick Mboma, and Kazuyoshi Miura, who was appointed as the ambassador of the tour.

The three games that the team led by Pochettino would have planned to play would be against Kawasaki Frontale at the National Stadium, Tokyo, on July 20. Often they will do it against him Urawa Reds Diamonds in the Saitama Stadium, in Saitama, on July 23. To close the tour they will face Gamba Osaka at Panasonic Stadium Suita, in the city of Osaka on July 25.

On the other hand, The club indicated that training sessions open to the public will be held during the tour at the Prince Chichibu Memorial Rugby Ground in Tokyo and J Green Sakai in Osaka, where fans can get up close to watch the players get ready.

Donald Trump justifies arming citizens in the face of “evil”