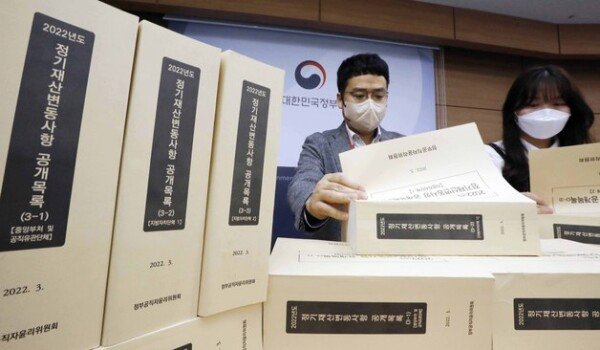 Despite the spread of the novel coronavirus infection (COVID-19) last year, it was found that the wealth of high-ranking government officials increased by an average of 160 million won compared to the previous year. As the value of assets such as real estate and stocks soared, so did public officials’ wealth.

It is the last regular property disclosure of the Moon Jae-in administration, and although the current government has emphasized the principle of ‘one house for high-ranking officials’ throughout his tenure, some ministerial-level figures still appear to be multi-family dwellers.

○ Increase in assets of the Minister of Justice by 23.1 billion won

The Government Official Ethics Committee published the ‘Regular Property Change Report Details’ for 1978 high-ranking public officials through the Official Gazette at 00:00 on the 31st. Subjects include △political positions belonging to the administrative department, △heads of public service-related organizations, △heads of metropolitan/basic local governments, △members of metropolitan councils, and △ superintendent of education in cities and provinces.

According to the report, the average wealth of high-ranking public officials was 1.621.45 million won, an increase of 166.29 million won (11.4%) from the previous year. 1,641 people (83%) increased their wealth compared to last year, and 337 people (17%) decreased. An official from the Ministry of Personnel Management explained, “More than half (57.3%) of the increase was due to the increase in the public housing price and the increase in the stock price index.” This means that as the price of the asset rises, the wealth increases.

The public official who reported the most property was Lee Kang-seop, the head of the Legislative Office, who reported 35,066.7 million won. The increase in wealth was also the largest, increasing by more than 23.1 billion won from a year ago. The increase in securities was close to 23 billion won, but an official from the Ministry of Legislation explained, “The valuation of the unlisted company owned by the person and his/her spouse has increased significantly, leading to an increase in the valuation.”

The current government has announced a policy of ‘exclusion of multi-family dwellers when hiring high-ranking public officials’. However, as a result of the Dong-A Ilbo survey of 112 ministerial-level personnel from 59 agencies, including major government ministries, offices, and committees, it was found that some (9 people, 8%) of multi-homeowners (including officetels) still remained.

○ The average wealth of senior judges is KRW 3.8 billion

On the same day, the Supreme Court’s Public Service Ethics Committee also disclosed the assets of 144 judges at the senior judge level and above of the High Court, and their wealth averaged 3.814 billion won. Chief Justice Kim Myung-soo’s wealth increased by 431.4 million won (36.6%) from the previous year to 1.610.2 billion won. The Supreme Court explained, “The wealth increased due to salary savings and house price fluctuations.” The Constitutional Court said that the average wealth of 14 people subject to property disclosure was 2.794.66 million won.