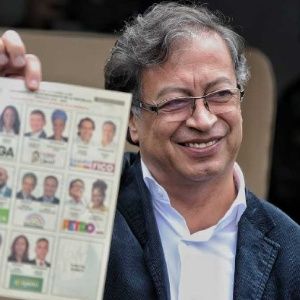 The Puebla Group welcomed Gustavo Petro’s victory in the first round on Monday in the presidential elections in Colombia, a country that will hold the ballot between the Historic Pact candidate and the independent candidate Rodolfo Hernández next June.

Gustavo Petro: We are committed to a change towards peace that destroys violence

In a statement entitled “Long live Colombia: the one that begins to live tasty from today”, the Latin American entity described Petro’s triumph as an expression of “the hopes of change of Colombian progressivism”, with which “all the excluded are recognized “.

The articulation of former Latin American and Caribbean presidents and politicians celebrated “the democratic spirit and the civic and peaceful will expressed in the electoral day held” on Sunday, in particular “for their levels of participation.”

�� VIVA COLOMBIA: THE ONE THAT STARTS TO LIVE TASTY FROM TODAY

The Puebla Group salutes the democratic spirit and the civic and peaceful will expressed in the election day held today: unprecedented due to its levels of participation.
https://t.co/J7JIt6GCt2


In particular, the note celebrates “the enormous work of young people who dream of a new Colombia where all the excluded are recognized” in the “large first majority of Gustavo Petro and Francia Márquez representing the Historical Pact.”

In this sense, they ask for “a clear mandate to those majorities in the second round elections, in order to build a fair, democratic and peaceful Colombia”, since “the victory of Gustavo Petro fills Latin America with hope where new airs of dialogue, social equality and integration have begun to breathe”.

Today the change won and the Colombian political establishment lost. Now the citizens will choose between the emotional change of Rodolfo Hernández or the real change offered by Gustavo Petro in terms of peace, social justice, environmental transition and regional integration.


A week ago, the Puebla Group had spoken out about the course of the presidential elections in Colombia, “due to the evident lack of guarantees on the part of the government of President Iván Duque”, whose party (Centro Democrático, now defeated) asked refrain from “continuing to question the legitimacy of the electoral power made up of the National Electoral Council and the National Registrar in order to destabilize the elections.”

The former Colombian president, Ernesto Samper, a member of the Puebla Group, said after the results of the elections “today the change won and the Colombian political establishment lost. Now the citizens will choose between the emotional change of Rodolfo Hernández or the real change that he offers them.” Gustavo Petro on peace, social justice, environmental transition and regional integration”.

On Sunday, Gustavo Petro reached 40 percent of the votes (a little over eight million votes) with which he goes first to the ballot for the presidential elections which will take place on June 19 and in which he will face former mayor of Bucaramanga, Rodolfo Hernández.