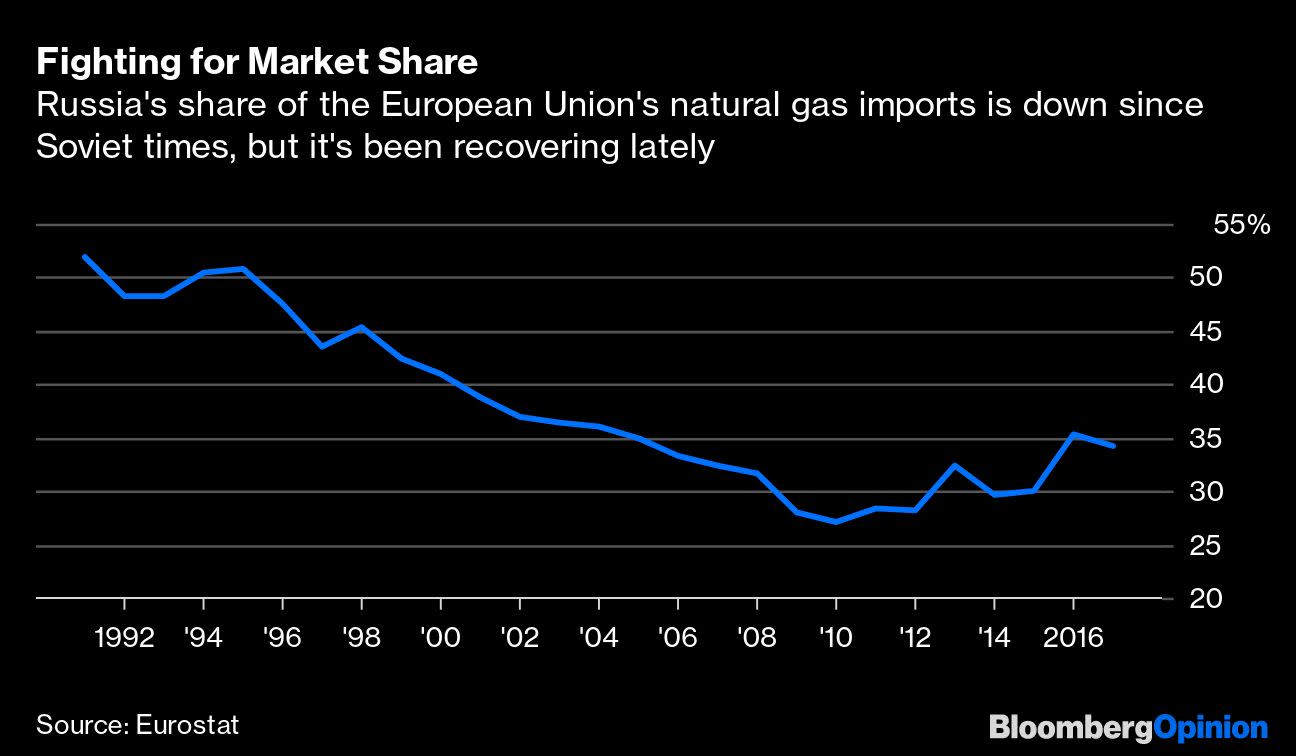 (Bloomberg Opinion) – Within a few significant weeks, one of Russian President Vladimir Putin's most ambitious projects was launched – a Russian natural gas export system that is in line with the new geopolitical reality rather than the Cold War era. This will likely continue until the end of Russia's position as a top energy exporter without major changes.

Completion of the project, which began in 2001 with the construction of the Blue Stream pipeline to Turkey, includes the start of the Power of Siberia pipeline to China on December 2, the US sanctions for the Nord Stream 2 pipeline to Germany last week. A new gas transit contract with Ukraine and the commissioning of the TurkStream pipeline are planned for January.

External pressure and market conditions have helped shape the new Russian gas export system so that it can't really be used as a sinister tool for Putin's villainous foreign policy. In the meantime, it is structured so that Russia can continue to hold its energy market share after Putin and use it as the basis for useful trading partnerships. That makes it a positive part of Putin's legacy, if not just thanks to Putin.

Russia has inherited contracts from the Soviet Union to supply natural gas to Europe, one of the largest sources of foreign currency for Russia's fluctuating post-communist economy. But the Soviet pipelines were laid through Ukraine and Belarus, which were part of the empire. However, they became independent nations demanding transit fees and low-cost energy supplies to secure Russia's energy supply to Europe or the formerly communist part of Russia, where Russia and all that resulted have recently become unpopular.

At the same time, gas suppliers in Central Asia and Azerbaijan posed a competitive threat: it was relatively easy for them to deliver gas to Turkey in order to deliver it to Europe.

In the 2000s, when Putin and his advisors fostered the notion of Russia as an "energy superpower", the Kremlin strategists realized that they needed more flexibility to increase supply and gain more economic influence on their neighbors in Europe and Asia. Blue Stream, which led across the bottom of the Black Sea to the Turkish port of Samsun and opened in 2003, was the start of the Putin gas game.

However, Blue Stream's capacity of 16 billion cubic meters of natural gas a year has been overshadowed by the approximately 180 billion cubic meters that the Soviet Union-built pipelines could export to Europe via Ukraine and Belarus. It helped Russia survive in Turkey but did not solve the bigger problem of Russia's dependence on Ukraine and Belarus. The share of European natural gas imports from Russia continued to decline.

In 2011, Russia gained full control over the Belarusian gas transit system in exchange for discounted gas supplies. However, Ukraine remained in control of its pipelines, which accounted for the lion's share of Russian export capacity.

Putin wanted more direct access to southern and western Europe. He wanted to be able to bypass Ukraine for economic and political reasons. The Ukrainian pipeline system operated by National JSC Naftogaz Ukraine fell into disrepair and Gazprom, the Russian export monopoly for pipeline gas, feared that it would have to invest in the repair without having a major impact on its operations. At the same time, Putin wanted to put the Ukrainian government into Moscow's orbit. Twice in the 2000s, Russia cut gas supplies to Ukraine to try to get them under control, but without alternative export routes such tactics were unsustainable.

With the opening of the Nord Stream, which stretched across the Baltic Sea to northern Germany, Russia took another important step in 2012. With a capacity of 55 billion cubic meters per year, it increased Russia's share of European imports. At the same time, Russia was planning a large pipeline to Southern Europe, South Stream, over the Black Sea to Bulgaria. From there it would branch to Greece, Italy, Serbia and further to Central Europe.

The annexation of the Crimea in 2014 made it inevitable for Putin to redraw the gas export card. Now Ukraine was not just an uncomfortable partner, but an opponent, and bypassing it became a geopolitical necessity for Putin. Europe, too, was more concerned than ever about increasing gas exports from Russia, which it could use to expand its political influence. The European Union prevailed against South Stream in late 2014 and put Bulgaria under pressure. The plans to expand Nord Stream by laying two parallel strings of pipe known as Nord Stream 2 also became politically toxic, particularly given the U.S. opposition to this project: In Washington, fears of increased Russian leverage against Germany were raised increased the desire to deliver more US liquefied natural gas to Europe.

Art of the possible

The way Russia has changed its gas export plans in the past five years reflects a significant change in its geopolitical thinking. Putin's anti-western partnerships with major authoritarian regimes – those of Turkish President Recep Tayyip Erdogan and Chinese President Xi Jinping – had to be secured with gas pipelines. At the same time, Putin wanted to maintain a lifeline to Germany with his regime-agnostic Ostpolitik; Putin, a German spokesman and former Soviet secret service agent in East Germany, initially sees the relationship between Russia and Europe as one with Germany, even though Chancellor Angela Merkel is one of the least Putin-friendly leaders on the continent.

South Stream mutated into TurkStream, a pipeline with a planned capacity of 31.5 billion cubic meters, which leads to western Turkey and from which gas will flow to the Balkans. It was filled with gas for the first time in late November, and Putin and Erdogan plan to open it on January 8th.

The pipeline to China, Power of Siberia, which is expected to supply 38 billion cubic meters of gas annually by 2024, was opened earlier this month, with Putin and Xi watching on video. It comes from the Gazprom deposits in Eastern Siberia and is too far away from Europe for deliveries to make economic sense.

At the same time, Russia has built up strong competition with suppliers from the USA and the Middle East in the new and rapidly growing European market for liquefied natural gas. Novatek PJSC, a private company in which Gazprom and French total SA hold a minority stake, exported from its huge LNG facility on the Yamal Peninsula in 2018 and approved an investment of $ 21 billion this year into a second LNG plant. (Gazprom and Rosneft, another state-owned company, have their own LNG capacities, but these are mainly intended for export to Asian markets.) In the third quarter of 2019, Russia was the EU's second largest LNG supplier after 15% of Qatar , The USA came fourth with 12% – although data from the US Energy Information Administration show that the US has recently overtaken Russia.

All of these developments make it almost inevitable that Russian natural gas exports will continue to grow as capacity reserves continue to shrink.

Although ships that lay pipes for Nord Stream 2 and their owners have been sanctioned by the United States and Swiss contractor Allseas has stopped working on the project so as not to embarrass the United States government, this pipeline is also being completed. Gazprom and one of its Russian contract partners have their own lay ships. The federal government's coordinator for transatlantic issues, Peter Beyer, said in a radio interview on Monday that the government expected Nord Stream 2 to be operational in the second half of 2020.

The delay has forced Russia to do better business with Ukraine than it could have negotiated if there had been no Nord Stream 2 sanctions. To replace the transit contract, which expires at the end of this year, Russia tried to sign an extension of only one year. Ukraine and the EU, which brokered the talks, were fighting for a 10-year contract that provided for a minimum amount of gasoline that Gazprom would pump every year. Ukraine receives approximately $ 3 billion in transit fees annually from Gazprom, and without these funds a large hole in its budget would develop.

Both sides compromised on outstanding legal disputes resulting from the two countries' previous turbulent relationships as partners in the natural gas business. Gazprom agreed to pay Naftogaz the $ 3 billion it had won in arbitration, and Naftogaz agreed to drop another $ 8 billion lawsuit and refrain from filing any more.

Other compromises may also have been reached. Ukraine has reported that Russia could resume direct gas supplies for Ukraine's own needs – which was unthinkable under the government of former Ukrainian President Petro Poroshenko when Ukraine bought Russian gas in the EU rather than with the intruder of the Crimea To finish. Russia denies that direct deliveries are part of the agreement, but Ukraine's current president, Volodymyr Zelenskiy, is more pragmatic than Poroshenko and is keen to end the armed conflict that Russia has instigated in the eastern regions of Ukraine. The new gas agreement, described by the EU official who brokered it as a win-win solution for both sides, shows that Putin, with his foreign policy transaction approach, appreciates Zelensky's willingness to negotiate and compromise.

As a result, Ukraine will remain an important pillar of the new Russian gas export system, at least for the next five years. Although Putin initially did not want this and made every effort to set up corresponding gas supply channels, the resulting export system in Russia is remarkably balanced. It connects Russia with China, Turkey, southern, northern and eastern Europe. All of these markets are competitive, particularly in Europe, where the EU has followed through on Gazprom's previous attempts to set monopoly prices.

Putin may have implemented and changed its plans for export channels in the hope of geopolitical leverage. This – and the large infrastructure contracts for Kremlin buddies associated with the pipeline construction – have helped justify the tens of billions of dollars invested in pipeline and LNG projects. Gazprom's investments have averaged $ 6.4 billion per quarter over the past five years, which is approximately 23% of average quarterly sales over the same period. The company has remained consistently profitable, but has more than doubled its debt burden since 2013, while sales are expected to increase 40% this year compared to 2014.

Since the infrastructure is largely in place and the supplies required for supply are either online or going online in the near future, the marginal cost of exporting gas will be relatively low and Russia will be guaranteed a solid source of income for export in a short period of time. changing global gas market. This is important for a country that exported $ 49.1 billion in natural gas in 2018 and contributed around 7% of its household revenue from the gas industry.

Of course, the Russian export partners will eventually forego fossil fuels. However, this will not happen shortly since both Europe and China will need more gas as they replace coal. Russia is expected to account for around a third of the EU's natural gas supply by at least 2040.

By then, Putin will have disappeared, but Russian energy trading will be more diverse than when it came to power. Benevolent Russian governments will be able to use it as the basis for good neighborly relations and not as a pressure tool. The results of Putin's great project show how several actors – Putin, the ambitious authoritarian, his situation-based allies like Erdogan and Xi, his opponents like the USA, his hesitant partners like the EU and his victims like Ukraine – can combine their efforts something worthwhile.

To contact the author of this story: Leonid Bershidsky at lbershidsky@bloomberg.net

To contact the editor responsible for this story: Robert Burgess at bburgess@bloomberg.net

This column does not necessarily reflect the opinion of the editors or Bloomberg LP and their owners.

Leonid Bershidsky is the European columnist for Bloomberg Opinion. He was the founding editor of the Russian business newspaper Vedomosti and founded the opinion website Slon.ru.

You can find more articles of this kind at bloomberg.com/opinion