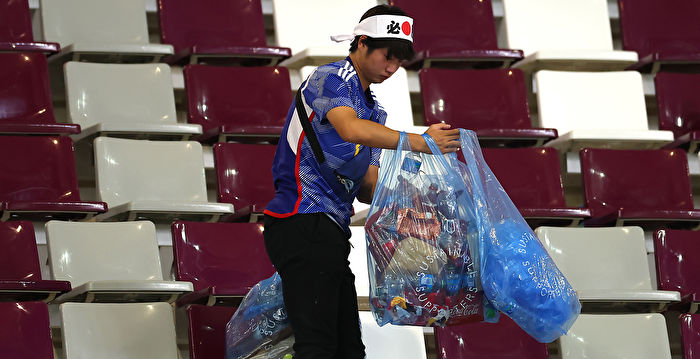 [The Epoch Times, November 24, 2022](Reported by Epoch Times reporter Chen Juncun) The 2022 FIFA World Cup is being held in Qatar (or translated into Qatar). Sharp-eyed people discovered thatJapanfanAfter the opening game, take the initiative to play on the courtstandsclean upRubbishsurprisingly.

The 22nd FIFA World Cup officially debuted in Qatar on November 20. In the first opening game, the landlord team Qatar faced Ecuador, attracting a large number of spectators. But Qatar lost 2 goals in a row in the first half, and finally lost the game 0-2.

despite the pitchstandsand the aisles are everywhereRubbishbut eyewitnesses found that a group ofJapanfanAfter the game, take the trash bag and clean up the trash on site.

Producer and internet celebrity Omar Farooq from Bahrain captured the group of fans wearing Japanese jerseys, costumes or national flags picking up litter in the stands and shared it on Instagram.

(clickhereYou can see this screen)

Farook said: “Someone convinced me that this is a normal situation. These Japanese fans decided to clean up the stands. It’s not even their game!”

“When I asked them: ‘Why are you clearing things that have nothing to do with you?’ one replied: ‘The Japanese don’t leave their trash. We respect this place.'” he said.

This cleanliness seems to be reflected in Japanese culture, where fans have previously cleaned up trash at events such as the last World Cup.

According to the British Broadcasting Corporation (BBC), on June 19, 2018, Japan defeated Colombia 2-1 and became the first Asian team to defeat a South American team in the World Cup. After the game, Japanese fans also picked up trash in the stands with the trash bags they brought.

(clickhereYou can watch the related video)

He said: “You often hear people say that football reflects culture. A big point in Japanese society is to make sure everything is tidy. This is true in all competitions, and certainly in football.”

[건강톡톡] Every night without my knowledge, ‘mistake in drawing a map on a blanket’… Why is that?