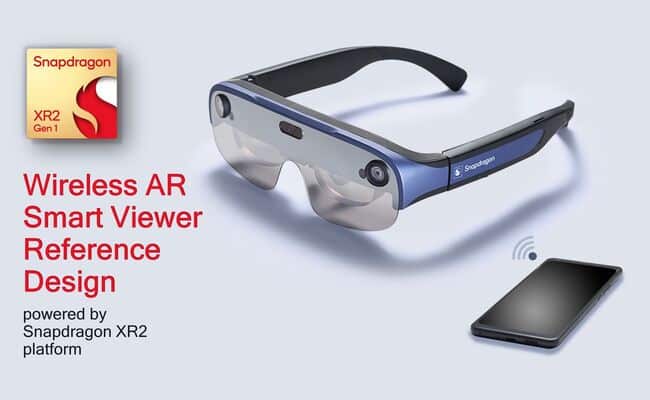 Qualcomm has demonstrated a wireless version of its augmented reality glasses called the Smart Viewer, a reference design that manufacturers can adapt to commercial headsets.

These new glasses come as an update to the design of the older smart glasses from Qualcomm. It includes a more powerful processor, as well as a tethering system that uses Wi-Fi 6/6E and Bluetooth instead of a USB-C cable

But the battery life is likely to be very short, though the company says consumer versions may be designed differently.

And the new Smart Viewer was developed by the Chinese company Goertek. The glasses are currently available to a few manufacturing partners with plans to expand reach in the coming months

Like its predecessor, it connects to a phone or computer and offers mixed reality experiences with full head and hand tracking, using tracking cameras powered by Micro OLED screens.

Qualcomm maintained the previous resolution of 1920 1080 pixels and a refresh rate of 90 Hz. But it reduced the field of view slightly, lowering it from 45° to 40° diagonally

The Wireless Smart Viewer has a slimmer appearance than the wired Smart Viewer or most competitors. Its frames are 15.6mm in depth, compared to about 25mm for the wired version, easing the typical look of AR glasses.

This design, which uses free-form optics, can be difficult to achieve with a wider field of view

The glasses weigh 115 grams, much less than the 503 grams of the Meta Quest 2 VR headset.

The company says that…

ON VIDEO | Damage from the air

My father is battling… ‘DP’ Hyun-cheol Jo, the sad news was delivered today (the 22nd)