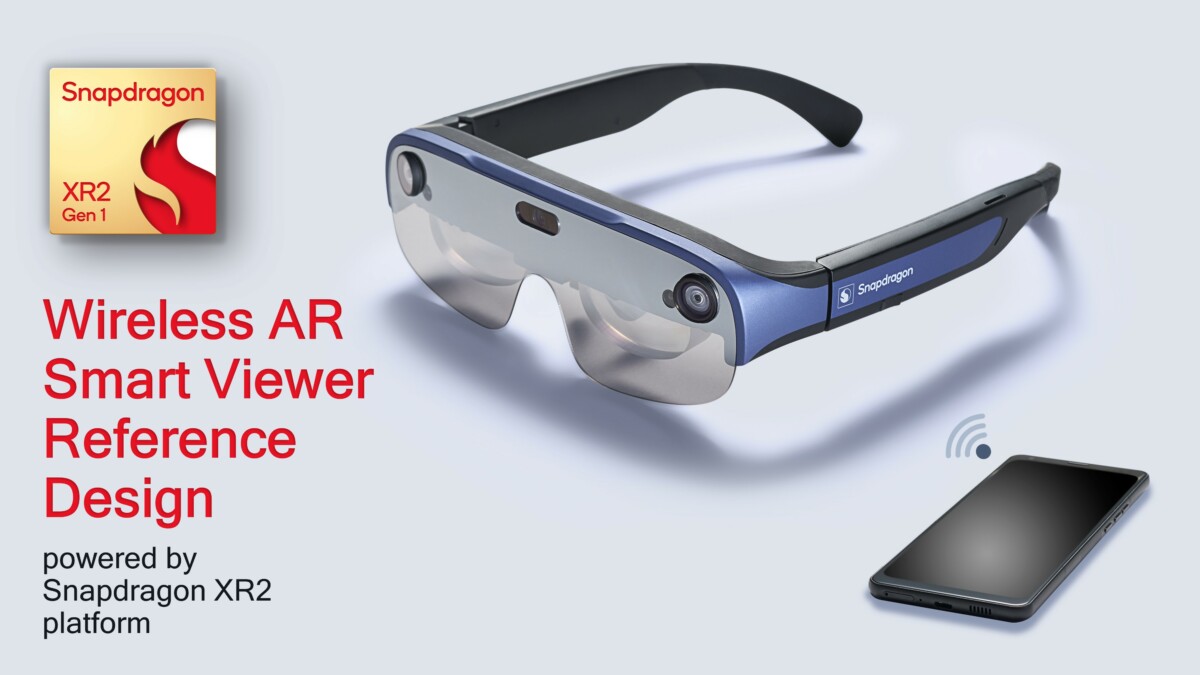 After the announcements of two new SoCs, Qualcomm presents a new platform for the development of augmented reality glasses with an associated chip: the Snapdragon XR2 Gen 1.

Qualcomm announces the evolution of its chips dedicated to augmented reality (AR): This is the Snapdragon XR2 Gen 1 chip. Gen 1 is added, with obviously improved performance. This chip mostly comes with a “ reference design of glasses designed to be sold to brands that will market them to the end public.

The manufacturer’s ambition, within one to four years, is to connect virtual reality headsets and augmented reality glasses in 5G with vision devices (glasses, smartphones, computers) while Microsoft would have canceled the development of its HoloLens 3.

In its press release, Qualcomm therefore unveils a new reference model of augmented reality glasses, called AR Smart Viewer Reference Design, with the particularity of operating without any wires. A reference design, it’s kind of a pattern ready to be copied. The glasses are actually intended for manufacturers so that they create their own models for the end audiences.

Qualcomm states that “cThis wireless reference design enables OEMs and ODMs to prototype and bring to market premium, lightweight AR glasses to enable immersive experiences that open up the metaverse “. Augmented reality binoculars already exist, such as the HTC Vive Flow that we had taken over.

Developed by Goertek, the hardware of the XR2 reference model is 40% thinner and is said to have better weight distribution for more comfort. On the screen side, SeeYA provides a ” dual micro-OLED binocular displays enabling 1920 x 1080 resolution per eye and frame rates up to 90Hz, plus motion blur to deliver a seamless augmented reality experience “. We also know that ” the Smart Viewer’s dual monochrome cameras and RGB camera enable six degrees of freedom (6DoF) head tracking and hand tracking with gesture recognition for AR precision “. The weight is 115 grams and the battery capacity is 650 mAh: Qualcomm has not announced autonomy for its model.

Qualcomm highlights that its new wireless reference model is actually lighter and thinner than the wired predecessor.

Qualcomm announces that ” reference design enables wireless shared processing architecture to distribute computing workloads between smartphone and AR glasses “. The wireless connection offers a latency of less than 3 ms thanks to a new Wifi chip.

To guarantee a stable and efficient connection between a device and the AR glasses, Qualcomm proposes to use the Qualcomm FastConnect 6900 chip. It allows you to connect to WiFi 6 devices, with a frequency band that goes up to 6 GHz. Qualcomm is launching a software suite named FastConnect XR to improve latency, reduce interference, but also have low power operation to improve the autonomy of the glasses.

These wireless augmented reality glasses are available for select Qualcomm partners and should be available on a wider scale in the coming months. Qualcomm has also just announced its Snapdragon 7 Gen 1 and his Snapdragon 8+ Gen 1, SoCs dedicated to smartphones. For several years, many manufacturers have been developing augmented reality glasses like Samsung or evenApplebut nothing official yet.

No to a rate hike