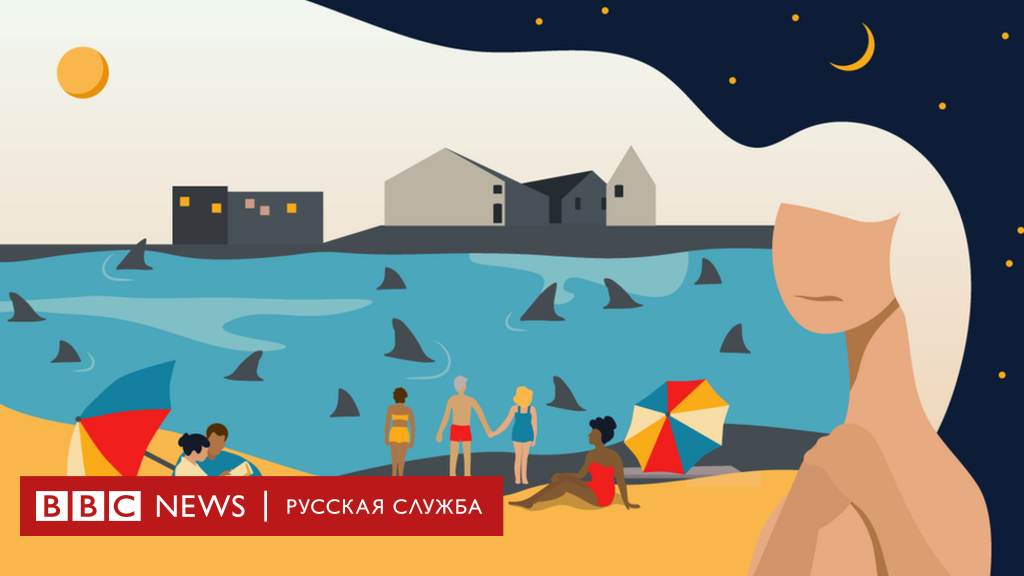 When a pandemic swept the world last year, there were reports of striking vivid dreams that people began to see. The rapidly changing world has plunged humanity into stress – and this is reflected in dreams. Now that we are all accustomed to the new reality, have our dreams changed? What do people see when they go to bed?

Here are some descriptions of dreams that have been sent to us by the BBC readers.

“I walk along the beach, and the sea is teeming with sharks. And I walk and wonder why people do not maintain social distance,” says Fiona Remedge from the Scottish city of Dundee. She admits that now she constantly dreams of a pandemic, and these dreams are sometimes accompanied by the fear of coughing.

Sayaka, who moved to the UK from Japan with her family, says her seven-year-old daughter “sits at home all the time” in her dreams, and her parents “wear masks and wash their hands all the time.”

Mariela Cortez, from Santiago, Chile, says her dreams took a more surreal turn. “I get angry when I see that animals – cats and dogs – don’t wear masks, even though they should,” she laughs.

We have received from readers only a few examples of what dreams can be during a pandemic, but scientists have been studying this issue for several months. Deirdre Barrett, a psychologist at Harvard Medical School in the United States, asked about 15 thousand people to tell about their dreams, two or three respondents were women and one third were men.

As a result of these conversations, she wrote the book “Pandemic Dreams”. The psychologist says that many people during the first wave of coronavirus had dreams about them suffocating or insects get in their nose and they cannot breathe. The second major fear was associated with imprisonment or having to unexpectedly pass a math exam. Most likely, this was the expression of the need for isolation and home schooling of children.

However, about six months after the start of the pandemic, Dr. Barrett noticed a significant increase in the number of people who say that they forgot to wear a mask in their dreams or see other people who do not wear masks in public.

Dr. Barrett suggests that the original dreams, which usually expressed fear of contracting the virus, have been replaced by dreams where people are anxious about adhering to new social norms. “Often, the main theme of dreams becomes:” Oh my God, I forgot the mask. “People are afraid to embarrass themselves in front of everyone and want to leave quickly before someone notices their mistake,” says the doctor.

Several readers have told us about these fears.

“I ended up in some place where there are a lot of people, perhaps in a shopping center. Then I suddenly realize that I do not have a mask – and no one around me is wearing masks either. I am afraid that it is dangerous here, and I see that all people are too close to me. I start to panic, “says Diletta de Cristofarro from the British city of Nottingham.

Naomi Harvey from Cambridgeshire recalls how she hugged her nephew in her sleep, and then other family members approached them. This was before the relaxation of social distancing rules in the UK. “I woke up feeling guilty and fearful for breaking the rules and putting my family at risk of infection,” says Naomi.

And Diana Valk from London admits that in a dream she mistakenly hugged a strange woman, mistaking her for a friend. “The man was terrified because he was afraid of contracting the coronavirus, and we were both without masks. After this dream, I felt very ashamed, because I hugged a woman in front of everyone – and she was very embarrassed,” says Diana …

Dreams of the future

Valdas Noreika, professor of psychology at Queen Mary University of London, explains that there is a complex connection between waking and sleeping minds. “Some aspects of our life intersect in sleep and wakefulness, but we almost never dream of some moments from our everyday life, for example, how we surf the Internet,” says Valdas Noreika.

He and his colleagues are also collecting dream diaries for scholarly work on whether life in the pandemic affected the content of dreams. “Usually things that cause strong emotions are reflected in our dreams, – says Valdsas Noreika. – It is likely that people who are afraid of getting sick during a pandemic will see similar nightmares for many years to come. This is an interesting fact, but, of course, very sad “.

Can we assume that the pandemic has already become such a familiar part of our life that masks and social distancing will be present in dreams for granted?

Dr. Barrett says she has never seen a dream like this before. “But with dreams there is often a delay, we see in them the past and not always the present,” she explains. The expert believes that the peak of pandemic dreams is still ahead.

“I would not be surprised if in two or three years we will have dreams in which people go to a restaurant, and everyone is wearing masks. After waking up, such a person will understand that he dreamed about it because of a pandemic,” says Dr. Barrett.

One of the last themes in pandemic dreams is vaccines. “After the vaccination began, people began to see injections in their dreams. But as a rule, these dreams are nightmares. For example, someone comes to get the vaccine and sees that the syringe says cyanide,” says the psychologist.

She attributes this to a subconscious fear of injections rather than anti-vaccination moods. (There is no evidence that the Covid-19 vaccine is associated with a high risk of death.)

Research by Deirdre Barrett shows that more than 90% of pandemic dreams are now associated with negative emotions. But in recent months, a small number of people have reported good dreams in which they see life after the virus. “There are dreams in which nature is getting better – the sea is cleared, the garbage becomes less,” says Barrett. “Many people dream of unrealistically huge whales swimming near the shore. that whales have learned to fly and now soar in the sky. “

And for some people, throughout the pandemic, sleep was an area in which to distract from covid reality. “My dreams are probably the only thing that has remained unchanged in this difficult year. I have never dreamed of masked people who could not touch each other,” says Kiesa Kay from North Carolina, USA.