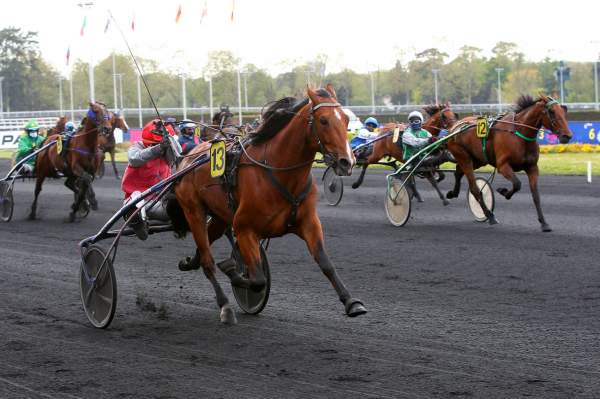 The Grand National du Trotting caravan stops in Laval on Wednesday. Second in the stage last played at Croisé-Laroche, FIRELLO (photo) presents itself there with legitimate claims.

3 FIRELLO : It is confirmed at this level, posting a victory and five places in eight quintées run. In addition, he has just finished 2nd in this circuit, at the end of May at Croisé-Laroche, where he dominated four of his rivals of the day. Presented with all four feet bare, it is one of the priority choices of the race.

2 CRACK MONEY : This 9-year-old was not spared from health problems. However, its quality is proven and it recommends three successes in eight quintés disputed, including that recorded in a stage of the GNT, that programmed at the end of April in Maure-de-Bretagne. It starts in the lead and promises to be formidable.

9 GOLDEN BRIDGE : He quickly unveiled the means, notably ranking 2nd in the 2019 edition of the Critérium des Jeunes. He has since won the coveted Prix de la Côte d’Azur (Gr.III) this winter at Cagnes-sur-Mer and has just finished 3rd in the Maure-de-Bretagne stage at the end of April. Good luck.

10 DECOLORATION : Seen to its advantage this winter at Vincennes, a period during which it scored four successes, it has since shone in this GNT 2021, by winning in the Marseillaise stage at the end of March. Despite its distance performance, it retains its say in securing a place.

13 DREAM THE WELDING : It has to be said that he is very efficient in the quintés, posting three wins and seven places in thirteen contested events. In addition, his two outings in Laval resulted in as many second places. What earn him logical supporters.

4 DREAMER DE CHENU : This resident of Jean-Michel Baudouin finds the course on which he imposed himself, on April 29. In addition, he will perform barefooted with all four feet and will benefit from the drive of the essential Eric Raffin. So many parameters that lead to confidence.

12 FRIC DU CHENE : If he has not passed the post as a winner since March 2020, he is relatively consistent. He also finished 3rd in the Prix de Sélection (Gr.I) at the beginning of March, before placing 5th in the Croisé-laroche stage at the end of May. Efficient flat track, it cannot be neglected.

7 BELLE EMOTION : Admittedly, this 10-year-old mare seems here blocked for success. However, it faces a favorable engagement at the limit of retreat and it is able to print its pace on the run. Therefore, it seems here in a position to maintain a good allocation. For fans of worthy outsiders.

In case of non-runner: The 14 CASH DU RIB

This sixth stage of the Grand National du Trot, the Tour de France des trotteurs, will take place on the Laval racecourse and a magnificent field is offered to us during this support race of the ZE5-Événement.
Currently evolving in full possession of his means as indicated by his music, Firello who will find Jean-Michel Bazire in his sulky, has many assets in his game and promises to be formidable. To hope to pass the post in the lead, this 6-year-old male will have to overcome Crack Money whose entourage made this event a goal in its own right, Dreamer de Chenu transformed since he joined the boxes of Jean-Michel Baudouin and Belle Emotion, prepared for this meeting, which should go far on this course. Dark Goddess is certainly better than its last outings indicate and if it trots from start to finish it can hit a big blow; mistrust ! Dream de Lasserie who faces his first goal of the summer on a track he enjoys, Golden Bridge which has regained some freshness for this race and Oak Money, able to finish quickly, will try to scramble the cards at the finish.

The GNT made a stopover in Laval on Wednesday. Second in this race in 2019, DREAM THE WELDING can do as well or better this year.

Find all the BetClic predictions for the day of Wednesday, June 9, 2021