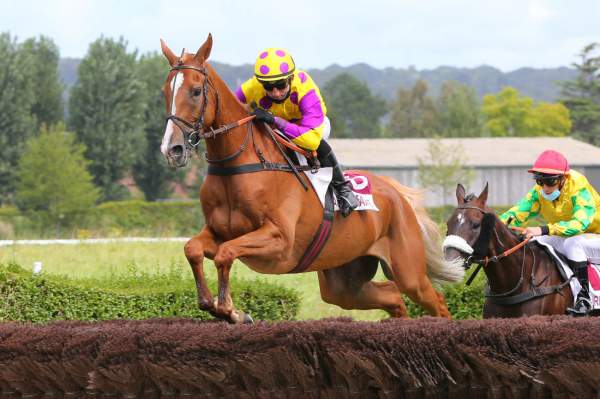 Quinté+ on Monday at Clairefontaine-Deauville with the Leopold d’Orsetti Prize, a divided handicap first steeplechase event (ref. +11), over 3900 meters, for entire horses, geldings and mares aged 5 and over who have raced since the January 1 of last year inclusive. The terrain is announced as very flexible (4.1) by France Galop. SAN PETRONE CORSO (our photo) has the potential to play a leading role.

6 SAN PETRONE CORSO : This 9-year-old gelding has 12 wins and 19 places in 39 races. And in thirteen steeplechase attempts, he has three victories, five first runners-up, a third place, two fourth places and a fifth place. Its form is sure as evidenced by its very easy victory of June 19 over the hurdles of Sables-d’Olonne. In 58.5 of value, this resident of François Nicolle deserves wide credit.

11 POULORIUS : Good handicap horse in the steeplechase, it remains on a second place in the Quinté+ of June 4th on the course of the 3700 meters of the steeplechase of Auteuil. This is a theoretical first chance.

10 PRAGELOR : After more than six months of absence, it ran well in the Quinté+ of June 4 mentioned above, ranking net third. Given his potential, if he has recovered well, he should also play a very good role.

13 MOTU FAREONE : Winner of 6 lengths of a race with well composed conditions on May 22 on the 4400 meter steeplechase course at Auteuil, this resident of David Cottin presents itself with an obvious chance in this event in value 54.

1 FILUP : This 7-year-old gelding, well known in handicaps of this kind over steeples, finished fourth in the reference Quinté+ of June 4 at Auteuil. With the regularity of a metronome, this quality jumper who appreciates flowing courses has his say despite his top-weight of 71.5 kilos.

4 CHOUAN : Good third on June 24 of the Grand Steeple-Chase of Dax, race under Class 2 conditions, this resident ofArnaud Chaillé-Chaillé seems competitive for a good ranking in this handicap in 59.5 value.

12 DERBY DETE : On June 20, in a race under Class 2 conditions on the 3900 meter steeplechase course at Clairefontaine-Deauville, this 9-year-old gelding failed by a head for victory. In 55.5 value, for his return to the handicaps, he has his say for a small place.

5 ANZORIE : During her last five outings, this 8-year-old mare has three steeplechase victories, at the racecourses of Dieppe, Strasbourg and Nîmes. Considering its form and its potential, it constitutes a good blow of madness.

In case of non-starter : 3 POLINUIT

Falling for something
13 – MOTU FAREONE

Niantic confirms that it has not forgotten about Kecleon, Zoroark and other Pokémon that are missing from Pokémon GO