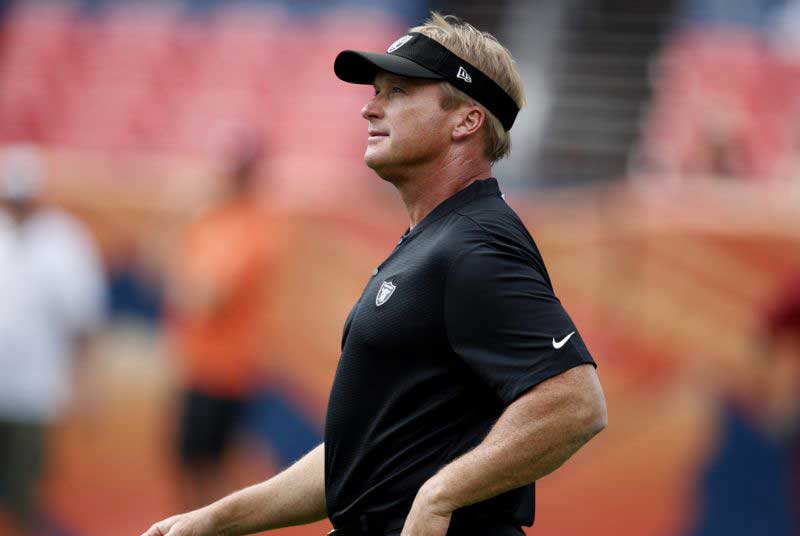 Pushed to the exit, the coach is no longer at the head of the Las Vegas franchise.

The first e-mail containing racist remarks was published on Friday. It didn’t take long for others to come out in the press. On Monday, new messages written in the early 2010s by Jon Gruden, ESPN consultant at the time of the incident, were published by The Wall Street Journal and the New York Times.

Once again we find racist insinuations, but also homophobic and misogynist.

Just two hours after the news appeared, Jon Gruden himself announced his resignation as head coach of the Raiders.

“I resigned as the coach of the Las Vegas Raiders. I love the Raiders and don’t want to be a distraction. Thank you to all the players, coaches, staff and supporters of the Raider Nation. I’m sorry, I never meant to hurt anyone. “

Mark Davis, the owner of the franchise, of course accepted this decision. Difficult to be otherwise in a league which aims to be irreproachable in the field.

According to the revelations of The Times, Gruden would have insulted Roger Goodell by using homophobic terms such as “fagot” (fagot, editor’s note) or “clueless anti football pussy. He would also have explained to Bruce Allen, president of the Redskins at the time and recipient of the emails, that Goodell should not, in his opinion, have pressured the Rams into drafting “queers”, in reference to Michael Sam. The trade spans 7 years, until 2018. Gruden also criticizes the league’s policy of trying to reduce concussions.

In another, he explains that Eric Reid, the safety who dropped the knee to the ground with Colin Kaepernick and after, should be fired. Barack Obama and Joe Biden also take it for their rank. The latter is also a “pussy.” “

More terrible still, Gruden and Allen reportedly exchanged photos of the Washington cheerleaders naked. It had been revealed that cheerleaders were forced to pose nude in 2013.

Gruden is also said to have blurted out about several franchise owners involved in negotiations during the 2011 lockout.

At 58, the coach is leaving his post after four seasons at the head of this team. As a reminder, Jon Gruden signed a 10-year contract in 2018.

For now, Rich Bisaccia, the special teams coach, has been appointed as interim coach. Las Vegas must now reorganize quickly so as not to spoil this good start to the season. It is in any case a thunderclap in the world of the NFL.

“I have resigned as Head Coach of the Las Vegas Raiders. I love the Raiders and do not want to be a distraction. Thank you to all the players, coaches, staff, and fans of Raider Nation. I’m sorry, I never meant to hurt anyone.”