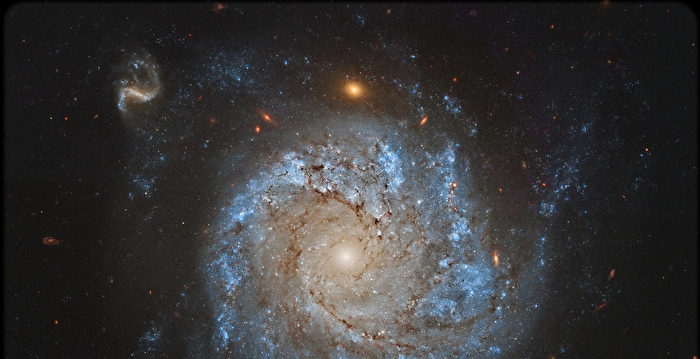 [Epoch Times June 29, 2022](Epoch Times reporter Xia Yu comprehensive report) Astronomers have observed a star in a relatively close galaxy, and this star is not only insupernova explosionRarely survived and became brighter than before the explosion, this dead star (zombie starZombie Stars) surprised scientists.

The Hubble Space Telescope has observed that the controversial star is awhite dwarf. White dwarfs are often surprisingly dense, with about the mass of the Sun but about the size of Earth.

Only a small fraction of stars, perhaps less than 1%, end their lives withsupernova explosionThe form emits a huge roar, and in the end only a spectacular remnant is left. When astronomers pointed the Hubble Space Telescope in the direction of thermonuclear supernova SN 2012Z, they were surprised to find that there was still a star there.

this onewhite dwarfWith another star, commonly referred to as a binary system, gravitationally locked in orbit, its powerful gravitational pull swept away a lot of material from the unfortunate companion.

The white dwarf then reached a mass threshold — about 1.4 times that of the Sun — causing a thermonuclear reaction at its core, a supernova explosion, an event that was supposed to kill the white dwarf.

This researchPublished this month in The Astrophysical Journal, lead author Curtis McCully, a postdoctoral researcher at UC Santa Barbara and Las Cumbres Observatory, said: We were very surprised that the star itself was not destroyed and actually survived and was much brighter than it was before the explosion.”

“No one expected to see a brighter surviving star. That was a mystery,” he said.

“During the explosion, radioactive material is created. That’s what drives the brightness of the supernova. Some of that material is left in the surviving remnant and used as fuel to heat the remnant,” McCulley added.

Andy Howell, a professor at the University of California, Santa Barbara, a co-author of the study, said in a paperstatement“The surviving star is a bit like Obi-Wan Kenobi from Star Wars coming back as a force ghost. Nature tried to bring down the star, but when it came back Stronger than we thought. It’s still the same star, but it’s back in a different form. It’s beyond death.”

The white dwarf is located in a spiral galaxy called NGC 1309, about three-quarters the size of our Milky Way. Like the Milky Way, NGC 1309 resembles a spinning pinwheel when viewed from above or below. The white dwarf is 108 million light-years from Earth.

The discovery of this star could help scientists better understand “Type Ia” supernovae. A Type Ia supernova is a type of supernova that occurs in a binary star system (two stars orbiting each other) where one star is a white dwarf and the other star can be as large as a giant or as small as a white dwarf.

In these cases, the white dwarf experienced runaway carbon and oxygen nuclear fusion after gaining material relatively quickly, just as the white dwarf stole material from its companion star. But the explosion didn’t destroy the white dwarf, leaving an “undead” remnant.

“It is for this reason that we refer to these objects as ‘zombie star‘. They are dead, but not quite dead yet. Early on, many supernova simulations by scientists failed before they could blow up the entire white dwarf. This exciting discovery could tell us about the actual physics of these supernovae. ‘ said McCully.

Scientists have discovered about 50 supernovae of this type so far, but until now no surviving “zombie star” white dwarf has been identified.

Exotics like this zombie star may help change that, the researchers hope. “Now we need to understand what makes a supernova fail,” McCulley said.